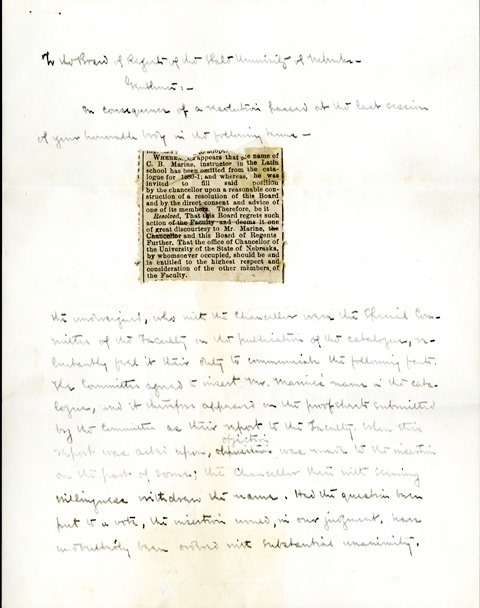 Letter from Aughey and Woodberry to the Board of Regents

To the Board of Regents of this State University of Nebraska -

WHERE it appears that the name of
C. B. Marine, instructor in the Latin
school has been omitted from the cata-
logue for 1880-1; and wheras, he was
invited to fill said position
by the chancellor upon a reasonable con-
struction of a resolution of this Board
and by the direct consent and advice of
on of its members. Therefore, be it
Resolved, That this Board regrets such
action of the Faculty and deems it one
of great discourtesy to Mr. Marine, the
Chancellor and this Board of Regents
Further, That the office of Chancellor of
the University of the State of Nebraska,
by whomsoever occupied, should be an
is entitled to the highest respect and
consideration of the other members of
the Faculty.

this underligned, who with the Chancellor were the Special Com-
mittee of the Faculty on the publication of the catalogue, re-
luctantly feel it their duty to communitcate the followig facts.
The Committee agreed to insert Mr. Marine's name in the cata-
logue, and it therefore appears in the proofsheets submitted
by the Committee as their report of the Faculty. When this
report was acted upon, objection was made to the insertion
on the part of some; the Chancellor then with seeming
willingness withdrew the name. Had this question been
put to a vote, the insertion would, in our judgment, have
indubidibly been ordered with substantial unanimity. 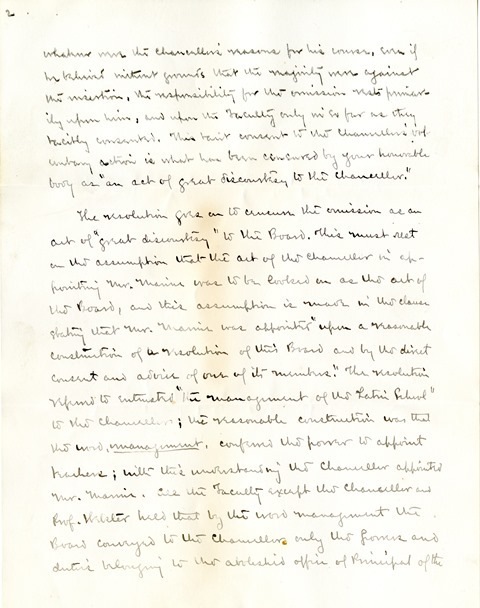 Whatever were the Chancellor's reasons for his course, even if
he believed without grounds that the majority were against
the insertion, the responsibility for the omission rests primar-
ily upon him, and when the Faculty only in so far as they
tacitly consented. This fair consent to the Chancellor's vol-
untary action is what has been censured by your honorable
body as "an act of great discourtesy to the Chancellor."

The resolution gives us to censure the omission as an
act of "great discourtesy" to the Board. This must rest
on the assumption that the act of the Chancellor in ap-
pointing Mr. Marine was to be looked on as the act of
the Board, and this assumption is more in the clause
stating that Mr. Marine was appointed "when a reasonable
construction of a resolution of this Board and by the direct
consent and advice of one of its members." The resolution
referred to entrusted "the management of the Latin School"
is the Chancellor; the reasonable construction was that
the word, management, conferred the former to appoint
teachers; with this understanding the Chancellor appointed
Mr. Marine. All the Faculty except the Chancellor and
Prof. Walker held that by the word management the
Board conveyed to the Chancellor only the powers and
duties belonging to the abolished office of Principal of the

Latin School; to appoint teachers and contract debts unprovided
for by specific appropriation seemed powers not likely to be
granted by the Board indirectly and not in express terms; and
the Faculty felt the more certain in its interpretation because
there was no necessity whatever for the appointment of anyone
by the Chancellor, your honorable body having specifically ap-
propriated sufficient money to pay for the additional teaching
needed, and having entrusted its expenditure to the Faculty.
The Chancellor himself warned in the exercise of his assumed
powers; he first tried to delay Mr. Marine, and failing in that
he next attempts to have the Faculty appoint Mr. Marine
under the power expressly granted there. On enquiry it
then appeared that, except for Prof. Walker's testimony of the
general good character of Mr. Marine, no one, not even
the Chancellor, knew anything of Mr. Marine's expensive
abilities or acquirement, and that not our letter of re-
commendation had ever been presented or asked for or
was then attainable; these remarks are not more to
cast any [--Illegible Word--] upon Mr. Marine's fitness for his past;
but only to share the fact that no evidence of Mr. Marine's
scholarship or talent, was then known, - a fact which
[--Illegible Word--] the Faculty to enjoy him until further in-
formation could be had, especially on a graduate of 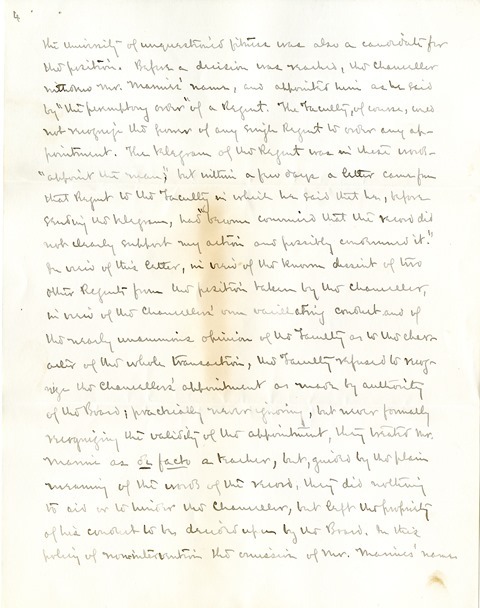 the University of unquestioned fitness was also a candidate for
the position. Before a decision was reached, the Chancellor
withdrew Mr. Marine's name, and appointed him as he paid
by "the [--Illegible Word--] over" of a Regent. The Faculty, of course, could
not recognize the power of any single Regent to order any ap-
pointment. The telegram of the Regent was in these words -
"appoint the man;" but within a few days a letter came from
that Regent to the Faculty in which he said that he, before
seding the telegram, had "become comcerened that the record did
not clearly support my action and possibly condemned it."
In view of this letter, in view of the known dissent of two
other Regents from the position taken by the Chancellor,
in view of the Chancellor's over [--Illegible Word--] conduct and of
the nearly unanimous opinion of the Faculty as to the char-
acter of the whole transaction, the Faculty refused to recog-
nize the Chancellor's appointment as made by authority
of the Board; practically never ignoring, but never formally
recognizeing the validity of the appointment, they treated Mr.
Marine as defacto a teacher, but, guided by the plain
meaning of the words of the record, they did noting
to aid or to hinder the Chancellor, but left the propriety
of his conduct to be decided upon by the Board. In this
policy of the nonintervention the omission of Mr. Marine's name 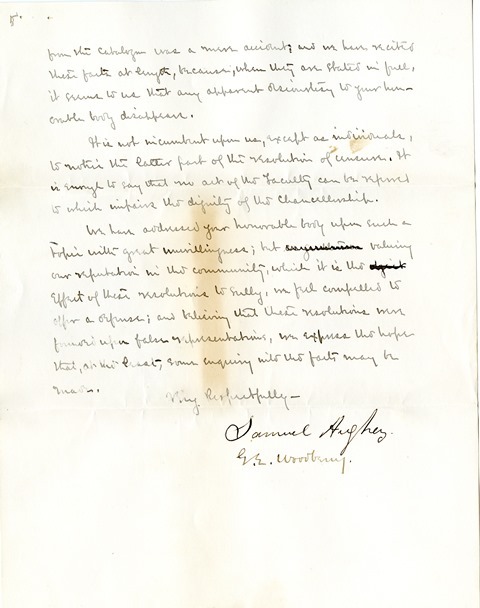 from the catalogue was a mere accident; and we have recited
these facts at length, because, when they are stated in full,
it seems to us that any apparent discourtesy to your hon-
orable body disappears.

It is not incumbent upon us, exept as individuals,
to notice the latter part of the resolution of censure. It
is [--Illegible Word--] to say that no act of the Faculty can be referred
to which impairs teh dignity of the Chancellorship.

We have addressed your honorable body upon such a
topic with great unwillingness; but XXXXXXX valuing
our reputation in the community, which it is the XXXX
effect of these resolutions to sully, we feel conpelled to
offer a defense; and believing that these resolutions were
founded upon false representations, we express the hope
that, at the least, some enquiry into the fact may be
made.