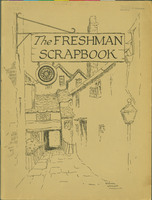 'Twas the night of exam week, when all through the house

Every co-ed was cramming, ruffled up like a grouse,

Her papers thrown down in a fit of despair,

And her mud-stained galoshes kicked off on the stair.

Her brain settled down for some thoughts of the test,

With the hope that no day-dream her mind would molest;

But out of her book there arose such a smatter

Charles I is to marry the Infant of Spain,

Behold her sour face with a grimace of pain;

Marconi, a food that is hard to digest;

An ancient inventor was Edgar A. Guest;

Lord Lister, the maker of our Listerine,

Said, ‘Don’t halitose us, but keep your mouth clean.’

Moliere was a swordsman of fame and renown;

Mother Goose was famed for her eider-down gown;

Napoleon III was a marvelous steed,

Who beat even Spark Plug when it came to great speed;

New Jersey’s a tight kind of sweater, you know,

And Magna the Charta was a famous young beau.”

Then into her mind with nary a rest

Crept her swaggering sheik on some dubious quest;

And what to her wondering brain should appear,

But a tumbled-down Ford with a lamp in the rear,

And a cake-eater driver, who, by his bright car,

She knew in a jiffy was young Lochinvar.

He drove with both arms, but he drove all alone;

He stopped by the curb, and he grabbed up a stone;

And he beat a tattoo on his fair steady’s door:

“Come out, oh do come, my most lovely Lenore!”

Quoth the maiden, weak and weary,

As she grabbed her pony, black and bleary,

“I will cram nevermore, nevermore!”

Jennie Lind, The Freshman Scrapbook, May 1926