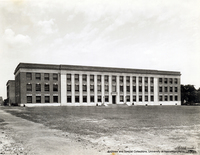 From Vol. 1 No. 2 of The Freshman Scrapbook:

"This issue marks the second number of THE FRESHMAN SCRAPBOOK, a magazine sponsored by the Teachers of English and designed to appear from time to time in the interest of Freshman students in the University of Nebraska. All the contributors to this publication are now registered in beginning English courses."

As stated above, the Freshman Scrapbook was invented as a way to both inspire prospective students to publication status even as freshman at a large University as well as to acknowledge the wonderful, and often undervalued, writing that occurs in small classrooms across the nation.

At this time, The Kiote was still being published, but interest in it had waned, and often those published in it were upperclassmen or experienced writers of any genre. The Freshman Scrapbook gave students an opportunity to be involved; to feel as though they belonged; and to show their parents what they had accomplished in college so far. Its run was short, only lasting from 1924 to 1927.

In the next sections, you can peruse some of the writing present in these editions, including works by Loren C. Eisley and other freshman students, truly getting a picture of both English classes and the minds of a student at UNL in the 1920s.