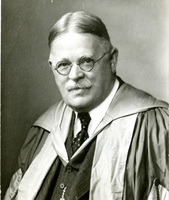 A native of Lincoln, Nebraska, Nathan Roscoe Pound received his bachelor's, master's, and doctorate degrees in botany from the University of Nebraska.  During his years as a student at the university, Roscoe Pound would work closely with many prominent faculty members, namely Charles Bessey.  Though he had a professional education in botany, Pound's family background likely influenced his surprising career choice.  As the son of a lawyer and judge, Pound decided to leave behind his education in botany and pursue a degree in law.  He began his study at Harvard University, but returned to Nebraska after only one year to start his own practice, without an official degree.  Pound's knowledge of law was so astounding that he was admitted to the Nebraska Bar and allowed to teach at the University of Nebraska after only one year of schooling.  Roscoe Pound was a professor of law at the university from 1899 to 1907 (Roscoe).