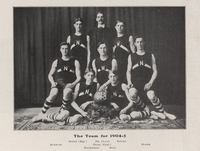 During the 1900's students had taken an interest in athletics, especially football. The baseball team was average, often times finishing with a winning season. Track had some talented students, but they had to struggle against Nebraska winds and a poor track. Basketball was in its early stages, being invented only in 1891 and being added to the athletic curriculum in 1900. Then, a team only consisted of six or seven total members (Sombrero 1902, 1904, 1906).

However, Nebraska's true enthusiasm was aimed at football. By 1901 the team was identified as the Cornhuskers and the team colors were selected as scarlet and cream (Knoll). In 1902 the Cornhuskers were undefeated and not a single team even scored against their defense (Sombrero 1904). The Lincoln Journal commented, "Nebraska occupies a unique position in western football. Too strong to find fearful competitors, the Cornhuskers can almost weep with Alexander the Great because they have no more teams to conquer" (Knoll).

The success of the football team was in large part thanks to Coach Walter C. "Bummy" Booth. Coaching from 1900 to 1905, Booth's teams produced a 24-game winning streak, 27 counting exhibition games. Following Booth, also with much success, was Coach William C. "King" Cole. He led the Cornhuskers to two conference titles and in his last game coaching the Cornhuskers defeated Haskell, 119-0, which still ranks as the most points a Nebraska football team has ever scored (Nebraska Football).