Already well-known amongst Nebraskans, his election was met with approval. A correspondent to the World-Herald said, "Action of the board in generally regarded as an extremely fortunate one. Dr. Andrews is not only one of the best known of living American writers and lecturers on historical and economic subjects, but his standing as an educator of high administrative and executive ability is recognized throughout the country" (Manley). In his inauguration speech, Andrews emphasized his belief in the need for complete academic freedom within the University and asserted taht professors must be free of outside pressures and influences. This belief influenced much that Andrews accomplished at Nebraska, from the nature of the curriculum to the quality of the faculty.

Andrews was loved amongst his students and faculty. He had an "infectious good humor" and enthusiastic chapel talks. He never forgot his responsibility to the local undergraduates, even using his own money to help those in need of financial aid. His students affectionatley referrred to him as "Bennie" and when he spoke at events he commonly recieved an ovation (Knoll). In 1902 he was offered to head the University of Wisconsin with a large increase in salary. When students learned of the news they organized rallies, urging Andrews to remain at Nebraska. Many of his colleagues even offered to contribute a part of their salraries to make up the difference in the salary he would recieve upon taking the Wisconsin offer. However, Andrews turned down the job and refused the increas in salary, choosing to stay at Nebraska (Manley). Students and faculty, alike, were overjoyed. 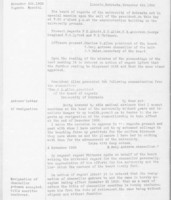 During Andrew's reign new buildings were added on both city and farm campuses, new colleges and departments were formed, and significant achievements were made in agricultural education and experimentation. Andrews led the University to a position of national prominence, and in 1909 the University was admitted into membership in the Association of American Universities (Manley). Andrew's resigned in 1909 due to poor health and was named chancellor emeritus.