While at the University, Pershing made some very significant contributions to the military department at the college, spent some time teaching geometry, and also got his law degree during his time here as well. Looking at his time here helps give a better understanding of some of the reasons he is so well known at the university. 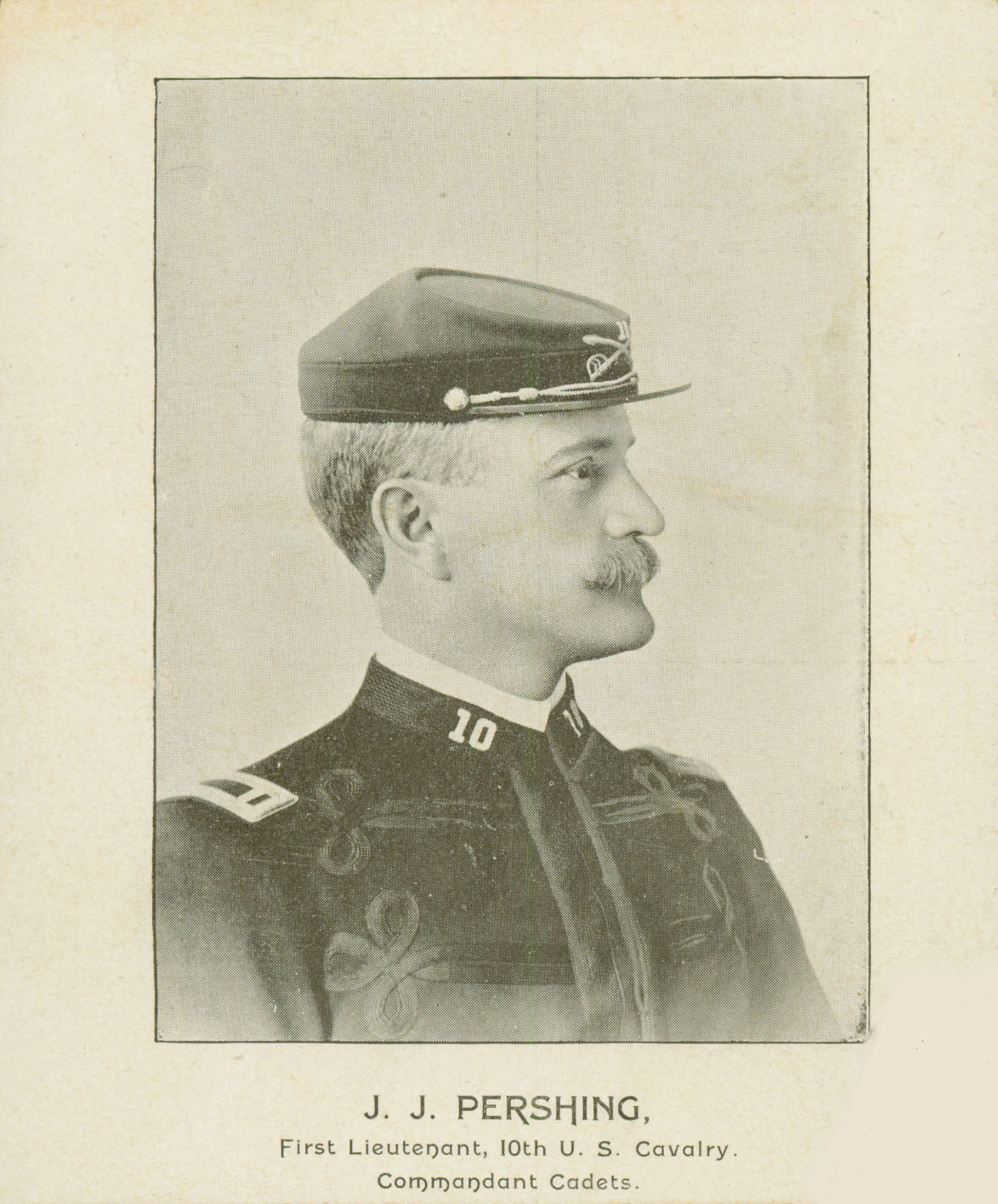 Head of the Military Department

When Pershing arrived at the University of Nebraska, the Military Department was in a relatively sorry state, suffering from lack of morale and motivation on the parts of the cadets.  His first, and perhaps one of the most significant, change he made was the way promotions were handled.  Up to his arrival, promotions had depended upon the number of years a cadet drilled and upon favoritism.  On October 5th, 1892, Pershing revoked all previous appointments and made new appointments based on a new promotion system, one based on terms served, academics, and military ability and potentional. (History of the Military Dept. p15)

Pershing improved the morale among the cadets in many other ways as well, improving discipline  and pride in the department through things like more accountabiity through inspections, rifle battalions (more information under Pershing Rifle Sections), and the first Military Ball. In fact, when Pershing came to the university there were only 90 cadets, soon after Pershing began as head of the Military Department the number of cadets jumped to 350. Chancellor Canfield wrote that no other university department was making such rapid growth, "or has made a deeper impression on the people of the city and state." Pershing created a large impact on the cadets, some were noted to clean their equipment and practice their manual of arms so much that the faculty complained the cadets studies were lacking and that military drill be reduced or abandoned. Fortunately Chancellor Canfield liked Pershing and the military program, even suggesting that some of the professors take military training. (Smith)

One of the problems faced by Pershing once becoming head of the Military Department was that "the cadets had an imprecise conception of the value of attendance." Many of the cadets had to work their way through the university selling newspapers, waiting tables in cafes around town, serving as janitors, or any odd job available. The cadets stated that they were tired and felt military training was a burden and simply skipped training. Pershing understood the cadets reasoning, but skipping simply was not an option. Pershing considedered training a required subject, and said "whenever at all possible I insisted on the student's attendance." Some cadets resisted, but the cadets no longer skipped. Despite having a small number of cadets that were upset with the increase in work and punctuality, Pershing's popularity grew immensely. He was greatly admired by the cadets, and had a lasting impact on the department that the university benefitted from for years to come. (Smith) 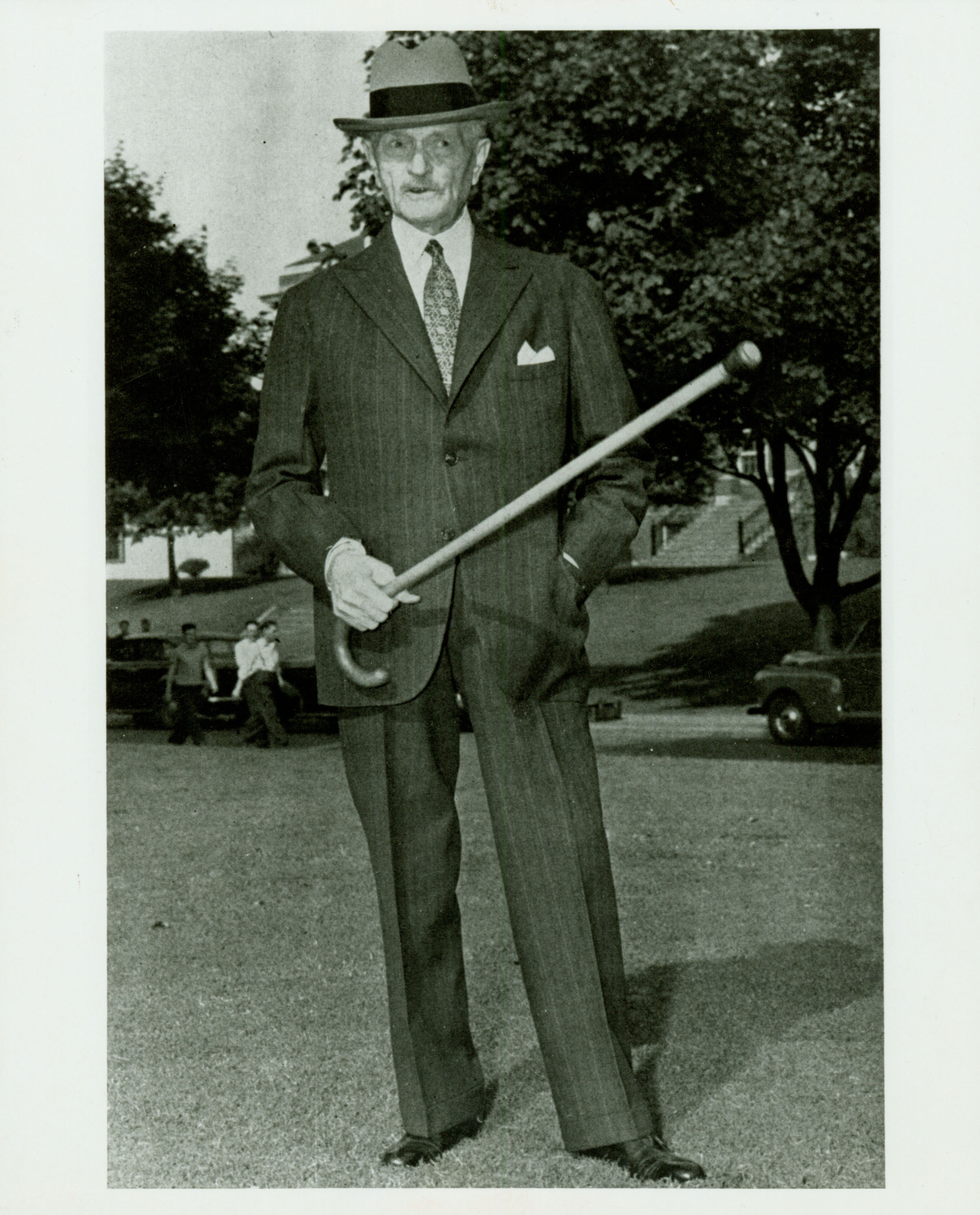 The Lighter Side of General Pershing

Pershing was always very professional and respectful in all of his endeavors at the university. He put a lot of time and hard work into rebuilding the Military Program to what it is now. Pershing was well liked, and as a result had numerous friends from his time at the university. Pershing also had some rather interesting stories that show a more fun loving person than we are accustomed to regarding his amazing military career.

One of these stories occurred  in November 1892, after Pershing was promoted to first lieutenant. He celebrated his promotion with friends in his rooms in Hall-Lansing Block. After serious drinking they decided to organize the First Nebraska, Pershing to command, his troops consisting of the half-dozen young men eating the meal one of them prepared. While with his friends Pershing was easy going and accomodating, even allegedly jumping out of a window with good friend and local lawyer Charles G. Dawes to escape police raiding an illegal prizefight. Pershing was noted to be one of the best dancers in Lincoln alongside Dawes. Pershing and Dawes often went to dances, but Pershing never danced with one acquaintance for very long. Dawes, would write Pershing years later that Pershing "concealed pretty well from your scholars some of your predominant characteristics which included a taste for the adventerous and skirting along the boundary lines of professional decorum." (Smith)

Besides teaching mathematics, getting his law degree, and being head of the Military Department Pershing also taught fencing to Dorothy Canfield (Chancellor Canfield's daughter) and Willa Cather. Both of these women went on to pursue successful careers in literature. In later years Pershing wryly remarked that he didn't know that he'd done a great deal for their future writing endeavors. (Smith)

Pershing began law school at the university upon Chancellor Canfield's suggestion that he should pursue a law degree. The Chancellor recommended this because he noticed that Pershing had a lot of time on his hands, and that this would be a productive outlet for his time. Pershing was very interested in law, in fact he would sometimes talk about entering a law career after his degree. Pershing talked about this with local lawyer and friend Charles G. Dawes. (Smith)

Pershing began his law school career here at Lincoln in 1892 under Dean Smith. The law school during this time had virtually nothing except a couple wooden chairs, bulletin board, and a manuscript holder. Pershing grew to like the serious professor, Dean Smith, who found legal exposition interesting, but Pershing more importantly enjoyed the new friendship of his fellow classmates. Intrigued by law since his days at West Point, Pershing now had a chance to endulge in this interest. He was far ahead of his classmates, the formal learning of law fastened a glorious discipline on his mind. Pershing and one of his fellow classmates and friends Elmer Burkett became very involved and critical of Smith's lectures. Regardless, "the teacher struck sparks on his abrasive students." (Vandiver) This is especially evident of Pershing, considering how much he thought about becoming a lawyer and entering civilian life after receiveing his degree in the last year of his assignment to the university in 1894-95. (O'Connor)

There were numerous factors in Pershing's mind on whether or not to enter civilian life. Truthfully, Pershing had never set on being fully committed to a lifetime of soldiering. He entered West Point because of the educational oppurtunities it offered, and stayed in the military because he felt he owed it to the government. He had lost for the time being, the romanticism of war and other aspects of a military career. These aspects were the narrowness, its caste consciousness, and its smug self-efficiecny. Another concern was that of his mother's hopes that he would leave the army, this was because of the memory of her brother being brought back maimed and helpless from the siege of Vicksburg. There were other more practical reasons for leaving the service as well. One of these concerns was his age, Pershing believed that this was the age where a man needs to make sure of his course before it is too late. He had doubts to whether he had any real future in the Army, and a number of his classmates had resigned their commissions and were successful in civilian life. (O'Connor)

Even through all of these doubts, Pershing still decided to stay with the army. He had become familiar with the military, and also knew that beginning his law career would not be easy. After this time of temporary unsureness, Pershing never again was tempted to change professions.

While at the university General Pershing taught mathematics, military science and tactics, fencing as well as being head of the military department. Pershing informed Chancellor Canfield that he was there to both teach and to learn. The school happened to be short of mathemativs instructors, so he volunteered to take classes in that field in addition to his other duties. (O'Connor)

He taught every school day for three hours "with as much success as he had with his cadets" remarked Chancellor Canfield. Interestingly, the Chancellor's daughter, Dorothy Canfield, stated that General Pershing taught math more like a military general than a professor. Another notable student of Pershing's was Willa Cather, Pershing was once quoted saying "I doubt that the study of mathematics gave either one of them a taste for literature." All in all, Pershing put as much effort as he did for anything in teaching mathematics and served the university the best he could. (Smith)

Despite Pershing's teaching methods being relentlessly military, according to student Alvin Johnson, he was still admired and liked by students. One student in particular liked Pershing, and for good reason. This student was struggling when called to the board with others to demonstrate a proof. The young student battled to answer the question, but even after several agonizing minutes he could not demonstrate the proof. Pershing told the young man to stay after class, the youth grew nervous. Pershing said gently to the youth, "all that kept you form working out that problem was your nervousness. I have marked you as though you had succeeded." This act of kindness and understanding formed a bond of shyness and the two quickly became friends. Pershing kept reinforcing the student's courage which finally gave him confidence. Pershing's support of the student led to a family's firm affection of the teacher. (Vandiver)