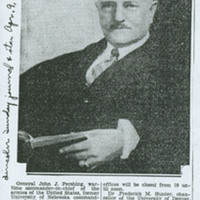 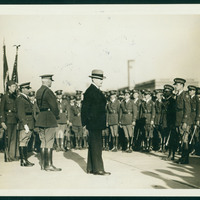 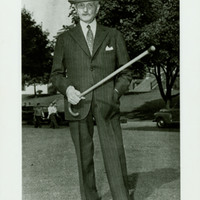 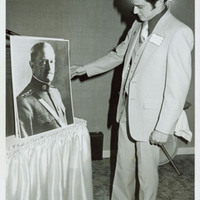 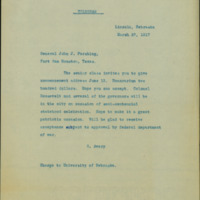 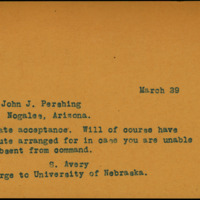 "Pershing Auditorium, Pershing Road, Pershing School, Pershing Armory, Pershing Rifles. All are familiar Lincoln names that give the suspicion that Pershing has been in town. Never was a conclusion more correct." That's how the Sunday Journal and Star put it on September 7, 1975. These and more, including the Pershing Theater and Pershing Center, are evidence that we still see today that General John J. Pershing had an impact in Lincoln. General Pershing certainly had an impact on the city (then just a town) of Lincoln and all of Nebraska. Perhaps one of his biggest legacies is the formation of Pershing Rifles. It all started as an idea by Pershing to enhance the pride of his cadets in the military and their university, and through hard work and success in competition, a full squad was established, at the time called the Varsity Rifles. (Pershing Rifles C12 ABN)

The other major part of his legacy is on a more local level, and that his impact on the community and the university here in Lincoln. His changes in the military department put the university on the map nationally for its reputation. He converted the low morale cadets he started with into an organized group of disciplined and proud men. His students greatly admired him.  Not only that, but the community admired him as well. Pershing was known for mingling about the town, especially on his fabled pony, as well as attending parties, picnics, hunting trips, and dining at Don Cameron's resaurant with young men with low incomes. Pershing came back to Lincoln many times  after his time ended as a faculty, to see friends and family, as well as for university and community events, for example the address to cadets pictured, taken in 1933, or his commencement address in 1921. One instance that got major attention in the state and nation was when he tried to do a commencement address in 1917 as well, but was called upon to lead the American Expeditionary Forces at the start of World War I. The letters between Chancellor Avery and Pershing about the 1917 commencement address are located at the top of the page and in the gallery. (Vandiver)

There are many ways that General Pershing is memorialized and remembered in the city of Lincoln, and this is because of the significance of his contributions to not only the university and the community, but also to his contributions to the nation. Even with all of his national renown for his achievements in the military, Lincoln has always been a special place for Pershing. He was quoted as saying "I have always considered Nebraska at least one of my homes, but today I confess that is the most important of them all." (Lincoln Journal and Star)