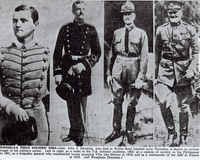 John J. Pershing was born September 13, 1860, in Laclede Missouri to John Fletcher Pershing and Ann Elizabeth Thompson.  He graduated from the United States Military Academy and was assigned to the 6th cavalry in 1886 and participated in campaigns in the Southwest and Northern Plains, including the Wounded Knee campaign.  He was then assigned to the University of Nebraska as a professor of military science and tactics (see Pershing at UNL) between 1891 and 1895, and during his time also received his degree in law.  In the next few years he moved around to various military posts, serving in Montana, teaching tactics at West Point, serving in Cuba, and then returning to regular captaincy in 1901, assigned to the 1st Cavalry.  Up to 1903, he served in the Philippines as a departmental adjutant general, an engineer officer, and a cavalry squadron commander in actions against the Moros, and in 1903 and 1904, was on the War Department Staff.  In 1905 he married Frances Warren, daughter of a politician named Francis Warren. (Vandiver)

In 1905 and 1906 he was sent as an observer to Japan during the Russo-Japanese War.  One of the most controversial points of Pershing's career came in September of 1906 when he was promoted, at President Roosevelt's nomination, to brigadier general over 862 other senior-ranking officers.  He commanded Fort McKinley in 1907 and 1908 and then was assigned to the Chief of Staff.  From 1914 to 1916 he commanded the 8th Infantry Brigade in San Francisco, where, in 1915, his wife and three daughters died in a tragic house fire.  In October of 1917, Pershing was promoted to the rank of General, and led the American Expeditionary Forces in France at the start of World War I.  From 1921 to 1924 he was Chief of Staff of the United States Army, and in September of 1924, he retired from active service.  He was chairman of the American Battle Monuments Commisssion for the remainder of his life, and he died in Washington D.C. on July 15, 1948. (Smith)