The NFWC Plaque and It's Abduction 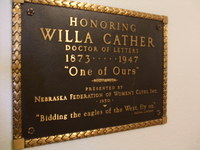 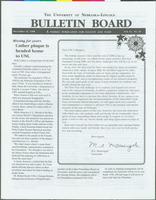 On the second floor of Andrews Hall, a plaque mounts a wall outside the main office.  The plaque looks to be in fairly good condition, despite being sixty years old, and especially it's history. [13, 14] It honors "Willa Cather, Doctor of Letters", and is marked with the years of her life, and the title of one of her books, "One of Ours".  It also includes a quotation from poet Vachel Lindsay, unfortunately misspelled on the plaque itself.  The plaque, as a whole, honors the literary work of Willa Cather after going to the University, and celebrates her life.  The meaning of "One of Ours" on the plaque and the reasoning behind it are unknown.  It could be a reference to her days at the university, making her literally "One of Ours," if the "we" refers to the university.  However, it could also refer to Nebraska in general, or to the NFWC as an organization.

The plaque is marked for 1950, though it didn't come to the University right away.  It was dedicated by the Nebraska Federation of Women's Clubs at their 55th Annual State Convention in March of 1951 (the convention went from the 28th until the 30th).  In the Love Library Auditorium, Mrs. E. A. Creighton, the State Chairman of Art, directed the presentation and acceptance of two plaques, one of which being the Cather plaque.  Mrs. Mildred R. Bennett of Red Cloud, NE, Cather's childhood home. [6] Since the plaque was dedicated only four years after Cather's death, it is likely that it was intedned to commemorate not only Cather's death but also her years of work as a prominant author.  The fact that it was a women's club likely suggests that the club was serving its purpose in honoring prominent women.

The plaque stayed in Andrews Hall untill 1969, the year Andrews Hall was renovated.  During this renovation period, the plaque mysteriously went missing.  It remained lost until late October nearly twenty years later when it was found along a creek in Barton County, Kansas by a detective of the Barton county sheriff's office.  Through their research, the detectives found an organization dedicated to Cather, situated in Red Cloud.  A notice was placed in the Willa Cather Pioneer Memorial and Educational Foundation newspaper in Red Cloud Nebraska.  It just so happened that the notice was seen by Dr. Robert Knoll of the University of Nebraska, who remembered it going missing years earlier.  The plaque was then brought back to the University in 1989 where it sits in Andrews Hall, after a restoration of the bronze. [13, 14]

← Cather's Life
Cather Garden →
The NFWC Plaque and It's Abduction