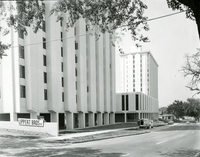 Late in 1963, two multi-story dormitories finished construction as an addition to the Neihardt dormitory, creating the Cather-Pound-Neihardt (CPN) grouping of dormitories, lounges, and a dining hall.  The buildings are located on 17th street, Cather Hall being the northern building and Pound Hall being the southern.  The Cather dormitory iwas the first multi-storied building to be constructed on city campus.  The buildings were named such at the Board of Regents meeting of February 2 in 1963. [7, 12] Only two years later, the nearby Abel/Sandoz dorm complex completed construction. [4] It is very likely that the choice to name each of these buildings as they were was arbitrary at best.  Cather dormitory was built because of the rising need for additional housing at the university which explains why Cather's name was "thrown" on it.

There are plans that in a couple of years both the Cather and Pound dormitories have the possibility of being knocked down.  Considering they are both very old droms, repairing them would be incredibily expensive.  These two dorms would be replaced with more suite-style resident halls. [18]  Whether these new resident halls would take on the names of Cather and Pound is unknown right now but Cather could very easily lose a spot on campus.

Cather and Pound halls, the two high-rise resident halls on campus were imploded on December 22, 2017.