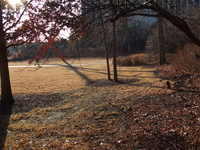 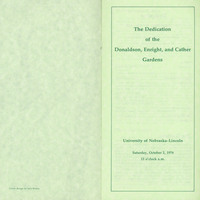 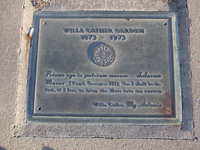 Cather Garden is located just to the West of the Love Library.  It was designed and built to unify the core of the University of Nebraska-Lincoln City Campus.  The idea was concieved in the centennial year of Willa Cather's birth, 1973, and completed only three years later.  It is very unique and distinguished in that the plants are all native plants and materials that would have been famiailiar to Cather and to the Nebraska area.  These materials include Birch, Black Hills Sruce, and Cottonwood trees, along with native roses well known to her.  In the garden there is also a plaque commemorating the garden to Cather.

Cather Garden was dedicated along with the Donaldson and Enright Gardens on Saturday, October 2, 1976 by Chancellor Roy A. Young who was the master of ceremonies for the dedication.  It was named after Cather in recognition of her rich contribution to the heritage of NE.  In the words of NU Buisness Manager Dr. Ronald W. Wright, "It recieves the last rays of the setting sun, symbolizing the rich traditions of the University of Nebraska, its alumni, and former students." [1]

← The NFWC Plaque and It's Abduction
Cather Hall →
Cather Garden