Raising Money with the Alumni Association and "O" Street Gang 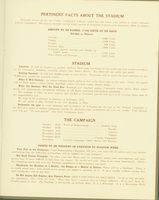 The Alumni Association was given the task of raising funds for the stadium.  They set up a committee that was headed by the alumni secretary to go out and gather pledges from alumni and from citizens of Lincoln and Omaha, as well as the surrounding region in general.  They published in booklets the reasons behind the need to raise funds for the stadium as well as the amount needed for the stadium, which was set at 17,200 units of $25 each, which totals to $430,000 as the proposed cost for the project (Fundraising Pamphlet, Nebraska Alumni Association).  By showing what other institutions throughout the country were doing at the time, and by showing people that the stadium was meant to be a memorial to Nebraska's veterans, the Association was successful and was able to receive enough pledges to have the stadium built. 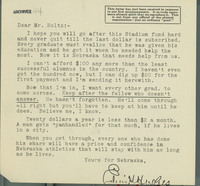 In 1920, Vincent C. Hascall, a former quarterback for Nebraska in the early 1910's, came back to the University as alumni secretary.  He set up a committee to begin raising the funds necessary to get the proposed stadium built. Hascall was also a member of the Nebraska Memorial Association, where he was executive secretary.

In 1922, Harold Holtz, a veteran and alumnus, became the alumni secretary, taking over the work that Hascall had started before him.  Due to his dedication and hard work at getting alumni to pledge funds to the Memorial Stadium Fund (Correspondence, Unknown to Harold Holtz), the alumni association was able to raise over $300,000 to be put towards building Memorial Stadium (Knoll, p. 76).

Holmes and the "O-Street Gang"

In order for the stadium building to get underway, the pledges that the Alumni Association had received needed to be converted into a loan.  However, no banks at the time would put out a loan with just pledges as collateral, so George Holmes, president of First National Bank, personally offered to underwrite the loan (Knoll, pp. 76-77).  Members of the Nebraska Athletic Building Association, which was made up of prominent citizens of Lincoln and the surrounding area, also offered to back the loan.  This group of backers became known as the "O-Street Gang", and are personally responsible for getting the stadium project paid for.

Paying for The Stadium

The First Trust Company then issued bonds for the project, which were all retired on time because all of the stadium pledges were paid in full on time.  This was laregly due to  the fact that gate receipts were provided a steady stream of income which was evidence of a strong supporting from Nebraska fans.  Payments for the loan was also helped greatly by people throughout the state and in Lincoln.  The student body was instrumental in getting the loan paid for ("Drive for Stadium Began Over a Year Ago", Daily Nebraskan).  Inmates from the State Penitentiary in Lincoln were also passionate about helping to pay for the loan.  Although they had few resources to give, the inmates were willing to sacrifice what they had to ensure that Memorial Stadium was built.  This is just one prime example that shows the dedication for the University was strong throughout the state ("Pen Inmates Give to Building of Stadium", Daily Nebraskan).