During the 1910s at the University of Nebraska, the community had arguably the largest impact on the university that it has ever had. The people became disheartened with the university in the early 1910s, causing some changes and a celebration, they had a large, and deciding, say in campus relocation/expansion, they added to the uproar that the loyalty trials brought, and they provided the backbone for American support on the homefront during World War I. At this time, the people of the state truly became invested in and tied to the university, leaving the strong bonds that last to this day. 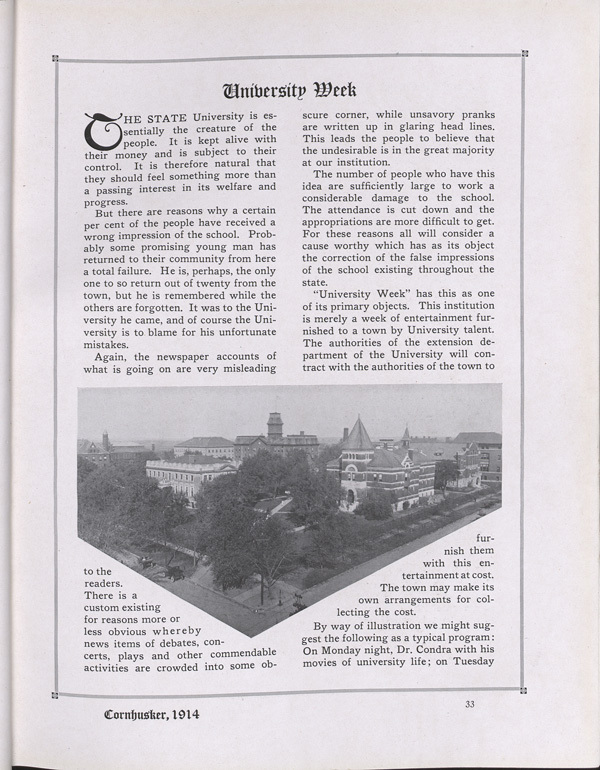 As the 1910s began, the state of Nebraska began to feel uneasy about its young university. The people had seen young men and women go off to the university only to return four years later without improvement, and sometimes worse off than before they went. The newspapers were full of stories of fraternity boys pulling pranks and goofing off instead of studying. Even when they did study, they didn’t learn anything because the university was a mediocre educational institution (1914).

The 1914 Cornhusker, hoped to change that perception of the university and its fraternities. It explained the true function of fraternities in creating loyalty and showed how they foster competition that helps them produce the best men once four years are over. It also showed the advantages that working in groups often brings and the ways in which group participation encourage societal participation and growth for the future (1914).

In order to be completely open to the public, and to try and prove the criticisms wrong, the 1914 Cornhusker also proposed a one-week showcase of the university's talents called "University Week." It would include performances by the band, debate team, glee club, and drama club that would bring popularity and public favor back to the university (1914).

Schools throughout Nebraska, and throughout the country, suffered during World War I as a result of many teachers joining the military. Teachers were needed for many subjects, ranging from Math to PE to the fine and performing arts (Demand). According to enrollment information from later that year, there was only a slight decrease in the number of students in the Teachers College (about 6%), with a slight increase in the number of women in the college. The Graduate School of Education, however, lost about 21% of its students, in line with the university average of 23% (Registration).