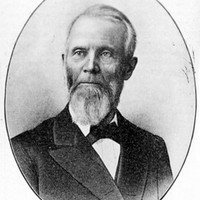 As the first chancellor of the school, Allen R. Benton’s main goal was setting the standard for education in Nebraska. Most people had an unsatisfactory secondary education, so Benton required entry into the Latin School.  This helped to prepare students for the more rigorous coursework at the university level by providing them with discipline in Latin, Arithmetic, Rhetoric, and other courses deemed necessary for higher learning.

Elected to the chancellor’s position in 1876, Edmund B. Fairfield was a very successful man, starting his college education at the age of 15. He was recommended to the Chancellor's position by several educators from Michigan and a U.S. Senator. Being a very religious man, he allowed some religion to slip back into the world of public education instead of separating religion and state completely.

Henry E. Hitchcock, previously the professor of mathematics and then the Dean of Faculty, was elected temporary chancellor of the school in 1882. He purged many members of the faculty that he deemed unfit, replacing them and increasing the number of teachers dramatically in a short time, including three of the ‘Sampsons’ of the school. He also instituted the Medical College and made the Industrial College more distinguishable from the rest of the University as well.

James Irving Manatt was elected chancellor in 1884, replacing Hitchcock and returning him to his former post as Professor of Mathematics. He taught Greek Literature and Language while chancellor until Bessey took over in 1888.

There were many issues remaining from Manatt’s term, such as unwritten letters letters, proposals by the board of governors left unanswered, etc., which Bessey was diligent in fixing right away. Bessey was the first chancellor to select his successor, inviting James H. Canfield into the college in 1891.

(The University of Nebraska)