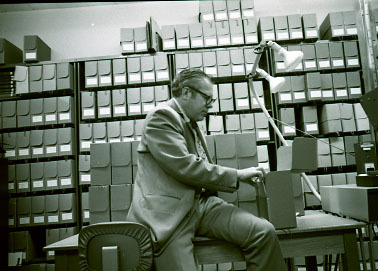 Joseph Svoboda began his career as University Archivist on July 1, 1968, following the formal establishment of the University Archives by the Board of Regents. His appointment started with a salary of $10,000 per year. (BOR, 1968)

University records at the time Svoboda started were scattered within the Libraries or in department or college offices and file cabinets across campus. Early librarians, faculty, and alumni saved documents, photographs, and other records on administration and history of the university that provided a foundation for the archives.

In a 1969 Daily Nebraskan article, Svoboda explained that most records were housed in the basement of Love Library. He planned to get things organized, a process archivists still understand, "In a sense, the work on the Archives will never be finished." (Dvorak, 1969) Svoboda mentioned yearbooks, correspondence, photographs, and books. Specific collections included student records, such as those created by the Palladian Literary Society or the Kosmet Club, literary magazines such as the Kiote or the Prairie Schooner, the minutes and reports of the Board of Regents, and similar files from the early chancellors.

Svoboda explained: "Much work lies ahead, but with the cooperation of students, alumni, professors, staff and University departments, we hope to preserve the memory of our institution and those who lived it." (Dvorak, 1969)

Svoboda wrote in 1975 that the University Archives included over 2,000 cubic feet of administrative and faculty records, photographs, and the Mari Sandoz Collection. For some time the materials were stored in the basement of Love Library, adjacent to Svoboda's office on the fourth floor, and then in Love Library rooms 303 and 308.

One of Svoboda's more significant accomplishments included the early development of the Czech Heritage Collections. These collections include documents associated with Czech immigrants to Nebraska and those who experienced World War II and the Prague Spring of 1968 in Czechoslovakia. The University of Nebraska Foundation provided funding for Svoboda to create oral histories and he eventually recorded 65 interviews with Nebraskans of Czech descent.

Svoboda retired from the position in 1993.

Svoboda, born in Pelhrimov, Czechoslovakia, on March 31, 1930, was the son of Josef and Irena Horokova Svododa. He left for West Germany in 1948, when his home country came under Communist rule. In 1950, he emigrated to Canada. Svoboda became a United States citizen in 1969. He attended the University of Toronto and received a history degree in 1958. He received a master's degree from American University in 1963. He previously worked as an archivist at Case Institute of Technology, Cleveland, Ohio.