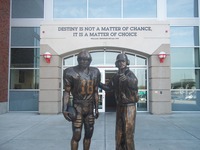 The statue of Brook Berringer and Tom Osborne is located outside of the Tom and Nancy Osborne Athletic Complex on the North side of Memorial Stadium.  It is a life-sized bronze sculpture of the two standing side by side, and Osborne appears to be coaching Berringer during a game.

It was sculpted by Nebraska native Fred Hoppe and put up in 2006 in association with the athletic complex (Huskers.com).

The statue is meant as more of a piece of art, or decoration, than as an actual monument.  However, the statue represents some of the qualities that are valued at the University of Nebraska, particularly in the Cornhusker’s football program (Huskers.com). Coach Osborne, when approached with the idea for a statue, did not want it to be of him alone (Huskers.com).

He also chose to have the player standing alongside him be Berringer instead of just making the player a nameless figure because, as Osborne himself said in an interview, “Brook's spirit epitomizes the sacrifices that so many small-town kids have made to make this program great. He was not a walk-on, but he symbolizes the efforts of so many of those kinds of players. His impact has been great … he made his mark here" (Huskers.com). 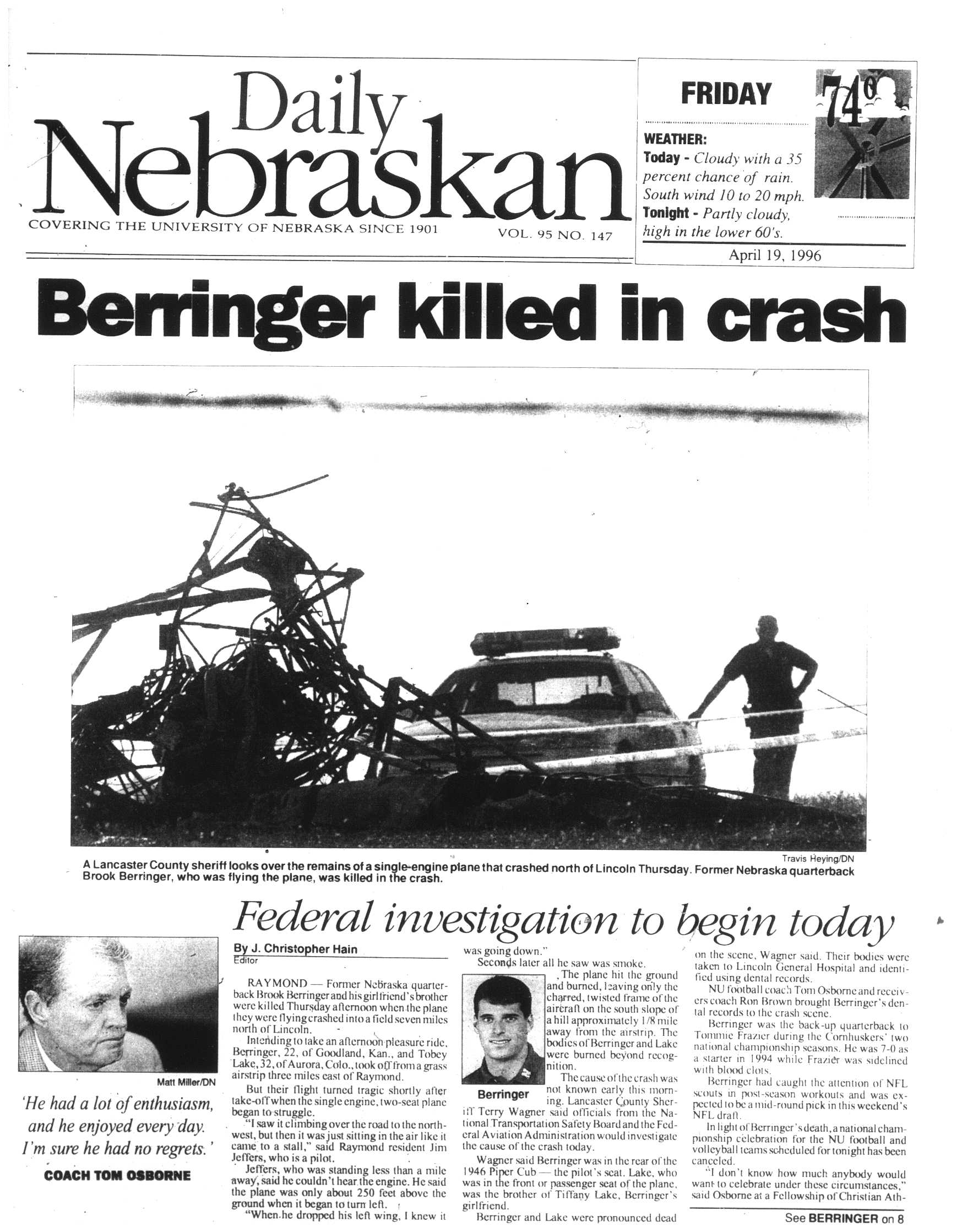 Brook Berringer was a quarterback on the University of Nebraska’s football team from the 1992/1993 season to 1995/1996 season (Waite).  Berringer was not the Cornhusker’s starting quarterback, Tommie Frazier had that position, instead he was the back-up (Waite).  However, his role became very important when Frazier was sidelined during the 1994 season with blood clots (Cluck).

One of his most memorable games was against Colorado in 1994. According to his coach Tom Osborne, “He played a perfect game that day” (Huskers.com). However, Berringer’s influence extended beyond one great game.  According to Ron Brown, “That kid had something inside that began to emerge into something really special” (Huskers.com).  He also said, “You could see the spirit in him, and it really culminated in that game" (Huskers.com). Overall, Berringer had a 7-0 record as a starter in 1994 and helped Nebraska prove that they could win with or without their first string quarterback playing (Waite, Parks).

Berringer was projected to be a mid-round draft pick in the 1996 draft, but unfortunately this was not to be (Cluck).  On April 18th, 1996, tragedy struck (Hain).  Brook Berringer and his friend Tobey Lake had been flying a 1946 Piper Cub airplane, but it crashed in a field outside of Raymond, Nebraska (Hain).  Berringer’s death immediately had a wide-reaching impact on the state of Nebraska as well as football as a whole (Peters).  A candlelight vigil was held for him outside of Memorial Stadium the weekend following his death, and a memorial service was held for him before the annual Red vs. White football game on April 20th(Peters). Berringer was buried in his hometown of Goodland, Kansas on April 22nd(Peters).

Berringer’s legacy, however, lives on.  Not only does a statue of him stand in front of the Tom and Nancy Osborne athletic complex, there is an honorary team at the University of Nebraska known as the Brook Berringer Citizenship Team (NU Media Relations).  This honor is presented to athletes on the Nebraska Football team who go above and beyond the call of duty through leadership and service (NU Media Relations). 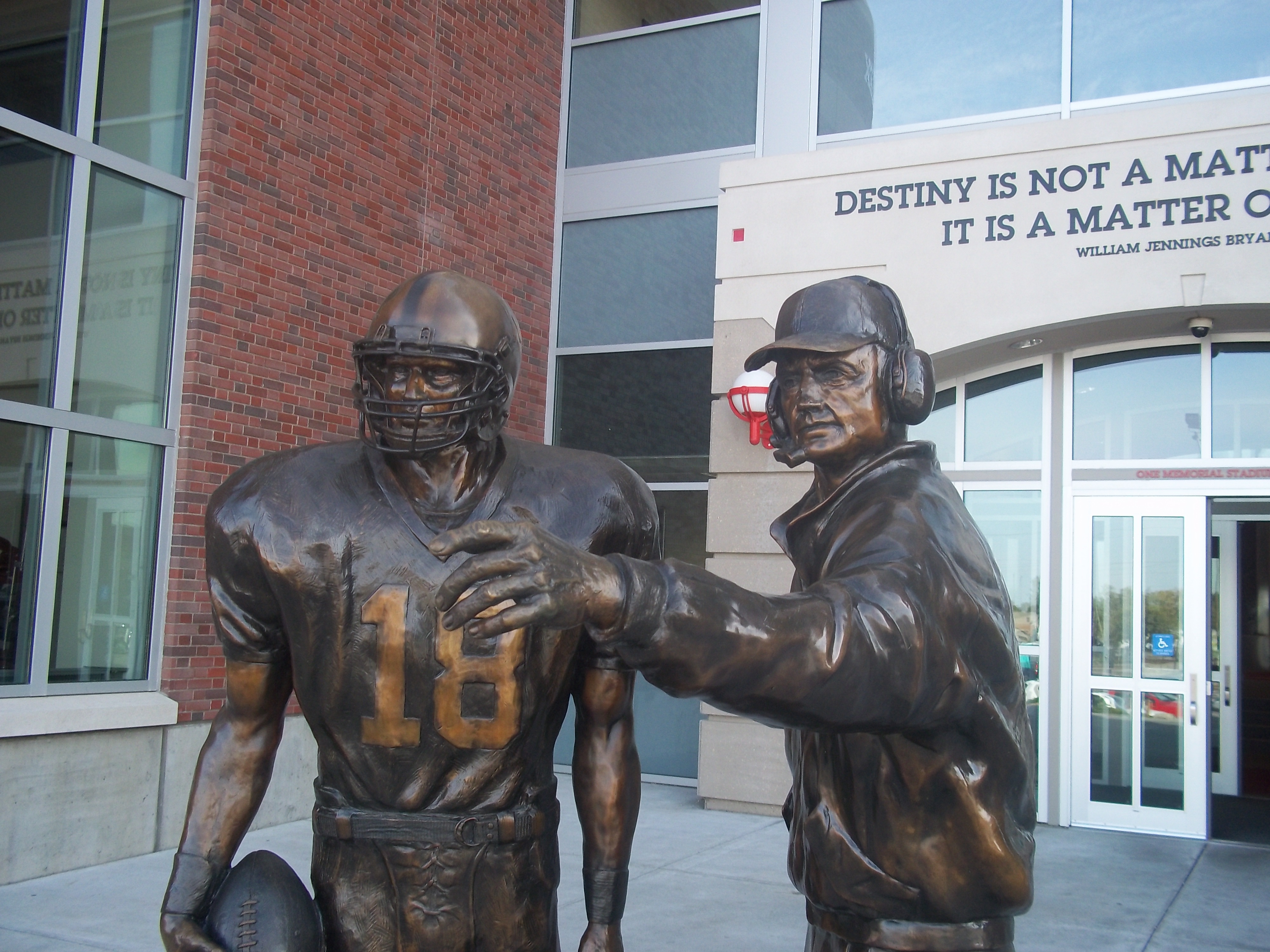 “That statue is out there because it is a rock solid thing that stands up through snow and rain and wind and sunshine. It’s a statue of character”- Ron Brown (Huskers.com)

Of the three qualities of University of Nebraska football that have been outlined, character is by far the most significant.  The statue of Tom Osborne and Brook Berringer symbolizes the value that the Cornhusker football team places on character.  Berringer was not just a good quarterback; his actions as a person and his character contribute to his legend (Waite, Parks).

Coaches and teammates alike have lauded Berringer’s character.  After Berringer's tragic death, Tom Osborne said, “The world lost a role model…if you had somebody you wanted your son to be like, Brook would be a great place to start” (Osborne). He later said, “There was nobody that I coached who had better character than Brook Berringer” (Osborne).

What Berringer stands for is as important today as it was back when he was still a player at Nebraska. In an interview, Osborne stated, “(Brook) embodied a lot of the things we are trying to get done here.  Good student, good person, unimpeachable character” (Cluck). Osborne also stated that it is for these reasons that Berringer was the player that was chosen to be standing next to him for the statue; Berringer represents all that the University of Nebraska's football program wishes for their players to be (Huskers.com).