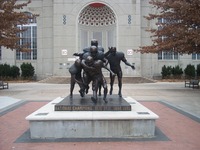 The Husker Legacy Statue, located on the east side of Memorial Stadium, was created in 1997 to honor the four national championships that the football team won in 1970, 1971, 1994, and 1995 (Huskers.com). The statue also speaks to the tradition that has permeated throughout the program since its earliest days.

Made of bronze and weighing two tons, the statue was placed on the plaza east of Gate 20 in September 1997 (Chapek). In 1995, the sculptor, Fred Hoppe, approached the director of facilities for the Athletic Department, John Ingram, about creating a monument that commemorated the Huskers' success but also represented the Huskers' teamwork and dedication (Chapek). After one year of research and construction, the statue was set in place on September 29, 1997 (Chapek).

The statue is dedicated to all the players who have played for Nebraska over the years (Chapek). Hoppe said the idea was to "commemorate the legacy of Nebraska as a whole, not just for one team or individual. He also mentioned that, "the monument displays the sense of pride that Nebraskans have for their football team" (Chapek).

The statue depicts six Husker defensive players tackling a player from Kansas State (Huskers.com). The sculpture was modeled after a picture taken by a photographer for the Athletic Department, Richard Vorges, during the Nebraska vs. Kansas State game on October 22, 1995 (Huskers.com). Hoppe said that he chose the photograph because it showed the team as a whole making a tackle. "I looked at every photo for the past two years and nothing was comparable to the teamwork and determination of the chosen photo...it represents the whole teamwork attitude of Nebraska football" (Chapek). 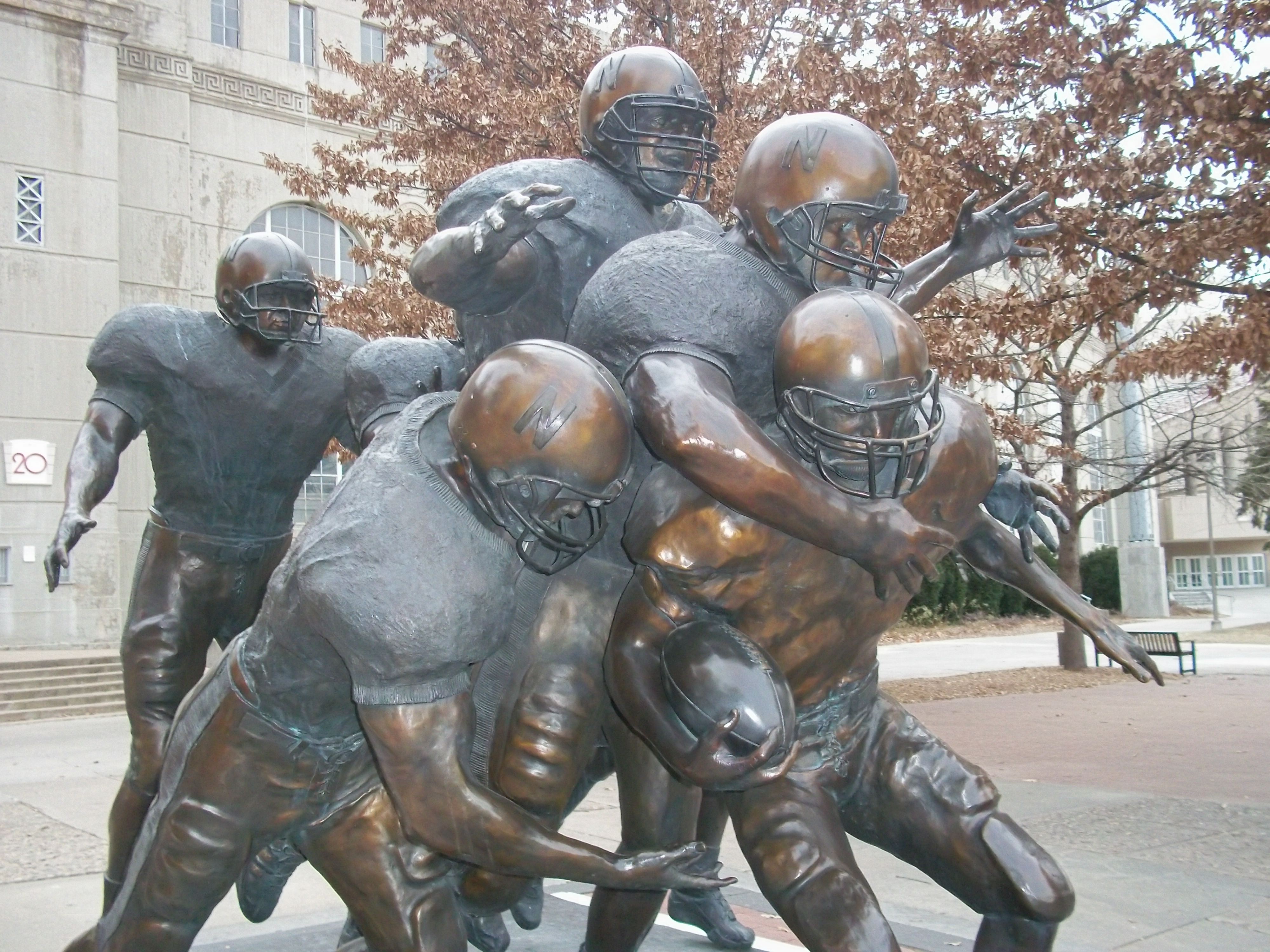 The Nebraska Cornhuskers have a long and storied history as a football program. The team began play in 1890 as the Old Gold Knights and have since grown into one of the most successful college football programs of all time (Huskers.com). The tradition of Husker football exists in many forms: through the consistency of winning, the undying fan support, the Tunnel Walk, and the the legacy of the Blackshirts.

The team has 808 all time victories, ranking fourth in NCAA history, and is the winningest program of the last forty years (Sherwood). The Huskers are one of two teams to win three national championships in four years and have been ranked in the final Associated Press poll 35 out of the last 39 years (Osborne). The team has had 92 All-Americans along with three Heisman trophy winners (Huskers.com). At home, the Huskers are 362-110-3 and Memorial Stadium is traditionally one of the toughest venues for opponents in the country (Huskers.com).

Husker fans have been labeled "the greatest fans in college football", as evidenced by the greeting above every entrance to Memorial Stadium (Sherwood). Nebraska owns an NCAA record streak of over 300 consecutive home sellouts dating back to 1962, attesting to fans' undying loyalty in good times and in bad (Huskers.com). Fans have been given the title of "The Sea of Red" due to hordes of fans that follow the team at home and on the road (Huskers.com). For example, in 2001, over 60,000 fans made the journey to Pasadena for the Rose Bowl game, vastly outnumbering fans of the opposing team from the University of Miami (Huskers.com).

One of the most well-known traditions in all of college football is the Tunnel Walk. At the beginning of each game, exciting highlights play on the video boards around the stadium as the Cornhuskers emerge from the North tunnel and sprint onto the field to The Alan Parsons Project song, "Sirius" and to the screaming of 85,000 fans (Smith). The experience hypes up the fans as well as the players and adds to the excitement of Husker home games.

The Nebraska defense has been known as "The Blackshirts" since coach Bob Devaney first clad the unit in black pullover practice jerseys in 1963 (Huskers.com). The nickname caught on like wildfire, and it has continued to strike fear into the hearts of opponents to this day due to the teams' reputations for having a staunch, physical defense. Under defensive coordinators like Monte Kiffin, Charlie McBride, and Craig Bohl, the Huskers have repeatedly finished in the top 10 in total defense over the years (Huskers.com).