The information is presented through a series of newspaper articles emerging from the time of conflict, as well as a narrative to help the reader interpret the (often opinionated) words of those who spoke in this intense and emotionally charged time period. 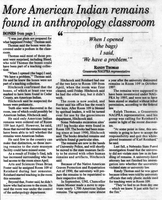 During and after the passage of the NAGPRA law, a series of events caused controversy over Native American remains to explode at UNL. Native American remains were first found in Room 109 of Bessey Hall in 1997, and these remains were supposed to have been inventoried under NAGPRA in 1995. They were not meant to be studied or kept with permission from tribal leaders. In September of 1998, then –UNL Chancellor James Moeser started the repatriation process for over 1,700 remains. But controversy soon erupted when more remains were found in the same room of Bessey Hall in February of 1999. Only two professors had access to Room 109 of Bessey Hall: Anthropology Department Chair Robert Hitchcock, and an associate anthropology professor named Karl Reinhard. Hitchcock claimed, however, that his key was broken and he could not access the room. 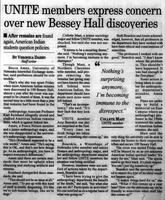 The following day, the Daily Nebraskan printed an article featuring the reactions of Native Americans in the University of Nebraska Intertribal Exchange (UNITE). In the article, a Ponca Nation member named Becca Amen was quoted as saying, "To put up with this kind of stuff is totally disgusting. It's like we're sub-human beings, like we're dogs." Other members of UNITE, however, understood that the remains might have been placed in Bessey 109 by mistake. Collette Mast, a Northern Cheyenne tribe member, understood that the people moving the bones might not have recognized them as being Native American remains. Although some Native Americans at the University were sympathetic to Reinhard's misfortune, many, like Becca Amen, were angry, and their words sparked controversy on campus.

A few days after the discovery of the remains in Bessey 109, the University Police launched an official investigation. The Daily Nebraskan released more Native American reactions which were generally negative and unsupportive of the situation. Chancellor Moeser released a statement on the University's compliance on NAGPRA saying, "Regardless of how and why these remains came to be in 109 Bessey, we are as committed now to the NAGPRA policies as we have been in the past." This commitment was not enough, however, as Tribal groups seeked official reconcilation for past damages.

A few months after the police investigation was launched, a 52-page report was released that released the University from charges of incompliance with NAGPRA laws. The report, however, did find evidence of unauthorized destructive testing on Ponca, Pawnee, and Arika remains before 1992. Meanwhile, Karl Reinhard was exonerated from chargres, and information was released saying that he had permission to study remains. However, a Tribal group still filed a complaint against Karl Reinhard, and Reinhard was also moved to sue his research assistant, Stan Parks, for defamatory remarks. Reinhard's lawyer predicted that if people continued to defame his name, he would have to resort to the courts. That prediction proved to be correct.

Karl Reinhard filed a claim against the University's College of Journalism and Mass Communications, claiming that a story published in the Journalist severely hurt Reinhard's reputation in his field of work and defamed his name. Reinhard also sued his research assistant for defamatory remarks. In addition, the University released a report stating that a large number of Native American remains were incinerated in an East Campus facility in the 1960's. The controversy in the 1990's along with the announcement of the incineration in the 1960's led to the creation of a plaque on East Campus which is described in the next section.