This section describes how the University officially commemorated and reconciled with Native tribes after the years of turmoil and controversy regarding mistreatment of Native remains.

It presents the Board of Regents' establishment of an area for a memorial on East Campus commemorating the events, as well as a picture and description of the plaque that was placed. It also presents dialogue to help the reader interpret the events.

After almost a decade of controversy regarding Native American remains at the University, it was time for official reconciliation. Chancellor Moeser first met with Tribal representatives to discuss the posibililty of placing a plaque on East Campus over the space in which Native remains were incinerated in the 1960's. This plaque, however, was meant to commemorate much more than the act of incineration. It was meant to reconcile the harm caused towards Native Americans by violations of NAGPRA law, especially in the late 1990's. On April 7, 2001, UNL's Board of Regents moved to establish a protected area for a Native American memorial on East Campus. The protected area for the memorial was approved by Chancellor Perlman. 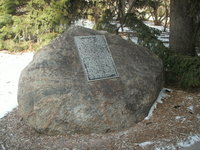 After many years of turmoil and controversy over Native remains at the University, the remains of Native Americans were finally honored and commemorated by the construction of a plaque on East Campus. The plaque reads:

This memorial honors an unknown number of Native Americans whose remains had been taken from their graves for inclusion in the University of Nebraska's archaeological collections. In the mid 1960's, those remains were incinerated in a facility located near this site, in a manner totally inconsistent with the beliefs and practices of the tribes of the Great Plains. In 1998, UNL Chancellor James Moeser and tribal representatives agreed to set aside this site as a memorial to honor these Native Americans, and to remind future generations of this cultural injustice. Memory of these events must be more than symbolic, for people who forget the past are bound to repeat its mistakes. May we learn from this and treat all persons with honor and respect.