Two pages from the 1911 Cornhusker on the Komensky club.

Pages from the Cornhusker

The Komensky Club was organized November, 1903, by a number of Czech (Bohemian) students attending the University of Nebraska. The purpose of the club was to become better acquainted with the language and literature of Bohemia and to interest other Bohemians over the state in the pursuit of University study. Very appropriately the name of Bohemia’s famous educator, John Amos Komensky (Comenius) was chosen to designate the association.
At its meetings held semi-monthly, the club enjoys literary and musical programs. During the season of 1910-1911, a number of profitable gatherings have been held at some of which well-known lecturers and musicians have appeared. At two of the meetings the ten Bohemian members of the State Legislature were guests of honor. The club united its appreciation of the distinctions which have come this year to certain members; notably Thomas Konop, a charter member, who was elected to the national United States Congress from Wisconsin: Otto Kotouc, another charter member, who is doing loyal service to his state in Nebraska’s legislature: Sylvester V. Shonka, unanimously elected captain of Nebraska’s football team; Joseph T. Votava, member of debating team winning from Wisconsin, elected without a dissenting vote to be Ivy Day orator.

The club has taken an active interest in University affairs in general and has contributed its share to all undertakings making for a greater University.
In the summer of 1910 the club was represented by a delegation at the special services held in Cedar Rapids, Iowa, at the unveiling of the beautiful memorial to Prof. Jeffery D. Hrbek, the first instructor in Bohemian at the University of Nebraska. The club’s representatives also took an active and prominent part in the convention of the associated Komensky Clubs held in Iowa City, Iowa, in June. Two important executive offices are held by members of the local club. The Komensky Magazine, the first and only Bohemian publication issued from Lincoln, is devoted to the cause of education among the young people of Bohemian parentage in the United States. 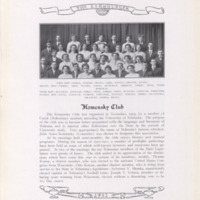 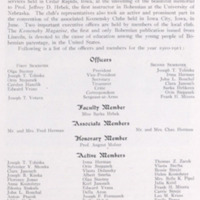