A photograph of the 1910 Komensky club, a list of members and officers in the club. A brief description of the club history and event of the year.

Pages from the 1910 Cornhusker

The Komensky Club was organized in November 1903, by a number of Czech (Bohemian) students attending the University of Nebraska. The aim of the club was to become better acquainted with the language and literature of Bohemia and to interest other Bohemians over the state in the pursuit of university study. The name of John Amos Komensky (Comenius) was the fitting name chosen for this educational association. The Club meets twice a month, and holds programs of a literary and musical nature. Occasionally speakers from other places are secured to give addresses before the Club. Professor Shimek, of the State University of Iowa, and Mr. Karel Pelant, editor of a paper in Prague, Bohemia, have addressed the Bohemian students and citizens of Lincoln in the Czech tongue. During the past year the Komensky Club has given a number of public programs, the most noteworthy of which were a concert of Bohemian music arranged by Prof. August Molzer, and an English program about Bohemia in which something of the country’s history, great men, traditions, etc. was discussed, together with a presentation of Czech music (instrumental and vocal), and of the Slavonic folk-dances, given by members of the Club in the beautiful national costumes of the peasants of that country.
The activities of the Nebraska University Komensky Club aroused so much interest among the young Bohemians in the other states and localities that clubs similar to the one founded here were established among Czech students at the state universities of Iowa, Minnesota, Illinois, and Texas, and also in Cedar Rapids, Iowa: South Omaha, Humboldt, Table Rock, Crete, Milligan, Nebraska; Chicago Illinois etc. In January, 1908, these clubs in a convention, held in Cedar Rapids Iowa, united in a federation which strengthened the movement for higher education among the young people of Bohemian. At the convention the first steps were taken toward establishing a memorial to Prof, Jeffery D. Hrbek, the first instructor in Bohemian at the State University of Nebraska, who died in Lincoln, December 4, 1907. This beautiful memorial will soon be erected over his resting place in the Bohemian national cemetery of Cedar Rapids, Iowa. The growth of the Komensky Clubs soon demanded the establishment of an official magazine, and in January, 1909, the Komensky, a monthly literary journal, published in the Bohemian language, was founded. The members of the various Komensky Clubs, as well as writers of wide note, contribute to its columns. The Komensky is issued from the University of Nebraska, and is the first Bohemian magazine sent out from Lincoln. 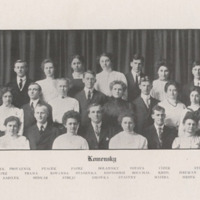 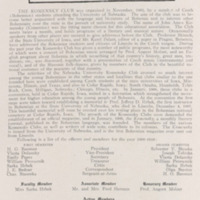