Persons residing in Assembly Centers may not be released from an evacuee status to travel within the area under command of the Western Defense Command, Alvin Laughlin, Welfare Section head, announced.

"Evacuees, however, can travel beyond the limits of the Western Defense Command, but they must have the approval of state authorities or local representative of state authorities in the community to which they want to go," Laughlin added. "They also must have documentary evidences from responsible employers that they will be gainfully employed upon their arrival."

All requests are handled by Laughlin and his assistant, James Ito. 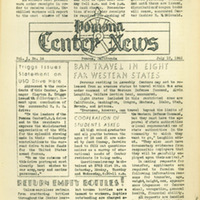