WASHINGTON, D.C. - Additional testimony to the heroism of the 100th infantry battalion composed of American doughboys of Japanese descent from Hawaii, came today in the announcement of awards of the Distinguished Service Cross to seven members of the famous infantry unit, one award being posthumous.

Other awards, including many Silver Star, Bronze Star Medals and Purple Hearts, have been won by members of this unit. It is the "most decorated" single unit in the U.S. army.

All seven of the awards were won in the Italian campaign. The 100th infantry battalion now is in action in France and Germany.

The doughboy who died winning his Distinguished Service Cross was Pfc. Kiichi Kosa of Waipahu, Oahu. On July 9, 1944, near Castellina, Italy, he and four comrades charged with fixed bayonets into a wooded area, firing from the hip as they attacked and routed a group of Germans.

Later, when the enemy opened fire from a small castle, Private Koda circled the structure and tossed hand grenades into each window, then charged it with his squad. He was killed by a German hand grenade, but his actions resulted in a death of ten Germans, the capture of three and the seizure of five enemy machine guns and four machine pistols.

Staff Sgt. Yukio Yokota, Pfc. Haruto Kuroda, and Pvt. Thomas Y. Ono, all of Honolulu, function as a team, and each was cited for extraordinary heroism in action.

On June 2, 1944, the three crawled through a wheat field to within ten yards of an enemy machine gun and killed three Germans with grenades. Under intense fire they crawled to a second position, eliminating it also. They then joined their platoon in a successful assault on its assigned objective. A short time later they repeated their tactics against another German machine gun nest. In the space of three hours, the three of them had neutralized five enemy machine guns, five machine pistols and killed or captured 17 Germans.

Pfc. Kaoru Moto, of Spreckelsville, Maui, distinguished himself on July 7, 1944, by creeping to a German machine gun position and killing the gunner, then capturing the assistant gunner when the latter opened fire on him. While guarding his prisoner, he noted (continue to Page Six)

(continued from page 1) an enemy machine gun section moving up and forced it to withdraw by his deadly fire. Wounded by a sniper, he held his position until relieved. Then, while going to the aid station for medical attention, he wounded two more Germans in a machine gun nest and forced the third to surrender to him.

Pfc. Robert H Yasutake, of Iahaina, Maui on June 2, 1944, was an automatic rifleman during an attack. He first neutralized an enemy machine gun position, then wounded seven Germans with his rifle and grenades in another position, fought a duel with Germans in a dugout, and finally killed three enemies who were attempting to isolate him from his buddies.

Pvt. Jesse M. Hirato, of Honaunau, on June 5, 1944, crawled toward an enemy sniper only to discover that his rifle had jammed. He picked up a German shovel nearby and charged the German position with this weapon. Three Germans, equipped with a machine pistol, two rifles and grenades, surrendered to him. 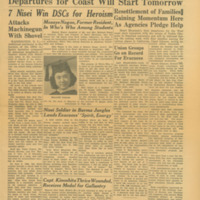