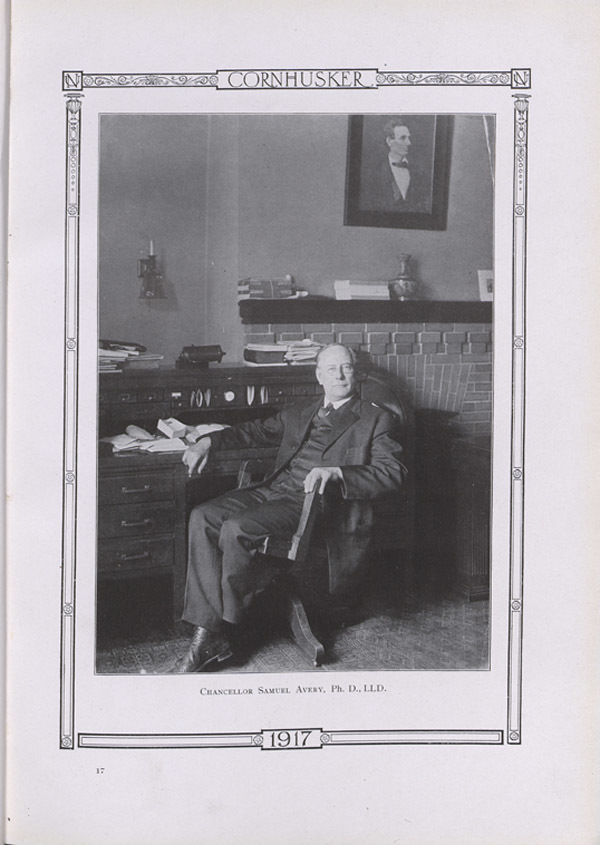 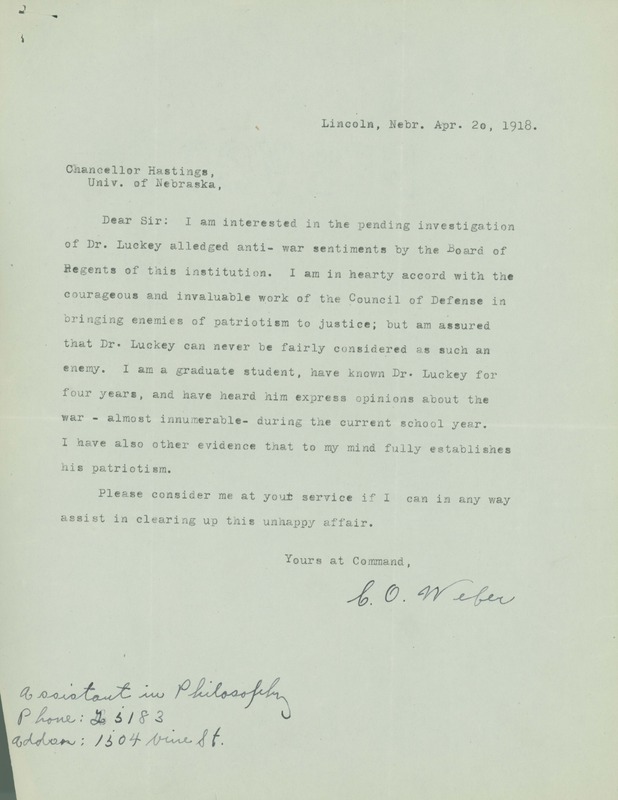 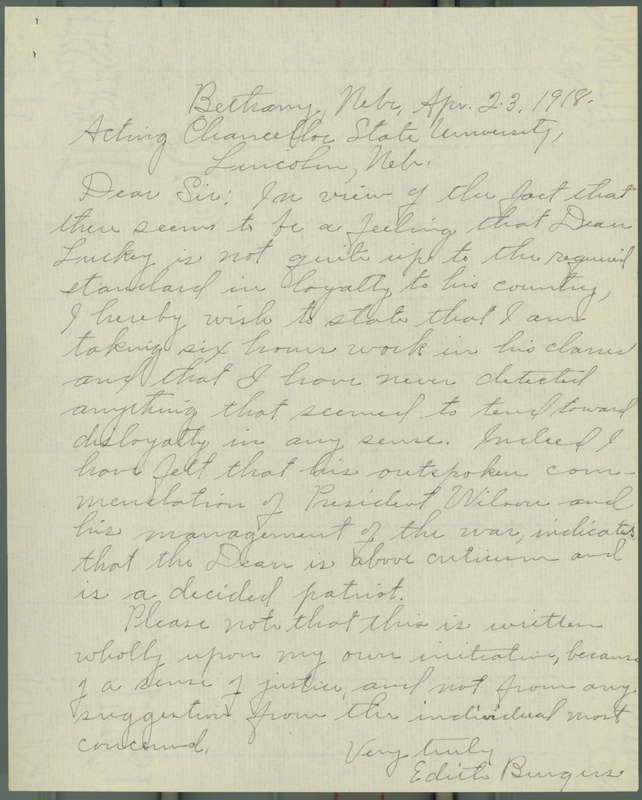 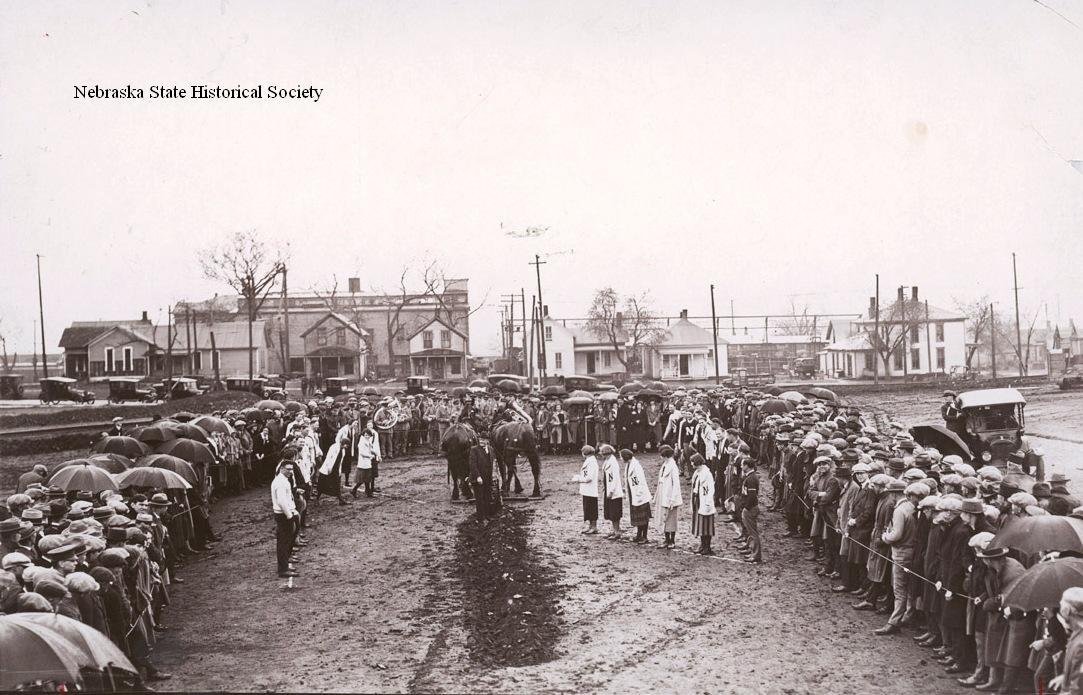 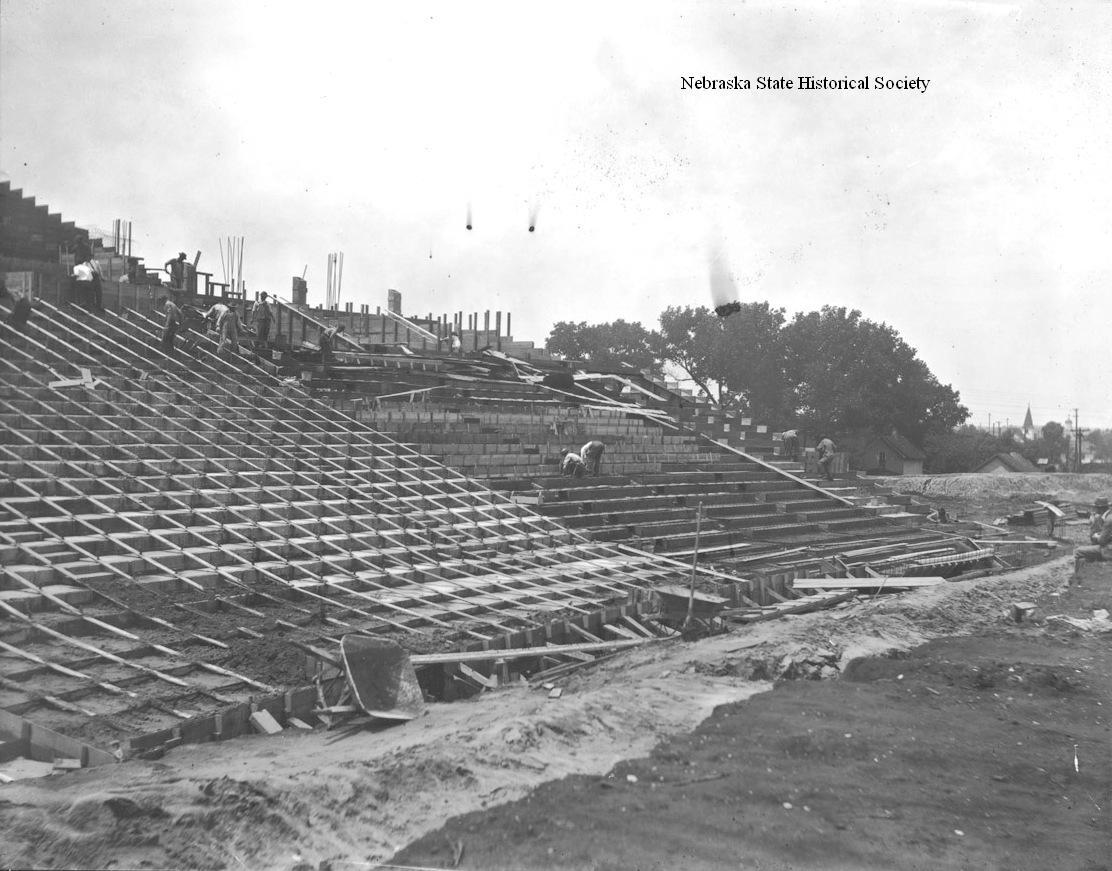 Construction of Memorial Stadium during the summer of 1923. Image provided with permission by the Nebraska State Historical Society.

On April 6, 1917, the United States formally entered World War I.  The First World War had an enormous impact on US politics, culture, and society.  More women were entering college and fighting for the right to vote, while other groups of American citizens were subject to oppression.  The declaration of war and the scare of Germanism spread across the country like wild fire. Patriotism changed.  Suddenly, anything German was questioned and considered undermining patriotism.  New organizations, such as the Nebraska State Council of Defense were created to enforce state loyalty.  They targeted churches and schools to eliminate the use of the German language. [1] Quickly, the shock and reality of World War I found its way to Lincoln, Nebraska, which caused many changes that affected the University, its faculty, and its students leading them through dark times in hope for a better future.

During the 1910s, under Chancellor Samuel Avery, the University of Nebraska was experiencing a growing student population.  Enrollment grew from 3,992 to 5,405 students.[2] Then came World War I, and the student population decreased rapidly.  More than a thousand young men withdrew from the University to join the war effort. Many went overseas and fought, doing everything from flying planes to entering trenches.[3]  Those who left fought for the government and those who remained did their best to support them.

On April 24, 1917, a Patriotic Convocation took place at the university which was comprised of a parade and an All-University Patriotic Mass. The parade consisted of four-thousand students, ROTC members, and facutly.  At the Patriotic Convocation, which was held at the auditorium, cadets, faculty members, the chancellor, and the governor all spoke to inspire patriotism and join the university in support of the government.[5]  Following the convocation, numerous campaigns were organized to support the soldiers and promote America’s involvement.

One of the organizations created was the Four-Minute Men by the Committee on Public Information.  This was a group of volunteers authorized by President Wilson to give four-minute speeches on topics that dealt with the American war efforts to raise money for the war through Liberty Loan drives and War Saving campaigns.  The speeches were four minutes in order to be presented at town meetings, restaurants, in between movie reels, etc.  The Nebraska branch, headed by university Professor M.M. Fogg became the most efficient branch in the nation.[6]

Another faculty driven campaign was initiated by Professor J.E. Le Rossignol.  His objective was to bring the faculty and the students together to raise money for patriotic efforts.  This campaign was very successful, during the second Liberty Loan drive, between the faculty and the student a total of $73,000 was raised.[7]  Today, this would equate to $1,439,691.17.

The Daily Nebraskan was one of the loudest and most supportive organizations on campus during World War I.  This was the student led newspaper that supported the war effort loudly through rallies and publication. One of the articles published stated, anyone not participating in a university war rally was a “dirty yellow coward.”  After one of the rallies, Chancellor Avery said, in a speech at the city auditorium, that the university was ready to do whatever was necessary to facilitate the war effort.[8]

The University of Nebraska took additional measures to support their students and the war efforts.  On April 14, 1917, the Board of Regents offered full credit to any student with good grades who enlisted before the end of the school year with seniors granted graduation degrees in June 1917.  Because so many male students left the university to join the service, this created an opportunity for women to enroll at the university to obtain a higher education.[9] Another change that impacted women and the university was the request by the Signal Corps of the United States Army to build a radio telegraphy school to assist in the war efforts.  According to the archive of records, 93 men received instruction and 132 men were transferred to active services in the army.  In addition, a class of 13 women students received instruction in Morse Telegraphy Preparatory in order to fill positions that had been vacated by men who joined government services.[10]  The University not only supported the war effort by assisting their students who joined the military, they also supported any employee that wanted to enlist as well.  Regent Hall proposed a resolution to pay employees’ salaries through the end of the year and hold their positions until they returned.  Under this offer, 30 faculty men enrolled in the military service.[11]

Due to the drastic changes happening at the University and in the state, the great war generated uncertainties among students and faculty.  Rumblings of Germanism ran rampant though campus.  Many faculty members relied on Chancellor Avery to guide them through these trying times.  However, his guidance did not last long.  Chancellor Avery was asked to join the U.S. Army’s Chemical Warfare Service because of his knowledge in chemistry.  During his temporary absence, the University appointed William G. Hastings as Acting Chancellor. [12]  Soon after Chancellor Hastings was assumed the position, anti-German hysteria spread.

One of the University professors, C.E. Persinger along with several other faculty members refused to sign a resolution saying “pacifism is untimely and dangerous” supporting President Woodrow Wilson.  Instead, the instructors urged everyone to find a solution without resorting to war. [13] According to the University archives and special collections, Persinger did not hide his opinions that the U.S. should not be involved in WWI he showed his patriotism through purchasing many war bonds and doing things to help the forces overseas.[14]

Another University of Nebraska Professor, G.W.A. Luckey presented a talk to his discussion club in May 1918 saying, “It is not my war,” which was characterized by some as being pro-German. Professor Luckey, spoke out against the war as well as the President’s policies.  An unnamed university student followed this with a letter to the editor saying, “There are approximately 200,000 German spies in America and do not allow yourselves to believe Lincoln is immune.”[15]

One of the student letters received in support of Professor Luckey came from C.O. Weber.  He wrote to acting chancellor Hastings stating that he was a graduate student and had known Professor Luckey for four years.  During this time, he had never heard the Professor express opinions about the war – almost innumerable – during the current school year.  He also indicated that he had other evidence to establish his patriotism. [16]

Another letter of support came from Edith Burgins.  She said that she took six hours of Professor Luckey’s classes and during this time she never detected anything that seemed to tend toward disloyalty in any sense. “Indeed, I have felt that his outspoken commendation of

President Wilson and his management of the war, indicates that the Dean is above criticism and is a decided patriot.” [18]

The disloyalty trials lasted ten days, drawing attention of newspapers. With Chancellor Avery in Washington, D. C. working in the Chemical Warfare Corps., there was no one to calm the fears and emotions that ran high before and during the hearings.  Even without Avery's support, the faculty members on trial still had the upper hand in the hearings. There was little evidence against any of them, and the Board of Regents was forced to exonerate all of them on the charges of disloyalty because "not a student was found who had received an impression of any such disloyalty. [20]

Professor Persinger of the History Department and Professor G.W.A. Luckey of the Education Department were put on trial with other professors, who came from different academic disciplines. Professor Persinger and Luckey were considered differently from the rest of those accused as they chose to talk to the press.  The Board determined that these two professors tarnished the university’s reputation through public criticism, and therefore were asked to resign.[21]

As indicated above, the shock and reality of World War I had an enormous impact on US politics, culture, and society.  This impact was heavily felt at the University of Nebraska during 1917 and 1918. The university’s enrollment diminished because of the draft, the war generated uncertainties among students and faculty, and many faculty members were placed on trial for disloyalty.  When the war finally ended, the sense of pride increased among its students and faculty.

November 11, 2018 marked a century since the First World War ended, but evidence of the war remains at the university.  To commemorate all the Nebraska men and women who served in World War I, the University of Nebraska dedicated Memorial Stadium to honor the Nebraskans who served and the 751 Nebraskans who lost their lives during the Great War. Interestingly, the Memorial Stadium was going to be named after Roscoe B. Rhodes who was the captain of the Huskers during the 1918 school year before being drafted, Rhodes was sadly killed in action on October 25, 1918 while serving in France. [22] This offer was declined by his family because they wanted the new stadium to not only honor Rhodes, but all Nebraskans who lost their lives in the war. The community raised up $430,000 in 1922 to help with the funding for the construction of the stadium. The money equals to about $6,472,651 in 2018 due to inflation.

Another reminder of World War I is Avery Hall.  Because of Chancellor Samuel Avery's passion for his country, university, faculty and students, Avery Laboratory was dedicated in his honor in 1916.  The building now houses the Mathematics Department, Mathematics Computer and Education, and a branch of the Statistics Department.  However, when it was all said and done, those who remained bolstered the university and left a solid foundation for new generations to come.