Vietnam War Protests at the Disapproval of the Nebraska Legislature 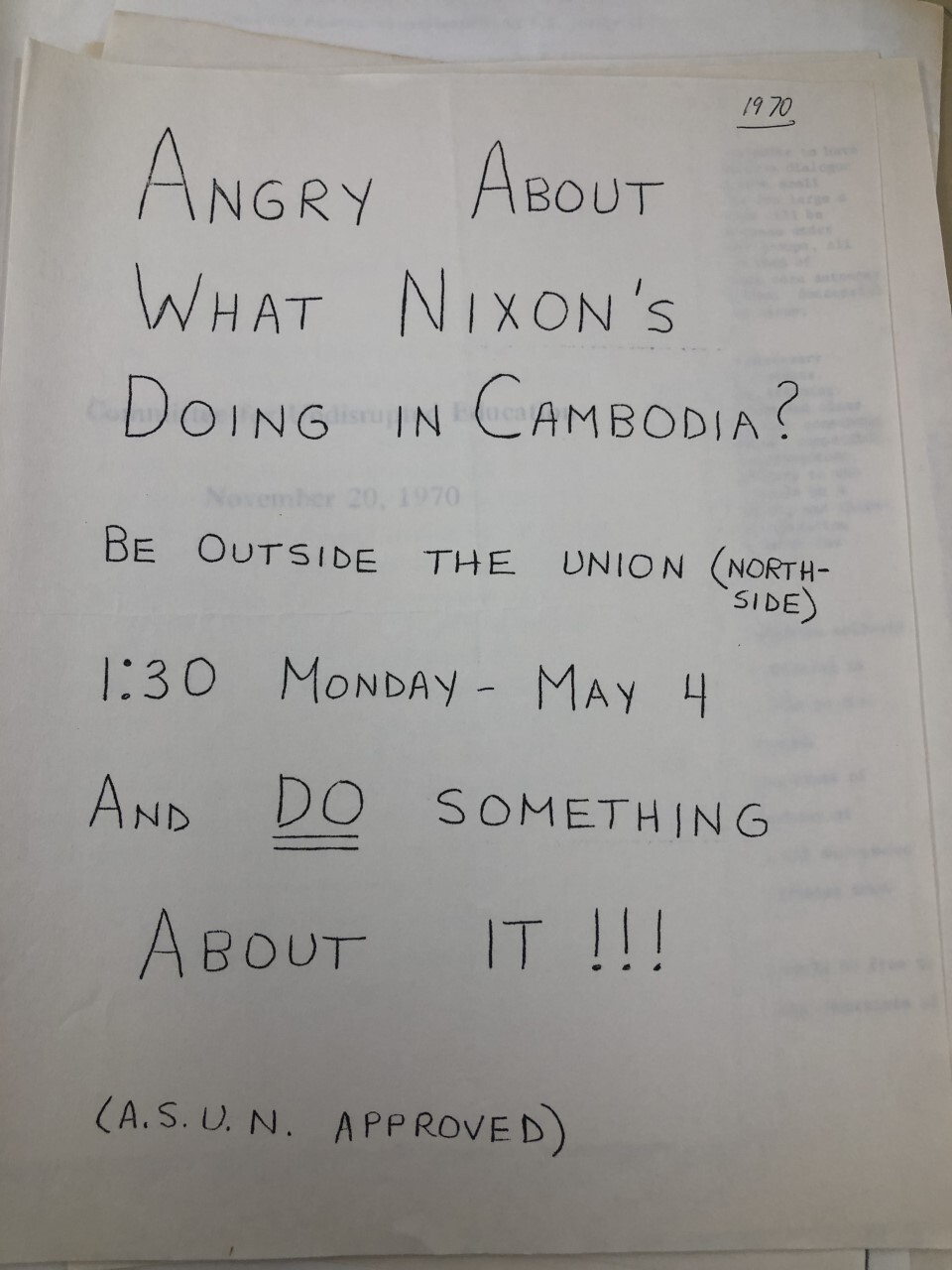 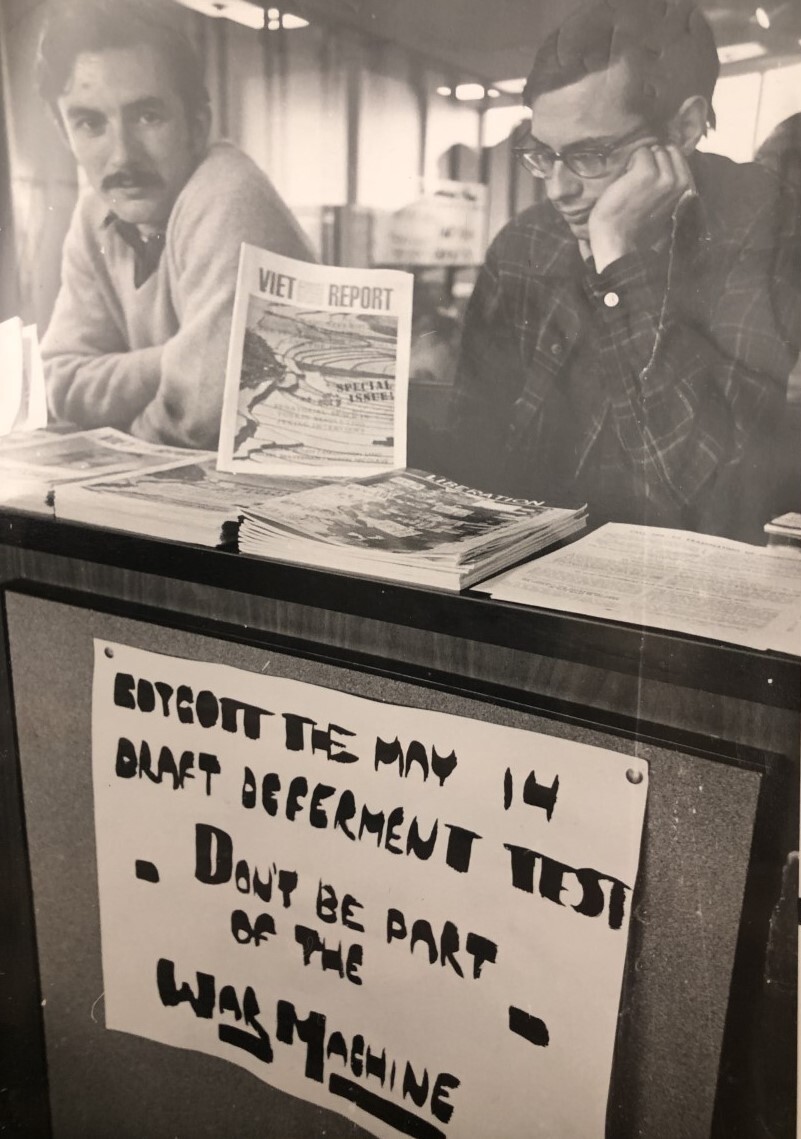 The Vietnam War era created a highly contentious time in the United States, particularly among college students. Students became increasingly vocal in their growing distaste for the seemingly never-ending war. The grievances with the war came to head in late 1969, when the United States instituted a draft. Students now faced the reality of serving in a war that they did not agree with, and certainly did not want to participate in. As a result, the University of Nebraska-Lincoln campus became a growing hub of protest and an advocate for peace and political freedom. While these students could protest relatively freely, a frustration with student rebellion began to grow in the Nebraska State Legislature. Since the University existed as a publicly funded institution, many Senators questioned if taxpayer dollars should be going somewhere where students were seemingly in control. What resulted was a bitter battle between the University of Nebraska- Lincoln and the Legislature. Students had a right to free speech, but would the Legislature allow it on the taxpayer dime? While the Legislature could not directly stop student protests, it could rescind its strings-attached funding. The Vietnam era highlighted that while student demonstration and protest allowed for students’ voices to be heard like never before, the Legislature’s oversight dampened their effects. Despite the Legislature’s disapproval however, the power of protest was found, and students would not be quieted easily.

Protests during the Vietnam era were not a phenomenon that occurred solely at the University, but the resiliency of UNL students was unique in that it showed their unfaltering resolve. Prior to the draft, students already had begun to protest the war. Campaigns ensued for the “New NU,” a university in which students could learn freely, and discuss topics that were pertinent to the time around them. It is no surprise that the idea of a “New NU” lent itself handily to the ensuing protests of the Vietnam War and the draft. The atmosphere of discontent with the war peaked at the takeover of the Military and Naval Sciences building on May 4, 1970. Following the occupation, students also took part in a strike in which many students did not attend class in order to further show their frustrations and disapproval of the war. The attention that had been focused on the University on the part of the Legislature also peaked at this time, and the Legislature worked to remind the University that it was somewhat at the monetary mercy of the Legislature’s budget. State Senator C.W. Holmquist expressed both his and his constituents concerns with the strike, saying that, “The University needs both money and students to operate."[1] He further noted that he had received several letters from constituents complaining of the strike. Holmquist’s comments suggested that while he had support for the University, he and those he represented would not stand for continued protest.

Prior to the occupation of the Military and Naval Sciences building, staff had also joined in on the discussion of the Vietnam War and the protests by students. Most notably, Charles Marxer, a visiting professor had sympathized with students’ grievances. Marxer led a class on US policy in Vietnam beginning in the 1967 school year.[2] Marxer himself was staunchly opposed to the war, and would help to organize student resistance. He founded the Draft Resistance Union[3] in which he encouraged students to burn their draft cards, and instead take on “pledge cards” to resist the war and the draft. In a memo seeking volunteers for the Nebraska Draft Resistance Union (NDRU), the purpose of the group was described as, “to build well-organized resistance to the war and to the draft system that serves it. We intend to do this by educating young people about the unjust and illegal nature of the war, the misdirection of our country’s foreign policy, and the coercive, anti-democratic character of the draft.'[4] Marxer’s actions gained attention from the Legislature, with many members calling for his firing. While the Regents initially resisted firing Marxer, he was dismissed from UNL at the end of the 1967-1968 school year.[5] Though Marxer was gone from the University, his anti-war sentiment still remained within the student body. Following Marxer’s leaving of the University, the Draft Resistance Union continued without him, though not nearly as organized as before. John Dietz, a member of the NDRU noted that after Marxer’s departure noted that while the initial anti-war fervor of the organization had worn off, there was still interest in the cause.[6] While the NDRU lost its leader, the disapproval of the war most certainly still ran rampant throughout campus as evidenced by the continued protests of the war.

Where the Nebraska Draft Resistance Union helped to highlight some of the earliest dissatisfactions with the war, the takeover of the Military and Naval Sciences building on the University’s campus brought widespread attention to the grievances with the war. Despite previous marches and walkouts, many protests were unable to sufficiently organize themselves to gain widespread attention. The shooting of students at Kent State however changed the trajectory of student-led protest. University of Nebraska-Lincoln students sought to showcase the injustice of the students’ murders as well as their disapproval of President Nixon’s campaign in Cambodia. What began as a protest became a student-led occupation of the Military and Naval Sciences building. From 8:30 P.M. on May 4, 1970 to 10:30 A.M. May 5, 1970 student protesters stayed in the building in a non-violent fashion, discussing their grievances with the war.[7] Despite the nonviolent nature of the protests, the University and President Joseph Soshnik began to worry that the protest would eventually turn violent, and the students were asked to leave. The initial allowance of the students’ occupation served to highlight the University’s willingness to let students express their grievances, however, it was quick to stifle the protest once it began to gain more widespread attention.

Batchelder most certainly held a much more strict view in how the University should respond to student misconduct. While many other Senators were not pleased with the student protests and the occupation of the Military and Naval Science building, many praised the University’s actions in putting down the protest and taking disciplinary actions to students who continued to protest. Where Batchelder felt as though funding should be used as a tool to force the University in being complicit with its wishes, not all Senators held the same sentiment. State Senator Luedtke noted that budget cuts would hurt students who had helped prevent the strike from escalating.[12] Despite not all Senators sharing the same extreme sentiments of Batchelder, the University clearly felt the pressure of Batchelder’s and alike Senators’ threats. The University still sought to act in compliance with the wishes of the Legislature, as exemplified by its resistance to many of the students’ wishes for a “New NU.”

While Batchelder was not entirely successful in his vision of a highly supervised University, Batchelder and the Legislature’s disapproval of student radicalism was highlighted following the Regent’s refusal to hire Michael Davis, a graduate student and philosophy lecturer to the University. While a student at the University of Michigan, Davis participated in several political protests, including a sit-in similar to that of the occupation of the Military and Naval Science building. When questioned in their reasoning for not hiring Davis, the Regents’ offered that Davis was, “intellectually arrogant and lacking in tact, objectivity and judgment."[13] The refusal to hire Davis brought about a great deal of frustration to the UNL student body, as many felt as if the University only did so to limit student activism. While the Regents maintained their reasoning solely lay in Davis’ on actions, there is ample reason to believe that the Regents feared the Legislature’s backlash. Davis commented on his not being hired noting that, “Could it be, that all of the talk of character is irrelevant? That the real issue is one of politics?"[14] While the Regents refused to comment much on the refusal to hire Davis, the desire to keep radicalism from further prospering on campus most certainly played a role in their unwillingness to move forward with his Davis’ hiring.

Though there were many outspoken Senators on student radicalism and protest on the University of Nebraska-Lincoln’s campus, they ultimately never followed through on their threats to decrease University funding. The University’s resistance to protest however, showed that the threats were taken seriously, making the University much more aware and weary of possible sources of radicalism. Yet despite the University and Legislature’s efforts to dampen students’ voices, the message of disapproval for the Vietnam War rang clear throughout campus, and most certainly highlighted the weight voices of dissent can hold.

Vietnam War Protests at the Disapproval of the Nebraska Legislature