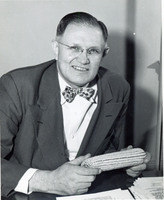 Boucher resigned in 1946, and Ruben Gustavson took his place as chancellor. With the influx of older students generated by the G.I. Bill, Gustavson had his hands full in a half-decade marked by pranks, drinking, riots, and discontent on campus. Older students, who were allowed the chance to attend college after serving in the military felt above the rules and largely ignored them. Panty raids and bonfires occurred, as well as a full-out riot over lack of parking. Widespread irritation occurred over the cramped, crowded city campus with stuffed freshmen dormitories. While students let out their frustration in wild hijinks, letters from concerned parents flooded in. Gustavson chose to regard the pranks as tomfoolery, and the students got a slap on the wrist, which of course only served to make him more popular, in spite of his intense disapproval of the football cult that developed on the university's campus. He instead focused on expanding the university’s research to counter the community’s attacks on UNL’s reputation. This played directly into the reason the university was founded under the Morril Act: as a place of research and practical learning.  His renewed interest in improving agriculture for the state was applauded, as Nebraska was, and still is, an agricultural state. He was beloved by the student population, who referred to him affectionately as “Gus,” for his gentle but firm rule, and while parents had mixed opinions, the advances that the university’s college of agriculture made under his direction smoothed over any conflicts. UNL, for the first time, began to appear on the national stage as a research institution.
← C.S. Boucher: The Isolationist Intellectual
Community →
Administration
Ruben Gustavson: The Humble Researcher