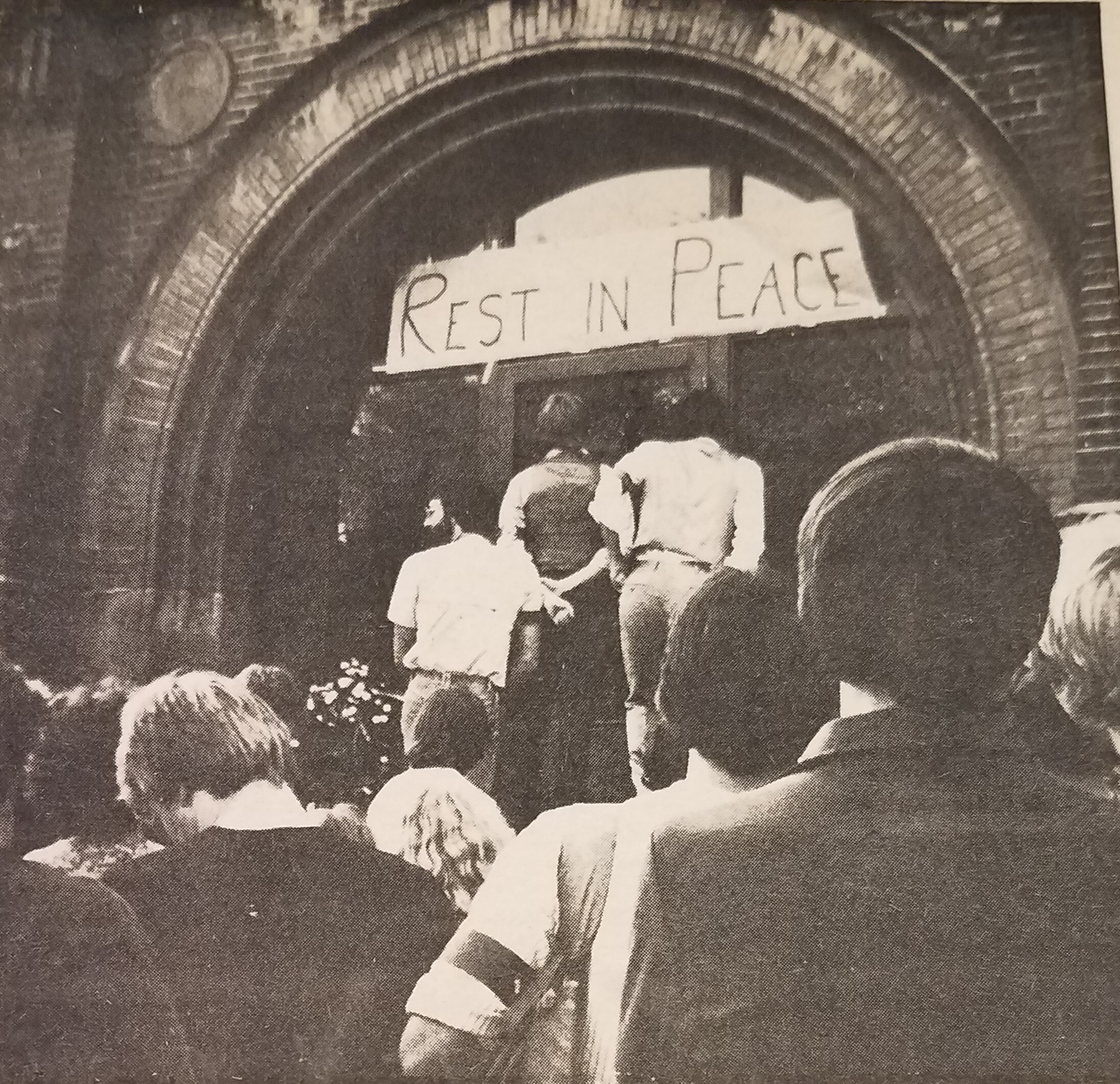 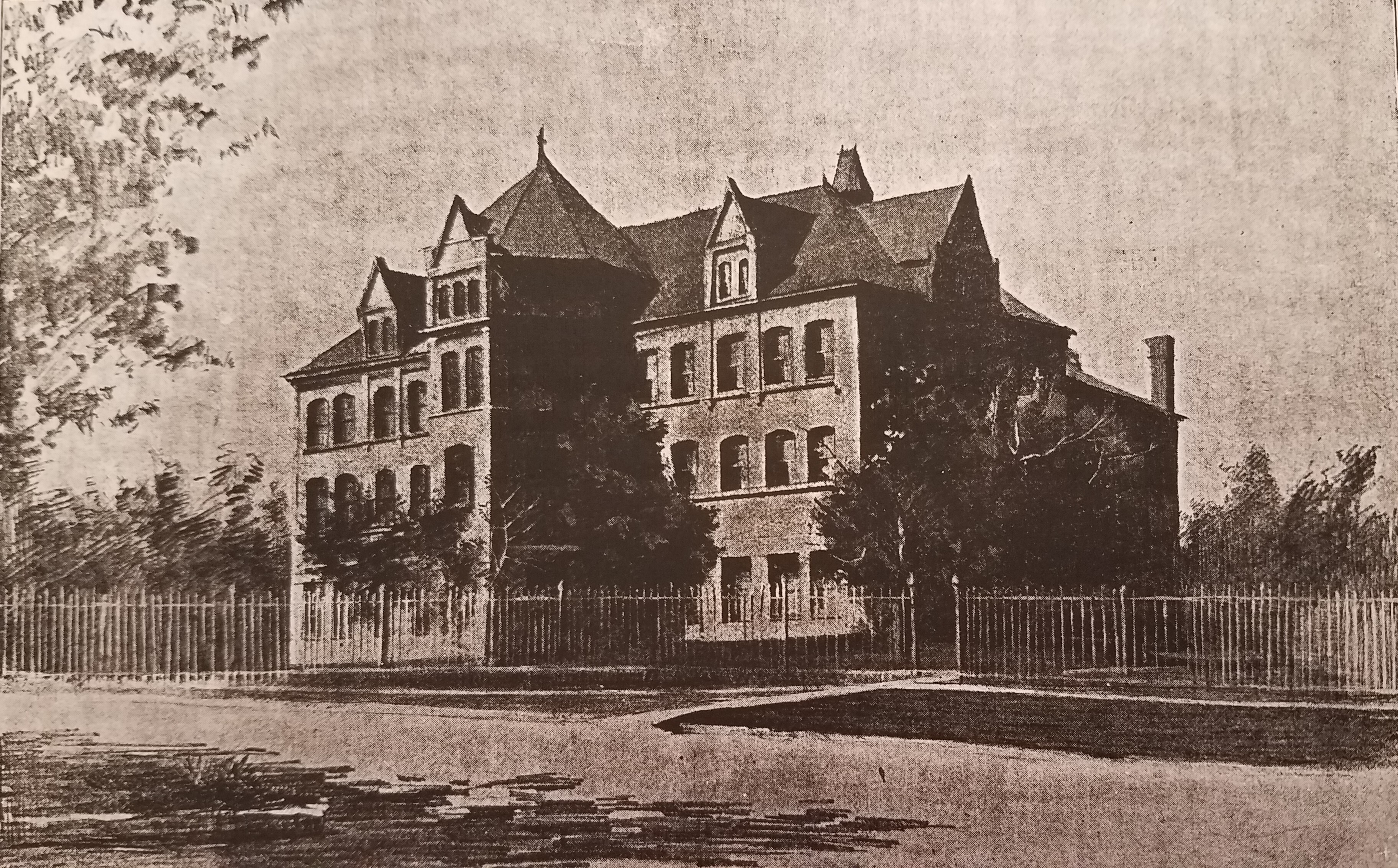 Originally built in the 1890s, Architecture Hall has been an object of wonder for generations of students at the University of Nebraska-Lincoln. Today, the building remains the oldest building on campus which is still in use. Over the years, Architecture Hall has served as the University’s first library, the home of the College of Law, and now as the headquarters for the College of Architecture. Due to this storied history, generations of Huskers have an attachment to Architecture Hall, perhaps no more than the architecture students who know it best and are (by their major) predisposed to form attachments with buildings. At times, this student passion for the building has created friction with administrators, as Architecture Hall (like any building of its age) has underwent a series of renovations, sometimes changing aspects of the building which students and faculty would have preferred remained unaltered. Through the 1960’s and ‘70s, student and staff backlash lead the management of Architecture Hall to shift from renovation and expansion, to historical preservation – perhaps best seen in the enduring status of the Hillsdale Urinals.[1]

As early as the mid to late 1970s, Nebraska University (NU) officials have had plans to renovate Architecture Hall in a number of ways. Renovations were intended to allow the College of Architecture (by then operating out of the eponymous Architecture Hall) to accommodate growing enrollment in Architecture programs, while also expanding studio space for more advanced architecture students. Architecture Hall would also go on to accommodate classes outside of the Architecture program, a service which it continues to provide today. In this regard, Architecture Hall was not unique. The late 1960s and ‘70s saw NU officials drafting plans for the expansion of much of City Campus, with new dorms and classroom facilities being constructed to accommodate UNL’s expanding enrollment. This should be considered in the context of broader college enrollment throughout the United States, which saw a steady increase throughout the 20th century, particularly through the 1960s and ‘70s. At UNL, the 1970s saw a 5% increase in overall enrollment, achieving enrollment levels which are comparable to the student body of today, but were unprecedented for the University prior to this point. This increased enrollment necessitated the development of new classroom spaces – a goal which would have figured prominently in campus-wide renovation plans at this time.[2]

Later, NU directors would approve a series of renovations specifically for Architecture Hall. Initiated in January, 1978, these renovations were intended to remodel Architecture Hall, while maintaining the “existing structure” of the building. This dedication to preservation was primarily motivated by financial concerns – if NU officials wanted to get federal funding for the remodel, efforts would have to be taken to preserve the building, as its 1894 construction placed it on the National Register for Historic Places. These renovations were welcomed by College of Architecture faculty, as the design for the remodel was chosen through a competitive design contest, which Architecture Dean W. Cecil Steward claimed produced a “teaching tool in itself.” Steward also praised the “realistic” and “economical” nature of the design. Some measures were taken to limit the cost of the remodel. Most prominently, the new Architecture Hall incorporated the old Law College building into its design, saving the University the cost of demolishing the old Law building. This also reduced the need to construct new classrooms, as officials were able to simply repurpose old law classrooms. By 1987, this remodel was completed, culminating in a rededication ceremony for the “new” Architecture Hall. This ceremony was broadly supported, and featured speeches from Dean Steward, Board of Regents Chairperson Margaret Robinson, and Student Advisory Board President Greg Gensler.[3]

The success of the 1987 remodel was not the norm. Previous attempts to change Architecture Hall were met with far less enthusiasm, and outright hostility from many students and faculty members. This is best demonstrated through a peculiar incident in the fall of 1980, surrounding the fate of a notable door. Architecture Hall features a prominent wood door on its eastern entrance. The door is framed by marvelous brickwork and imparts a profound sense of the buildings age and history upon passersby. Perhaps because of the iconic status of this door, NU directors became concerned that it may need maintenance to prevent the appearance of age and wear. To this end, they ordered the door repainted with a special coat, designed to prevent these harms. Unfortunately, this paint was a noticeably different color than the original door – an alteration which would cause uproar among students at the College of Architecture. These students, outraged at what they regarded as the “murder” of the old door, held a series of public protests, culminating in a “funeral” held on Architecture Halls’ lawn. Students refused to enter through the east door until it was restored and compared its “desecration” to the death of a dear friend. Architecture student Rick LaRosa described the door as a “friend who has stood by us through hot and cold, one who has never left us or failed us.” Another protesting student, Chuck Dalluge, implored students to recognize that “If they can do this to this door, they can do it to anything…We can’t become insensitive to the beauty of buildings…”[4]

The students were not alone. College of Architecture faculty joined some of the protests, with Dean Steward stating that it was his opinion that “the paint is a defacement.” Steward noted that this new coat of paint was a departure from the building’s historic presentation, observing that “Ever since the building was constructed there has been a natural wood finish on that door.” In response to this outcry, UNL physical plant director Harley Schrader claimed that Steward and the students were “splitting hairs” over the issue, as the door in question was not even the original door from 1894 anyway, and that this paint was necessary to prevent future repairs from being needed. Unsatisfied with this explanation, Dean Steward requested the removal of the new paint – a request which Schrader refused to grant. Though Schrader would ultimately win the dispute over the door, it is not hard to imagine how this level of pushback, both from students and faculty, would create a problem for NU directors, and serve as a catalyst for reform going forward. With this in mind, the relative success and ease of the 1987 remodel should be seen as the product of lessons learned – NU officials didn’t want a repeat of the 1980 door incident.[5]

The east door was not Architecture Hall’s only notable landmark. As with any building of its age, Architecture Hall boasts a series of treasured features and traditions which students and faculty had become attached to and wanted to see preserved. Among the most notable and enduring of these is the Hillsdale Urinals, which still stand in the first-floor men’s bathroom. These urinals are unique for their age (they were initially patented in 1901, though the date of their initial construction is unclear), and for their size. As of 1999, Architecture Hall boasted the largest urinals west of the Mississippi, courtesy of the mighty Hillsdale. Indeed, a Halloween tradition emerged around these urinals, wherein students and faculty would gather in the bathroom, pour some champagne down the urinal’s drain, and say some words regarding the unfolding fall semester. As the years wore on, this celebration began to serve as a costume party as well, creating a climate of camaraderie and friendship among Architecture students and faculty. The precise origins of this celebration are unclear. The dominant theory, advanced by former Architecture student Dena Wangberg claims that the ceremony grew out of a celebration of the successful acquisition of a patent for the urinal’s, which would place the first celebration in November 1910. If true, this would make the Hillsdale celebration one of the oldest continuous traditions at UNL. Though this particular celebration was unique to the College of Architecture itself, the Hillsdale urinals enjoyed (and continue to enjoy!) prominence throughout the campus, with a series of campus newspaper articles diving into their illustrious history.[6]

One key difference between Architecture Hall’s many renovations has been the role of faculty in the process. Early on, renovations were primarily handled by the board of regents of the broader University of Nebraska system with most direction coming from the office of the Chancellor at UNL. The incident with the door, discussed above, marked a major change in this regard. Alarmed at the depth of student passion for the original construction of Architecture Hall, NU regents began to incorporate faculty from the College of Architecture in future deliberations on the topic of renovations. A major advocate for this change was College of Architecture dean Steward, who took the side of students on the issue of the door, and openly criticized the way administrators had handled Architecture Hall’s preservation. Dean Steward had, by the time of the door incident, been dean of the College of Architecture for several years and had helped push for some of the previous renovations, arguing that they were necessary for UNL’s Architecture program to keep up with similar schools. However, Dean Steward was nonetheless clear that he felt Architecture faculty ought to be involved in the renovation process, so as to help maintain the historical integrity of the building. Steward felt that this was especially true of Architecture Hall, due to its obvious historic value, echoing claims by Architecture student Stan Gove that “A lay person would object [to the handling of the building], let alone architecture students.” By echoing student concerns, Dean Steward signaled that he felt similarly, applying pressure on administrators to allow greater faculty input.[7]

Architecture Hall has been a fixture of the University of Nebraska-Lincoln’s campus for nearly as long as the University has existed. Through this period it has filled a variety of roles and undergone several renovations. Despite these changes, the building has retained a distinct and fundamental identity, allowing students from several generations to strongly identify with the building. The emotional attachment many have developed towards Architecture Hall has greatly helped preserve the building’s unique identity – as overly zealous efforts to change the building were met with strong student and faculty opposition in fall, 1980. Since then, College of Architecture faculty (lead, at the time, by Dean Steward) have held more sway over the fate of the building – influence they have used to preserve the distinct identity of Architecture Hall, while still allowing for renovations necessary to allow the building to keep up with the demands of the University.