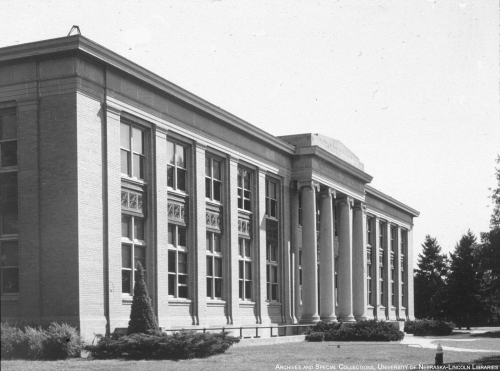 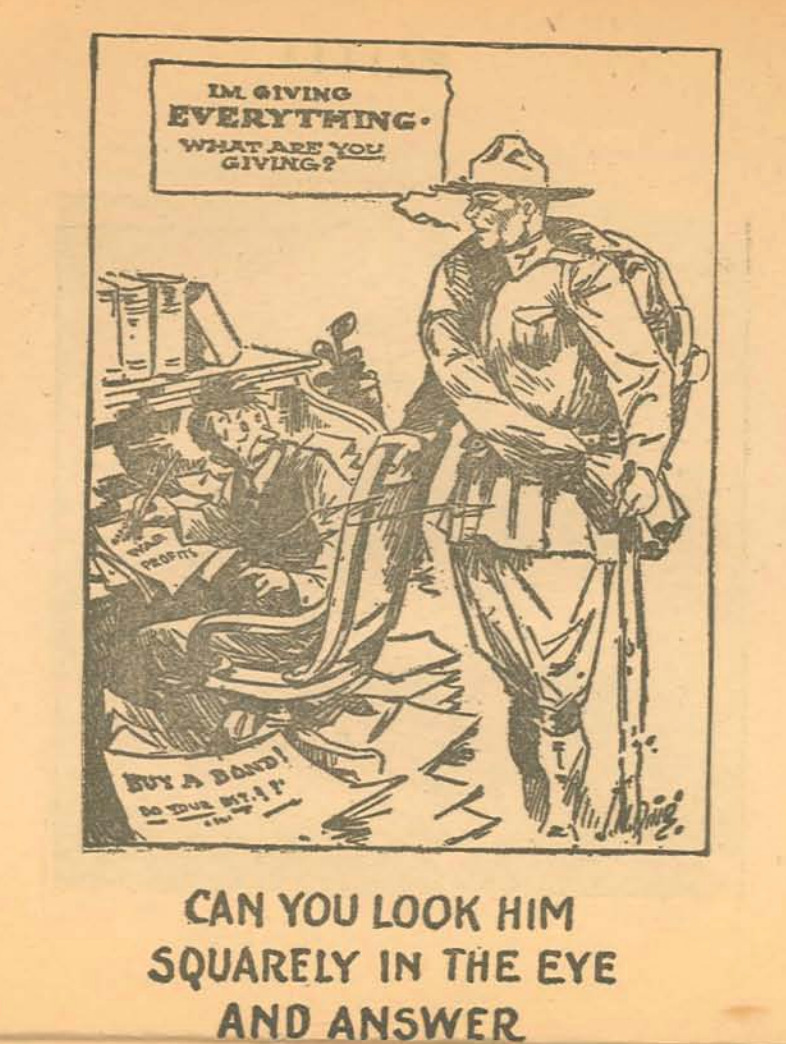 The United States of America entered the Great War on April 6, 1917. Although formally in the war for only about a year, the United States saw many of the same societal, cultural and political impacts as many other countries did. These various effects of the war quickly reached Lincoln, Nebraska. The University, as well as the faculty and students, experienced many changes during this time. The Chancellor at the time, Samuel Avery dealt with these changes caused by the uncertainty of war by contributing to the spread of patriotism which led to great developments for the University of Nebraska. In the 1910s, Chancellor Avery was responsible for a large growth in student population. This can be attributed to a long sought-after stability that he provided. The university had experienced many new Chancellors throughout their existence and with this stability, a steady growth in numbers occurred. In a seven year span from 1910 to 1917, the student enrollment grew from 3,992 to 5,405 students. [1] With steady growth came prominence, and soon the University was very well recognized nation-wide. This recognition came as a direct result of Nebraska’s ability to be seen as an efficient and dedicated institution. Nebraska University began establishing multiple noteworthy organizations on campus such as fraternities and sororities as well as athletic teams that helped aide its steady population increase. [2] Before the United States joined the war, Nebraska University had the fifteenth highest student population of colleges in America. [3] Unfortunately, a large population of those enrolled at Nebraska was made up of young men who were the majority of those eligible for war. The student population took a massive hit, as it did on many other college campuses around the same time.

Even though the University saw a dramatic decline in enrollment numbers, Avery was still able to find ways to contribute to the war efforts. Avery allowed the use of UNL’s mechanical engineering laboratories to the government, stating that “allowing the government to use our facilities during this time is something that would not have been questioned by a true patriot.” [4] The University, led by Avery, also helped aid with food production. Through, drying and canning foods, University of Nebraska-Lincoln was able to contribute to the supply of food being sent to those in Europe.

One of the University’s largest means of help was the Student Army Training Corps (SATC). Once America had entered the war, they were dedicated to exhausting the majority of their efforts on fighting. The military looked for skilled people to fill a plethora of roles but more often than not, these positions had something to do with combat. As stated previously, many college students were being pulled away from school all over the country due to the war. This ultimately led to the creation of the SATC. The government was eager to establish a military unit in every college which could muster up at least one hundred students capable of aiding the war effort. Eventually, the SATC was able to appear on one hundred and fifty-seven campuses nationwide. The University of Nebraska-Lincoln’s SATC was a short-lived program as it was founded in 1918 and transformed into the Reserve Officers’ Training Corps (ROTC) shortly after the war had ended. That being said, SATC was able to contribute to the University’s help with the war because it could effectively train students to become soldiers while also providing them with a college learning experience.

Avery also believed that the University was able to indirectly contribute through the spreading of Patriotism. On April 24th, 1917, a Patriotic Convocation was hosted by UNL. Students and faculty of the university showed their alacritous response to the declaration of war by showing up to the large parade which made its way to the Temple building. At the convocation Chancellor Avery and many of the university’s professors spoke to inspire patriotism as well as create a big support for the government during the war. Avery used his time speaking at the convocation to support the purchasing of liberty bonds. Created and sold by the United States government upon declaring war, liberty bonds were a way for citizens of all social classes to support the war efforts. Avery stated that he was “determined to invest all that can be spared.” [5] This convocation led to the creation of various campaigns which were in support of the United States’ soldiers and the involvement of America. One of these being the Four-Minute Men. Originally a national organization, a branch was founded in Nebraska by Professor M.M. Fogg who taught in the Department of Rhetoric. The Four-Minute Men was an organization that consisted of many groups around the country which gave four-minute speeches concerning American war effort. They were known nation-wide for spreading the news about the war as well as helping with Liberty Loans campaigns. Nebraska’s branch quickly became one of the most efficient because although they had a small population to speak to, they were third in four-minute speakers. [6]

Patriotism was also spread by Samuel Avery when he made the decision to allow full semester credit to any student of the University who dropped out to contribute to the war in a way that was considered “helpful and patriotic”. Even though there were plenty of men across the United States contributing to the more physical aspects of the war, the government was still worried that they would be short numbers in men trained in a variety of subjects. This decision made it dramatically easier for students to serve their country in ways that were not fighting. The University Senate even allowed any student who dedicated their efforts to agricultural, engineering or any other industrial work for the government to still earn credit hours. [7] By allowing any student who gave their time and effort to contribute to the war full semester credit, Avery indirectly created a precedent that encouraged students and faculty to devote a part of their lives to war contribution.

Avery’s patriotism was also apparent in the creation of policies allowing medical, engineering and agricultural students to graduate early. Doing so provided a large amount of people trained in their profession to contribute to America during the time of war. This huge funnelling of students directly to war efforts in a timely manner was very effective. Yet again, Avery had shown an impressive spirit that helped spread patriotism. Unfortunately, Avery’s plan paired with the tremendous need for manpower decreased the student population dramatically. While the student population decrease was a very apparent problem, Samuel Avery and his progressive mindset had created the foundations that would allow the University to grow in ways never before seen.

After the end of the Great War, America experienced a huge swelling of pride. The United States of America had developed a newfound prestige when everything was said and done because of their efforts in aiding England and France against Germany and other countries in the Central Powers. The citizens of this country were very proud of their efforts towards the war and the effect they had on the positive outcome. This sense of pride was no different in Lincoln, Nebraska as it was across the rest of the United States. Samuel Avery shared much of the same optimism as his fellow American citizens. This was seen in a speech given in 1919 over the progress of the university through the past decade. Avery begins his speech highlighting some of the achievements of the university in the ten years past including the growth that many departments within the university had experienced due to the expansion of campus and the new facilities that had been built.

A primary example of this department growth can be seen in the medical college. Not only was there a massive increase in enrollment numbers but the medical college also experienced a huge change in curriculum being taught. [8] This curriculum shift can be directly correlated to the change in focus of medical practices on the battlefield. Once focusing on physical wounds, the work of medical professionals began developing into clinical pathology that focused on the formation of diseases. [9] By observing the chemical composition of bodily fluids. Professionals were able to focus on the various causes and spread of diseases. This enhanced knowledge and way of study made for many advancements in the field that trailed back to curriculum being taught in medical colleges across America.

The medical college was not the only college that experienced departmental growth. The College of Agriculture saw great improvements in its facilities due to the demand for agricultural advancements caused by the war. The need for food in Europe played a large role in drawing students towards the agriculture college. Enrollment numbers for the college began growing in 1916, a year before the United States joined the war effort. “The Farm”, also known as Nebraska’s East Campus, saw a large amount of advancements to accomodate to the increase in enrollment numbers. Some of the most important developments were the construction of the Agricultural Engineering Building and the animal Pathology and Hygiene Complex. Construction began in 1916 but did not end until 1918. The construction of these two buildings quite obviously draws attention to the war’s demand for agricultural developments. East Campus saw even more growth when the Dairy Industry Building and multiple barns saw upgrades during the war. To add to the large amount of physical developments, East Campus also saw an increase in quality of scientific research used to boost crop growth. The college conducted multiple experiments that tested different irrigation systems as well as crop serums and their effect on crop growth. Eventually the college of agriculture was able to develop better ways to help crop growth in poor weather conditions. These advancements allowed the college to become a leading example of agricultural progress to farms all throughout the state of Nebraska.

In all the destruction that the Great War caused, it was hard to see past some of the crazy effects it had on the world. Due to this it may have been hard to see a lot of the developments and progress made by America. On a smaller scale, the University of Nebraska took a huge responsibility in dedicating itself to the war efforts. This could not have been done without Chancellor Samuel Avery, who took it upon himself to inspire patriotism among faculty and students on Nebraska’s campus. Avery also used his role as a leader to help bring more modern advancements inspired by the war to Nebraska. This made for growth in many colleges within the university, most obviously the medical, agricultural and engineering colleges. Samuel Avery’s leadership combined with the tremendous effort of the people of Nebraska paved the way for large amounts of success for the university in the future.