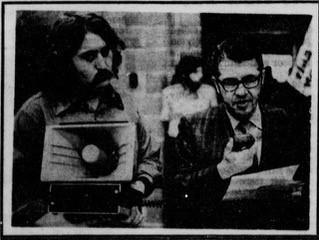 Photo from the May 6, 1970 Daily Nebraskan of UNL president Joe Sohnik (right) and Dan Ladely (left). 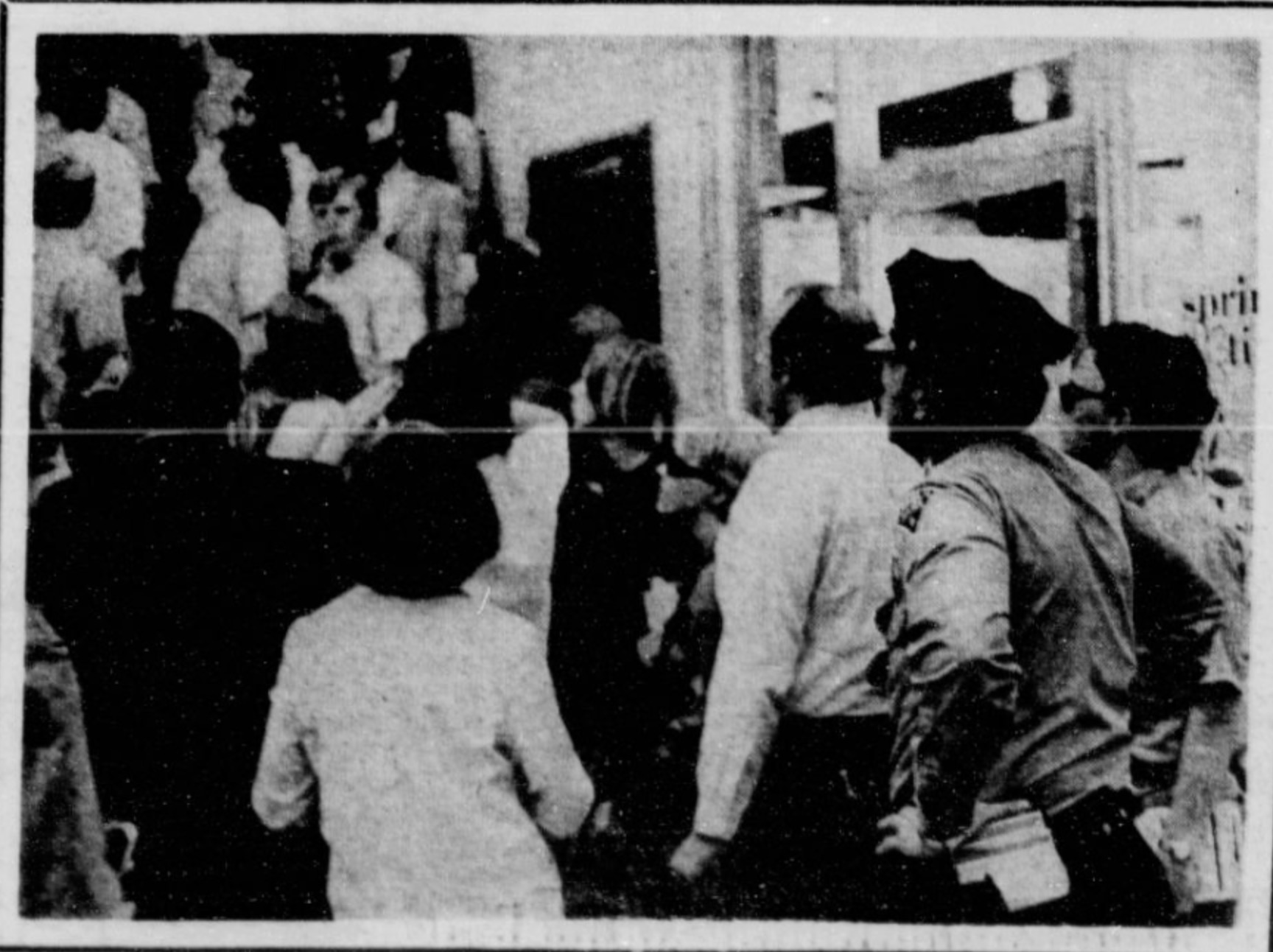 Photo from the May 5, 1970 issue of Daily Nebraskan of the ROTC sit-in.

Life on college campuses was forever changed in 1955 when Dwight D. Eisenhower announced that the United States was going to invade Vietnam. However, tensions did not start to pick up until 1970, the year that the United States began bombing North Vietnam.[1] Many students all around the country disagreed with Richard Nixon’s decision to bomb North Vietnam and began protesting the war as a whole. As a result, these student protest groups began official student organizations on college campuses. The University of Nebraska-Lincoln took part in forming their student organizations as well, such as the Students for a Democratic Society (SDS) and the Nebraska Draft Resistance Union (NDRU). While the University of Nebraska-Lincoln did not play as large of a hand in the Vietnam protests, activism was still very much alive during Nixon’s time as president.

The Students for a Democratic Society was founded nationally at Ann Arbor, Michigan, in 1959 as an organization ensconced in the civil rights movement.[2] At the University of Nebraska-Lincoln, the SDS was founded in 1965 by a Pennsylvania State University graduate, Carl Davidson. Davidson went to Lincoln to pursue a graduate study in philosophy when he formed the chapter. The similarities between the national and college organizations included emphasizing civil rights, opposing the Vietnam War and the draft, and putting a higher value on free speech and local issues. One of the first call-to-action events on the SDS’s agenda was a teach-in on South Africa. The event was a week-long demonstration against the apartheid state. Karl Shapiro, Reverend Hudson Phillips, and Carl Davidson were the speakers at the event. On March 20, 1966, sixty-some students demonstrated in front of four businesses that had ties to the South African government.[3] While the demonstration went well, some Lincoln residents did not agree in the sentiment.

The following day, Wayne Kreuscher, the news editor of The Daily Nebraskan, wrote a scathing piece condemning the actions of the students. Kreuscher started out by stating that a society of thinkers should not be delegated only to people who carry signs. Kreuscher then said that the demonstration only accomplished two things. “First it displayed the ignorance of the common Lincoln citizen who could make no comment but ‘They must all be Communists.’” Second, he said, “It represented the University and the University’s intelligent and thinking students-who crave for this atmosphere inside of their society-poorly.” Kreuscher said that the teach-in that followed the demonstration went well and believed that there should be more teach-ins; however, “The demonstration which included many people who know little about South Africa was a disgrace to the school.” He was fierce with his rhetoric, calling the students “misfits” and “little girls” who made the knowledgeable majority look foolish. He went on to say that he wants teach-ins, discussions, and intellectual conversations but not at the expense of publicity. He called on the students of the university to organize teach-ins and then called out the marchers for seemingly only desiring publicity and not intellectual conversations.[4]

Mixed emotions about the SDS on Lincoln’s campus were coming to fruition even before the demonstration in front of the four businesses. On March 17, 1966, Steve Hungerford, the managing editor for The Daily Nebraskan, wrote a piece on Dr. Kenneth McFarland’s speech at the Union ballroom that he gave the day before titled, “McFarland–Outdated (He Loves His Country)”. The piece outlined Hungerford’s support for the presumably pro-war speech that Dr. McFarland gave. “As McFarland said, it’s about time that someone, sometime, somewhere spoke up for America.” As Dr. McFarland questioned why protest movements in America received so much publicity, so did Hungerford. The answer that Dr. McFarland came up with was publicity, just as Wayne Kreuscher stated in his piece. Hungerford painted the SDS and the Student Nonviolent Coordinating Committee (SNCC) as wholly un-American. “Frustrated as such, they strike out at anything which represents success. How many of these organizations ever supported anything American?” The Vietnam war was patriotic and supporting it was part of the American way of life, according to Hungerford.[5]

The Daily Nebraskan did publish an opinion piece in response to Hungerford’s titled, “Vietnam Policy Protested”, written by Rev. Bruce K. McSpadden. McSpadden disagreed with the idea that he, as a sympathizer of SDS and SNCC, was un-American and did not support America. He argued that the groups did have goals and that these goals were more American than many other groups on campus. McSpadden then turned to the treatment of the African-American community as an example of what true un-Americanism was. Speaking about the unemployment rate and family income of African-Americans: “This is un-American. I protest, and I would be willing to march in the streets of Mississippi or of Lincoln to help white America stop this perversion of ‘the American way,’ the way of freedom and democracy.” McSpadden said that the American way was peace, yet America was being hypocritical with the war in Vietnam. To actually find peace, McSpadden said it must be done through “1. The stopping of the escalation of the war; 2. The permanent halting of bombing of North Vietnam; 3. The issuing of a non-obscure statement that we recognize the Viet Cong as a legitimate party . . .  and 4. That we begin to move toward the development of a coalition government of South Vietnan . . . ” McSpadden said that America’s role was not to police the world but to spread peace throughout the world.[6]

A new student group began to form on Lincoln’s campus 1967 when Dr. Charles Marxer came to the campus on August of the same year. Dr. Marxer was hired by the university as a temporary professor in the philosophy department and would soon become the founder of the NDRU. The National Mobilization Committee to End the War in Vietnam organized students to march on the Pentagon in protest of military conscription. Students at the University of Nebraska-Lincoln did not participate in the Stop the Draft Week event and Dr. Marxer found that troubling. In a 2017 article, Anchondo explains, “Marxer took issue with their inaction and sought to change student worldviews at the university while simultaneously attempting to dismantle the conscription of young Nebraskan men to fight an unjust and illegal war.” The first announcement of the formation of the NDRU came on March 21, 1968 by Dr. Marxer. He planned to curb the praise for the war and the draft by educating students with “special purpose leaflets,” promoting a “We Won’t Go” pledge for draft-eligible men, counsel men who were available for service, and advocate peaceful draft resistance. [7]

At the Hyde Park forum that Dr. Marxer put together on March 21, 1968, Dr. Royce Knapp spoke in opposition to Dr. Marxer. Dr. Knapp observed that dodging the draft was illegal and pounced on Dr. Marxer’s call to do so, saying, “Without the law we have anarchy.” Dr. Knapp instead called for students to take advantage of the democratic process of the United States and use voting as their voices. That way, students would be able to elect representatives who held the same positions as they did. The response to Dr. Knapp was overwhelmingly positive while the response to NDRU and Marxer was overwhelmingly negative. The response by the community, local politicians, and the university was negative as well. Citizens wrote to the chancellor, Republican State Senator Clifton Batcheldor of Omaha called for Dr. Marxer’s termination, and the university board criticized Dr. Marxer’s speech. The board investigated Dr. Marxer’s teachings in class and his protests outside of class and concluded that he did not violate any laws, but they would allow his contract to expire.[8] This seemed to be the end of the student groups at the University of Nebraska-Lincoln and of protests in general, however, the worst was yet to come.

On April 30, 1970, Richard Nixon broadcasted to the American people that United States troops had invaded Cambodia in an attempt to attack the Viet Cong headquarters.[9] This announcement by Nixon possibly caused the largest negative reaction by the student activists all around the country, primarily at Kent State University. Kent State anti-war protestors rallied on May 1 and called for another protest on May 4.[10] The events leading up to and the May 4 protest would shock the nation. On the night of the 1, protestors built bonfires in the streets, hit police cars with bottles, and store windows were broken. The entire police force was called to the area and Mayor Leroy Satrom declared a state of emergency. On the May 2, Mayor Satrom asked Governor Rhodes to send the Ohio National Guard to Kent. When the National Guard arrived, the ROTC building was in the process of burning to the ground and over 1000 protestors surrounded it. On the 3 of May, there was peace between the Guardsmen and the students; however, Rhodes flew into Kent and gave a speech, condemning the protestors as the worst kind of people. On the 4th of May, protestors rallied into the Commons area even though the rally was meant to be prohibited. The Guardsmen pushed the rally onto a practice football field as the protestors threw rocks at them. They began to retreat but suddenly, some of the Guardsmen turned and shot their weapons. A majority shot into the air and into the ground, but a few fired directly into the crowd, killing four students and wounding thirteen.[11]

At the University of Nebraska-Lincoln, students planned a protest in response to President Nixon’s address which would take place on the upcoming Monday­—the same Monday that the tragedy at Kent State occurred. Monday’s rally had just begun when news broke that the Kent State students were killed by the National Guard. The rally almost immediately stopped as a hundred students rushed to the county draft board office in an attempt to stop operations at the office. The plan failed, so the students then marched to the ROTC building, also called the Pershing Military and Naval Science building. Dan Ladely, a protestor at the time, remembered it. “[We] marched over there, and there wasn’t any security at all.” “I think there was an old man who was campus police standing in the lobby holding the door, trying to hold the door shut, and somebody just jerked it open, and we all went in.” The final number of protestors at the sit-in was close to 1,800, and the university called it a “mostly peaceful” protest.[12]

Faculty members joined in on the sit-in as well, this included Dr. Rozman, Dr. Philip Schribner, Assistant Professor of Philosophy Dr. June Levine, and Dr. David Levine. The students who led the occupation, including Dan Ladely, called for six demands of the university. These demands included amnesty for any arrested that day, administration backing of the NSA strike of classes, suspension of ROTC until the end of the war, removal of guns from campus, and all free university classes gaining one credit toward degrees. However, the university could not meet the demands of the students. Activism died down in the weeks following the ROTC building sit-in. By May 12, students went to class as was normal, strikes ended, and as the semester ended, relations had become what they were before the announcement by President Nixon.[13]

While student activism was more prominent in other universities, the University of Nebraska-Lincoln played a large role in protesting the Vietnam war. Campus relations were split seemingly between students and between students and faculty. What was clear was that the university allowed students on both sides to express their opinions on the war in Vietnam; whether it be through speech, teach-ins, or protests as severe as storming the ROTC building. President Nixon’s time in office pressed these relations to a possible breaking point, but the University of Nebraska-Lincoln did not break into chaos. The campus held on until activism died down.