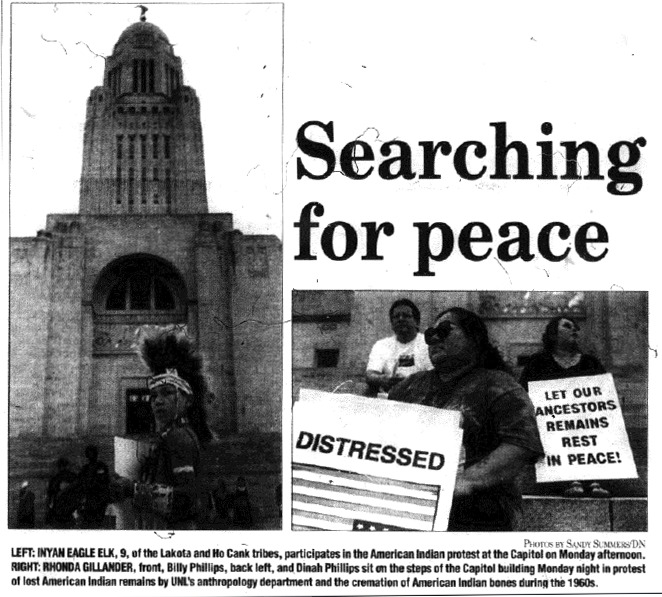 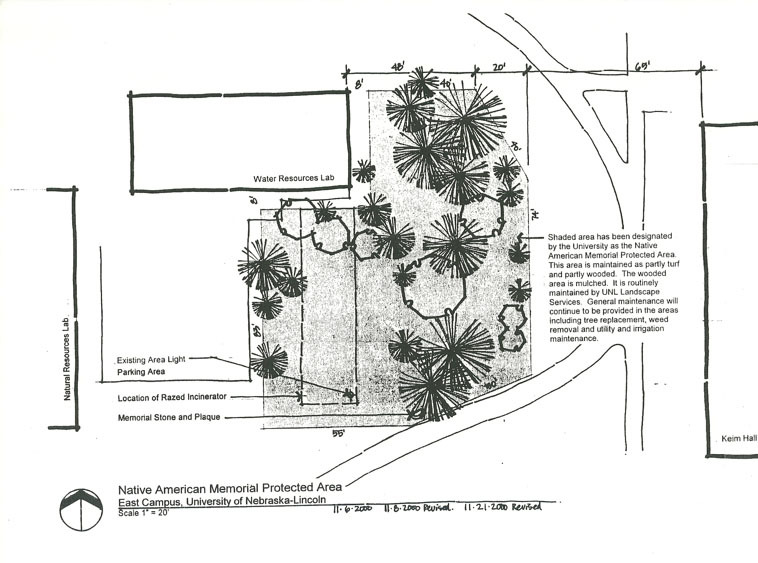 In 1998, the University of Nebraska-Lincoln’s anthropology department admitted to a breach of human rights and morally questionable actions. During the mid-1960’s, anthropology department chairman Preston Holder ordered the remains of Native Americans to be incinerated on East Campus.[1] This came to light amidst another scandal involving Native remains, when Omaha bones were found in Bessey Hall 109 in December 1997, under the care of professor Karl Reinhard. [2] The scandal rocked the UNL campus and the Native tribes in the Plains region for the next few years. Reinhard’s misuse and disregard of the bones was a violation of the Native American Graves Protection and Repatriation Act (NAGPRA) and the scandal received significant media attention, but the 1960’s incident remained only a faint echo in the background.

Under the Native American Graves Protection and Repatriation Act of 1990, all culturally identified remains and objects were to be returned to their respective tribes, and remains of unknown cultural affiliation were to be given to the tribe from the area where the artifacts were found.[3] The remains found in Bessey 109 had obviously not been repatriated, since they were still sitting in the classroom. The Lincoln Journal Star newspaper reported on the discovery of the classroom and exposed the story to the public in July, 1998. A former graduate student of Reinhard, Stan Parks, claimed that he had been instructed by Reinhard to tamper with documentation upon their discovery “to keep the Omaha people and anyone else from knowing about these items.”[4] There were rib bones strewn in a drawer with trash, a mummified ear pierced with a copper ring in the lobe, and student reports that Reinhard manipulated a child’s skull to make it look like it was talking. A visiting associate professor discovered the secrets of Bessey 109 when preparing to teach a class, and was shocked when he described an assortment of bones and skeletal remains with no regard to decency – it even looked like some bones had been dropped on the floor and swept into the corner by a janitor. [5] Reinhard denied mistreatment of the bones, and months later even sued his one time graduate student Parks for slander. [6]

On September 1, 1998, the university met with tribal leaders and agreed to return the remains. Regarding the agreement, chancellor James Moeser said, “This is the beginning of the end of this painful period in the university’s history.”[7] He was very wrong, as Reinhard and the University were caught in a whirlwind of a scandal that would last another year and a half. A coalition of Native American tribes worked with the University to return and rebury the remains, but it was not an easy or quick process. The coalition group and the University had been working towards a September 30th paperwork deadline, but found out that only half of the remains in the September 1st agreement could be repatriated because the other half was claimed by three different federal agencies.[8] The Ponca tribe of Oklahoma requested a new inventory be done because it suspected the inventory was not accurate, and inventories could be challenged when they were first published in the federal register of the National Park Service.[9] Southern Ponca representative Randy Thomas had seen parts of the collection multiple times at the state museum and saw discrepancies between what he counted and the labels on the boxes. UNL offered to do an exit inventory, the final step before repatriation, but the Ponca tribe did not think it would be adequate and requested specific people to do a full, new inventory.[10] They were turned down, because the University said it was not required by NAGPRA to complete a brand new inventory. The coalition group of Native tribes pushed for sanctions against Reinhard and called for him to be fired, since he remained a tenured professor while the Native tribes actively fought for their ancestors’ bones. They outlined 14 separate allegations against the UNL professor, going through official channels to bring down Reinhard and appealing to the Professional Conduct Committee for a review of the professor’s conduct. [11]  The University had agreed to return the identified remains, but hundreds of other culturally unaffiliated artifacts remained in the anthropology department’s possession, and the group of tribal representatives made a joint claim to them in September. [12] The request for the culturally unaffiliated remains had to be reviewed by a federal committee, and the decision to repatriate them was not approved until December. [13] These were just some of the difficulties faced on the road to repatriation and peace for both sides.

After the September 1st agreement an investigation was launched by the Nebraska State Patrol into whether or not violations of state criminal code were committed by the University of Nebraska-Lincoln and the anthropology department, but the investigation found no reason to pursue legal charges. [14] However, the report only focused on violations of state law, and violation of NAGPRA fell under federal jurisdiction. A copy of the report was sent to a U.S. attorney unaffiliated with UNL to represent a neutral party, and the possibility of federal charges loomed over the University. [15] Native response to the patrol report was less than favorable, and area tribes prepared to ask for a federal investigation before the U.S. attorney even finished his review. [16] They felt that Reinhardt was in direct violation of NAGPRA, let alone violations of morality and spiritual respect to human remains. Even before the state patrol report was released there was outcry, and Randy Thomas, co-founder of Grassroots NAGPRA in Lincoln, expressed doubt at its validity and neutrality because of personal University connections to the state patrol offices. [17] Tribes called for the sanction of Reinhard and said they felt the University had not done enough to punish Reinhard despite fully knowing his actions. [18] In a December letter to the editor at the Lincoln Journal Star, Randy Thomas articulated why he and other Native Americans took a strong stance against Reinhard and the University: “Make no mistake about it. As a Native American I intend to continue this fight (now well over a year old) until my ancestors are returned to nourish Mother Earth, and their spirits can finally find peace. Until that time arrives at UNL and all other public and private educational institutions, I will never end my struggle to free the ancestors and acquire, once and for all, the legal ideals of ‘equal protection under the law.’”[19] Thomas’ letter was an emotional response to a UNL professor who wrote that the remains should be kept and protected under claims of academic freedom. Thomas explained why the remains are so important to the Native people they belong to, asking the rhetorical question of what would happen if a white person’s grandparents’ remains were dug up and studied like his ancestors’. Thomas’ letter demonstrated the tension that existed between Natives and white academics for years, constantly being made worse by too many claims to academic freedom over the freedom of Native people, and invasive anthropologists that found their culture to be something studied and prodded. Unfortunately UNL served as only one example of things gone too far and too wrong.

In May 1998, around the same time the state patrol investigation started, UNL hired local lawyer Robert T. Grimit to conduct an investigation into the University’s compliance with NAGPRA. Grimit’s report stated that, overall, UNL’s compliance with NAGPRA had been “exemplary,” though he admitted mistakes were made and “there are areas in which UNL’s efforts to fully comply in a timely fashion with NAGPRA failed, or is perceived to have failed.” [20] The tone of the Grimit report was dutiful but conciliatory towards the University, admitting that there were problems and Reinhard was to blame, but otherwise it tried to clear the University of responsibility. UNL was certainly culpable though. There was something to be said about the dialogue and understanding that began, and eventually the remains were repatriated, but it was inadequate to the Native tribes directly impacted and the harm that had already been done.

Notably, the Grimit report contained echoes of the 1960’s incineration of remains. But they were faint, comprised of a single paragraph under the heading “Miscellaneous Issues.” Grimit explained that while investigating Reinhard and the Bessey 109 incident other issues arose that he connected to his investigation, including the admittance of the 1960’s incineration. He said there was no cover up of the matter like had been alleged, because of one simple point: at the time, no one cared. “…there was simply no reason for anyone to go public and there is no evidence to indicate that anyone regarded the issues as other than simply not relevant.” [21]

Compared to the staggering amount of press and attention that the Bessey 109 incident received, the lack of documentation or coverage of the 1960’s incineration was startling. Of all the research done for this particular paper, only two sources mentioned Preston Holder by name as the chairman that ordered the incineration. [22] Further research may turn up other leads, but a preliminary albeit thorough look uncovered next to nothing. Holder was a very respected anthropologist who did a lot of work with Native Americans, and on first glance it would be assumed he had respect for them, but the incineration of remains allegedly ordered by him brings this into question. Even if Holder was a respectable academic who appreciated Native Americans, the fact that he found it reasonable to destroy human remains because they were not useful was a result of the times and indicative of the overall attitude towards Natives. This clearly illustrates the difference between the 1960s and the 1990s, and the effect that the passage of NAGPRA had. Despite the shortcomings of the NAGPRA laws and the difficulties faced in the Bessey 109 episode, UNL serves as one example of how progress has been made. In the 1960’s, prior to NAGPRA’passage, there was no repercussion for blatant and disrespectful destruction of Native American remains. Truly, no one would have given it a second thought during the 60’s, when some Native tribes were still struggling to achieve the right to vote and basic citizenship protections.

The agreement of September 1st included a proposal to dedicate a plaque on East Campus at the location of the incineration.[23] In September amidst the thick of the controversy, UNL professor Robert Hitchcock called the situation “an incredible educational opportunity,” which was echoed by anthropology professor Peter Bleed who said just discussing the issues and the effort put forward by both sides would be good for students.[24] Senior anthropology major Regina Thunder Hawk said anthropology students needed to be educated to respect the Native community, and communication within the department needed to improve. Hitchcock said the department planned on having meetings with students to further understanding of the situation and foster learning.[25]

Twenty years later, the plaque remains on East Campus as a physical testament to the struggle for understanding and respect between this University and the Native American community. The memorial is one of the few sources that remembers the 1960s’ incineration, and marks the understanding that has grown since such times that burning the bones of people was hardly considered a footnote. The passage of NAGPRA was a great step, but as 1998 showed, not always enough.