The Battle Between Reformation and Continuity at UNL 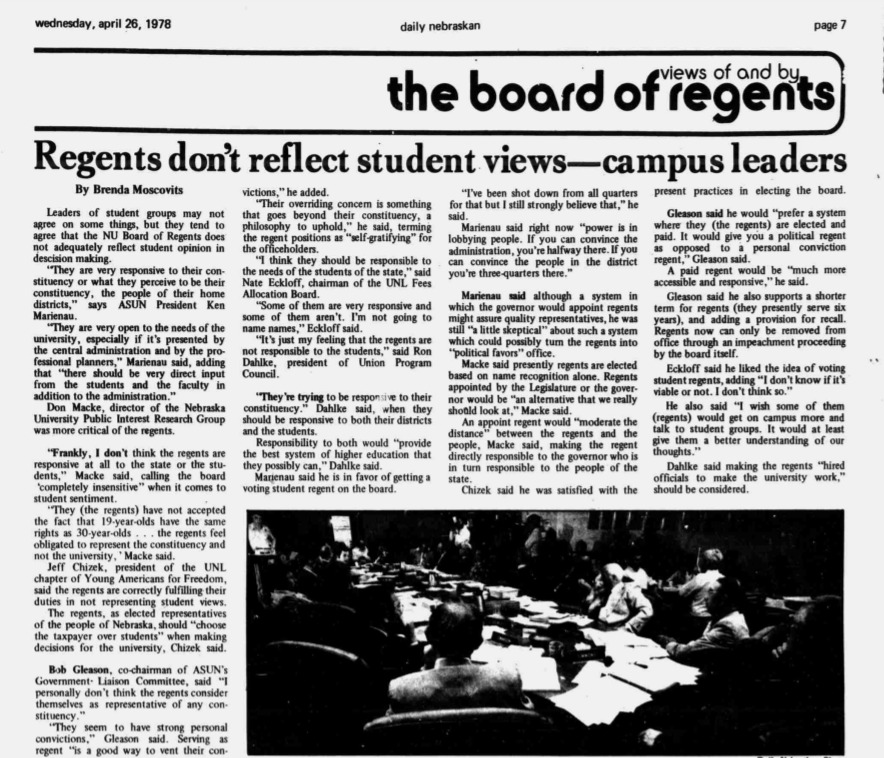 Photo from the Daily Nebraskan., April 26, 1978, page 7, "Regents Don’t Reflect Student Views- Campus Leaders" Student leaders expressed their dismay at the actions of the regents and their lack of interest in student concerns and issues. 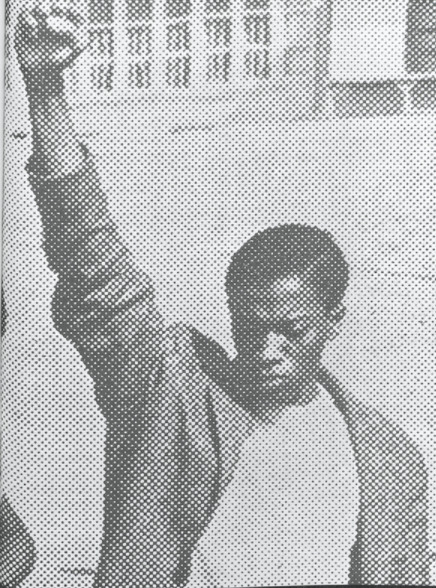 Rebellions and protests aiming for social change became commonplace at the University of Nebraska in the 1970s. Students across the globe were paramount in advocating for and implementing their believes and striving for a more liberal and progressive society. At UNL, students wanted to implement legislature that represented rather than went against their opinions on social matters and activism. Aiming to introduce measures that alleviated the mounting tensions in the 1960s, they advocated for gay rights, abortion rights, civil rights, women’s rights, and an end to the Vietnam war. However, their views were contrasted with the more traditional and conservative regents who wanted to maintain regent authority and limit student power. A large gap emerged in the 1960s between the Regents and the students and this only widened in the 1970s. The 1970s were therefore defined by constant clashes of opinions and protests against the Regents. Despite the Regents attempts to keep UNL life the same, the 1970s was one of immense change at UNL and ultimately, the students succeeded to make campus more progressive and inclusive.

Student consciousness of fighting for issues such as civil rights did not start in the 1970s. In the 1960s students were beginning to become restless on campus and they began fighting for these movements, particularly for the end of the Vietnam War more than they had done in the past. The activities the students undertook and the support for social movements in the 1960s began to foster an atmosphere of protest and dissatisfaction that was aimed not only at the policies of the government, but at university policies. During the 1960s enrolments increased dramatically from 8,700 in 1960 to 19,000 in 1968 making the atmosphere increasingly tense towards the end of the decade.[1] The tensions caused by the increase in student presence on campus and student consciousness spilled over into a large protest aiming to end the Vietnam war in 1970. News has travelled about a group of four students who lost their lives at Kent State University after protesting against the Vietnam war, angering the students further. This brewed the environment for protests as people were advocating for their rights and privileges which they felt were being neglected and ignored. As Knoll writes this was the start of a decade of tension and “Pandora’s box was opened.”[2] Students had had enough with the government and enough with their actions not being heard. The leaders summed up the feeling at the protests and said the students felt like they were being “shot at”[3] and were not happy to sit back and let this slide by. The radical atmosphere of the 1960s accumulated in the 1970 and it can be seen as the start to decade of protest and change.

The regents, unhappy with this unruly behaviour launched an inquiry into the disturbances of May 1970. Senator Terry Carpenter stated “we should bust every student who gets out of line, who violates the law. Any student guilty of misconduct should be kicked out of school.”[4] Threatening the students with expulsion from campus only angered the students more as they believed in the right to protest, using their voices and standing up for what they believed in without being punished for doing so. Dan Ladely, a UNL student, recollected that the students ‘had been in a very quiet way for a long time, but we just wanted to step it up and become a little louder."[5] Whilst Ladley was addressing the Vietnam war specifically, his sentiment is representative of the 1970s and the attitudes of the students for other issues on campus. The Vietnam War and the inquiry into the demonstrations on campus signifies the tensions between the regents and the students coming to a head but it proved that the students were willing to fight for their beliefs, even if that meant going against the regents.

Aside from the Vietnam war, the students also had many successes which helped to introduced considerable changes to campus life. Conversations about the civil rights and black rights movements were sweeping the country and there were calls by the students to enhance and protect civil rights and to make sure these rights were equal for everybody. The persistence and advocacy from students increased awareness on these topics as well as making some of their goals a reality. For example, UNL implemented a Black Studies programme in 1971 and a year later in 1972, the Institute for Ethnic Studies was created.[6] This was a huge step for ethnic minorities on campus as the teaching of these subjects had largely been untaught or rejected up until this point. Similarly, the discussions and activism for women’s rights helped to introduce the course ‘Women In Contemporary Society’ in 1971 and the continuation of these discussions made Women’s Studies available for students as a major and minor course in 1976.[7] Activism on campus encompassed a wide range of topics and through persistence, their efforts were rewarded.

Despite these progressions, however, in April 1978 the Daily Nebraskan reported that many students still felt that the Regents did not reflect the students in their opinions or when making decisions.[8] This feeling of a disconnect between the students and the Regents was shared amongst many prominent student groups on campus. The students were united both in their activism and also in their opinions on the Regents and campus control. Ken Marienau, the president of The Association of Students of the University of Nebraska (ASUN), said that the regents needed to have "very direct input from the students and the faculty."[9] Voicing their opinions would therefore be more effective and prominent issues would continue to be raised. The Regents however, felt the students were not responsible enough to have more autonomy and therefore they continued to reject or ignore opinions from these student groups. Even though the students were successful in implementing programmes such as Ethnic and Black studies they still faced backlash and setbacks from the Regents. Nevertheless, throughout the 1970s students continued to push against the Regents to implement their ideas and the Regents faced persistent backlash from students.

The fight for student issues remained prominent as the decade progressed and the topic of co-ed visitation was one that the students fiercely protested for. When given a vote, 85% of students agreed it was a good idea, but the board continued to reject it until finally conceding in 1975 after constant protests and housing violations by students. [10] Violating housing rules was one method employed by the students to protest against the Regents lack of cooperation with what the majority of students wanted implemented on campus. Believing visitation in student dorms would give the students too much control, the Regents constantly fought against popular opinions from students. However, the students were eager for more autonomy on campus and so continued to fight for visitation until it was eventually accepted. Even though the majority of students were in support of co-ed visitation, the Regents denied their demands exemplifying the gap between the Regents and the students. The Regents wanted to control campus life for students, but the students were eager for more input and authority and eventually they got this in many different areas.

Another example of unjust regent policies was exemplified in in 1977 when Jane Fonda, a known political activist and an advocate for the termination of the Vietnam War was invited onto campus by students. This was met with resistance from the Regents who thought it was unacceptable to have a speaker on campus who contradicted their own beliefs. Responding to this, the Regents introduced guidelines for speakers coming onto campus in 1978.[11] Again, the attempt to control student activism was not popular amongst students who felt the rights they thought they had were being limited and controlled by the Regents. Another infringement on the rights of students occurred in 1973 when a member of the board Regent Moylan suggested that abortion procedures should be prohibited and not take place in the Medical center.[12] Although this was not implemented, it shows how University officials and board members were actively seeking to go against more inclusive and liberating acts which affected the rights and freedom of its students. Even though some of their attitudes might differ from the Regents’, they had a fundamental right to express themselves and their beliefs through their own actions or supporting the actions of others. Continuing outdated attitudes from the 1950s and 1960s, the Regents opposed the progressive ideals of the youths who were fighting for a different future than the one the Regents were proposing. The students wanted progression and development in their personal and academic lives on campus and they saw the Regents as preventing this, resulting in the constant conflicts seen in the 1970s.

The students were very vocal in advocating for their rights and showing dissent towards the backwards policies of the regents, but there were also many professors who stood up for both their own rights, and student rights. Professors Stephen Rozman and Paul Olsen were both active members in fighting for and supporting student issues and also raising their own problems to the Regents. In an article, Professor Paul Olson stated that he thought the students deserved more rights and respect than they were being given.[13] He was often in support of the students and student activism and would often make statements in the Daily Nebraskan which called for change. He believed that the administration wasn’t doing enough to promote better lives and wellbeing for students and professors on campus. Similarly, Professor Rozman was seen in comparison to a martyr for supporting the end of the Vietnam War. He was found to have played an active role in the 1970 Kent State protests at UNL and therefore did not have his contract renewed. His actions went against the Regents and supporters of the war and so he was let go. Outraged at this decision, students marched to Chancellor Varner’s office after his dismissal and supported professor Rozman whilst showing their distaste for the Regents actions. The regents were punishing those who did not align with their ideals for UNL, but their ideals were not aligned with many students and staff at UNL. Professors and students alike were constantly protesting and fighting against what they saw as repressive measures campus which the Regents tried to push through despite the resistance.

The regents and administration were often at odds with the liberal practices student activism was pushing forwards and continued to restrict student progressions and freedoms. They contradicted the views of the students on many issues such as co-ed visitation, abortion, and the Vietnam War. In the 1970s the political climate was one of change and progression and the Vietnam War exemplifies the spilling over of tensions between students and Regents and marked the decade to follow. Conflicts in opinions led to many protests and demonstrations by students who used their increasingly loud voices to help push change forward. As Knoll writes, ‘the war, civil rights, political injustice, and major modifications in sexual and social conventions were bound up together for them [the students].’ One success wasn’t the main goal for students because they wanted numerous changes and measures introduced on campus. Continual refusal to cooperate and carry out liberal plans made the students turn to protest and demonstrate to achieve their activism. By the end of the 1970s, students helped to introduce many progressive measures on campus, but this wasn’t achieved without altercations, setbacks and refusals. Overall, this period was a constant back and forth between the Regents and the students fighting for control and freedom and it resulted in the students making UNL unrecognisable from the previous decades.

The Battle Between Reformation and Continuity at UNL