The 1920’s Woman, Progressive or Submissive? Women on the Conservative Campus of the University of Nebraska-Lincoln During the Roaring Twenties. 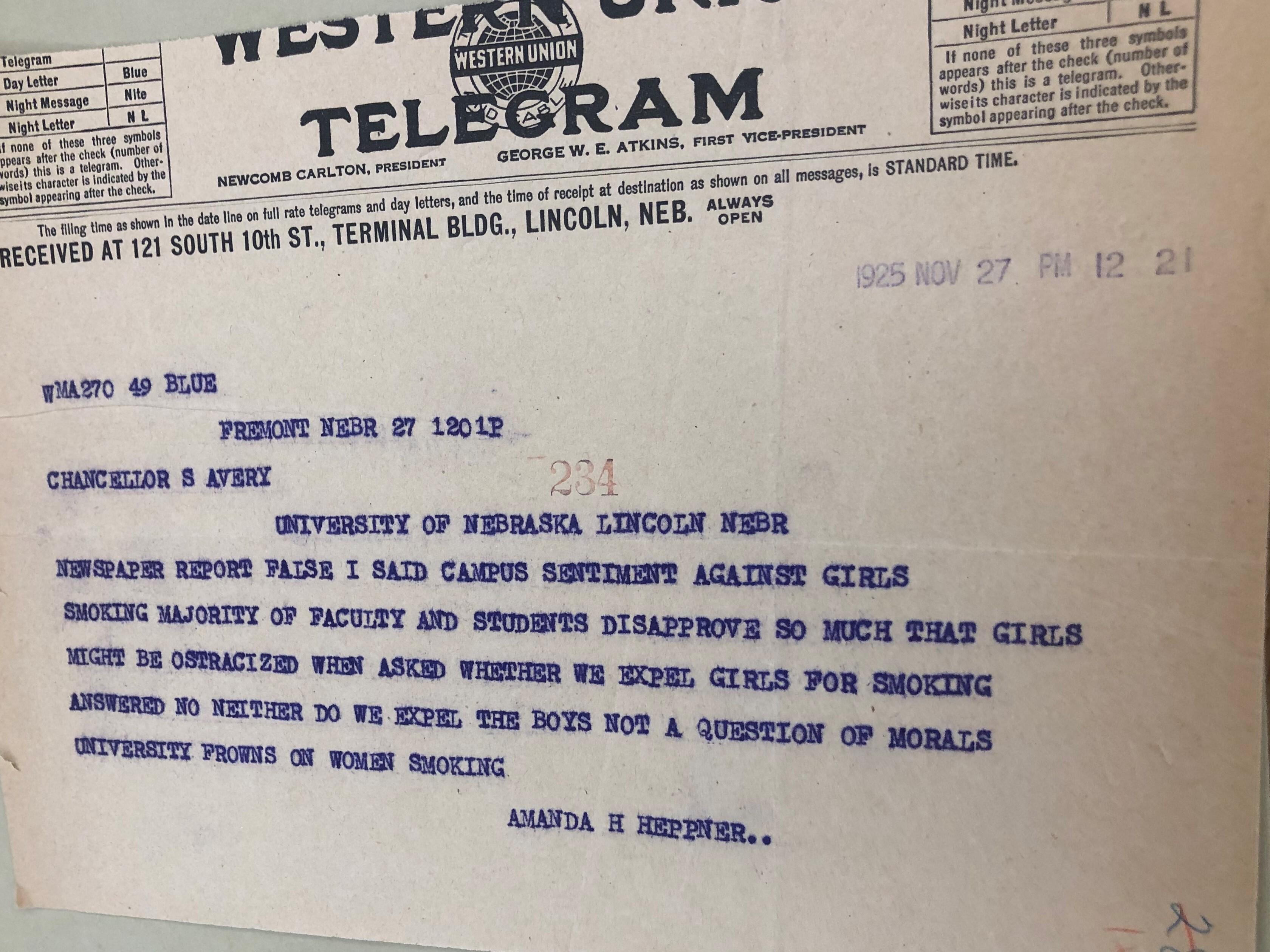 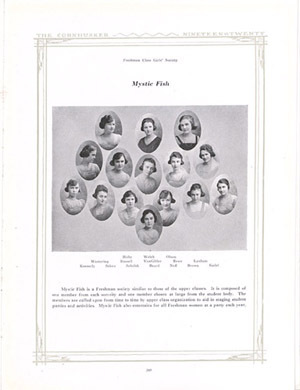 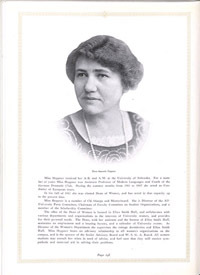 The 1920s was a very progressive time for women of the United States of America but only to certain women. Rural areas were not jumping onto the liberal bandwagon and get stricter with their women. The Roaring Twenties is portrayed as a time of change in many movies, but in some areas of the country, nothing was changing. Due to the shift of morals nationally in the 1920s, Universities’ at a local level like the University of Nebraska-Lincoln had to shift to a stricter mindset towards their students. The Roaring Twenties helped kickstart the change of women’s lives at a national level while many at a local level were staying stagnant.

While this paper is primarily focused on the history and lives of white women during the 1920s, it is not intended to take away from women of color stories. After extensive research, there was not enough evidence to include women of color in this paper. Their stories were not in the archives or the newspapers, and this is due to the abundant racism during this period of time.

There is difficulty gauging the unspoken rules of a university due to the lack of tangible regulations. While there were standards on the University of Nebraska-Lincoln’s campus, rules like smoking on campus and curfews were bent many times during the years following World War 1. Chancellors, Board of Regents, and the Dean of Men and Dean of Women helped reinforce these regulations on campus. Due to the societal shift in morals nationally, the local universities became stricter in enforcing the rules and regulations. In the twenty’s, universities were looked at as prestigious, which meant only the few who could afford it could attend. Therefore, the university had to look a certain way to uphold their portrayed and principled image.

Dean Heppner, in a frantic state, wrote to chancellor Avery that the “Newspaper report false I said campus sentiment against girls smoking majority of faculty and students disapprove so much that girls might be ostracized when asked whether we expel girls for smoking answered no neither do we expel the boys not a question of morals university frowns on women feeling.”[1] In 1924, the Student Council tried to “adopt [a] resolution as a result of numerous complaints,” and the only way to do this was to “bar smoking from campus.”[2] Sororities played a big part in shaping the image of the campus. Delta Gamma, like many sororities, had a creed stating, “on the right side of temperance they’ve taken their stand,” and “they don’t use tobacco, nor do they drink, and those that do so, are vulgar, they think.”[3]

Not only did the University of Nebraska- Lincoln control what happened on campus, they also tried controlling what occurred off-campus. Women and men living together was very frowned upon during the 1920s, which is the reason why men and women had separate dorm buildings. Dean Heppner wrote to Chancellor Avery on multiple occasions about some of the boarding houses off-campus needing to have stricter rules with women and men living there. Dean Heppner goes on, stating in one of her letters, “I should take in dealing with a man who refused to observe the University rule, that men roomers and women students should not room in the same house.”[4] Separation between men and women didn’t stop at the living quarters. Men and women could not play on the same fields for sports. Additionally, they had separate surgical wards, different clubhouses, and separate gymnasiums.

Many students on campus felt the constraint from the university’s rules and regulations because they were controlling the student’s studies, where they lived, what time they had to be home, and what they wore to class. In Prairie University, it states that Dean T.J. Thompson was lenient with the rules, but “Dean Heppner was not flexible. She ruled, for example, that all University dances should end by 11:30 so that women could be in their houses by 12:15.”[5] The student council at one point tries to get the curfew extended, but Dean Heppner denied it.

Smoking was very looked down upon, especially if you were a woman. In the yearbook, it states that a woman walked into the Alpha O sorority house, where she saw something absolutely “absurd.” There were two women at the end of the hall with “something in their mouths that had fire at the end and smelled like what the boys smoked.”[6] Ruthie, the woman who is telling the story in the yearbook, then goes on to state in all capital letters, “THE GIRLS HAD CIGARETTES IN THEIR MOUTHS.”[7] The Alpha O’s made a name for themselves because of their smoking habits. In a yearbook statement, it states that the Alpha O’s have “a window in their chimney so no one would suspect a thing when they see smoke pouring from it.”[8] People would consider women who smoked intolerable. At a meeting with sororities, the council asked if any Pi Phi’s were present in the audience. There was one who was there, but then they stated that “Florence Swihard is ruled ineligible. She smoked once.”[9]

Throughout the twenties, there are significant changes, but in very unexpected areas. In Universities, however, there were different opinions on what women should be doing. Sports and clubs are where many women shined throughout their time at the University of Nebraska-Lincoln. Louise Pound and Mabel Lee come to mind when talking about women’s sports on campus. While these two women hated each other, they indeed showed their opinions, which is different for women who were born during the Victorian era and were taught to be passionless. The Women’s Athletic Association was developed in 1917, but the membership grew large in the 1920s. While women had representation with the Women’s Athletic Association, they didn’t have the funds and support like the Men’s Athletic Association.

Women were very much separated from men as much as they could be at the University of Nebraska-Lincoln. While many women were allowed to study at the university, many couldn’t participate in activities because they weren’t accepted. Mable Lee states in a talk that women should be allowed to play sports, but they should only play it on their campus. There would be no traveling for women’s sports; only on-campus teams would compete against each other.[10]

Clubs are where women during the twenties thrived unless they wanted to be in the Engineering, Pre-Health, and Business clubs, as evidenced in the yearbooks throughout the twenties, due to there being no women on their rosters or pictures. However, Home Economics, Teachers, and Literary clubs were a big hit in the women’s world. There were many clubs centered on women though like, the Silver Serpents, Women’s Self-Governing Association Officer, the Y.M.C.A, Mystic Fish, and Senior Girls Advisory Board Officers. These clubs were ways that women could show how intelligent they are and what they can accomplish on campus.

Students’ opinions on coeducation varied from person to person.

There was a significant complaint towards coeducation because many people believed that coeducation challenged masculinity. Many reports state that women perusing upper-level education, like college, reduced birth rates, which was not smiled upon. The Daily Nebraskan says, “However, if 1 per cent equaled one woman, the celibacy of that 6 per cent would mean a loss of 22.2 children to the total births, according to the figures set as the normal rate by eugenists.”[11] Birth control, however, was on the rise, which could have been the underlying reason behind the fall of birth rate.

The number of women who were attending school changed drastically. A prime example of this is in a Daily Nebraskan Article stating, “the inference was made that since women’s rights were increasing in number, it was entirely justifiable to slam the doors in their faces.”[12] Women attending the university was thought of as “women’s wrongs or more clearly, wrongs to women.” “Between the Lines” was conceived as one of the best plays that the Temple building put on in the year of 1929. The play showed the “woman as the homemaker and the husband as the breadwinner.”[13] The main goal of this play was to put the focus back into who should hold power and what a “good woman” would do.

The 1920s is the time that women were fighting for the right to vote, which also paved the way for women to attend higher education. Fighting for their independence branched off into coeducation because the women felt like they deserved the same schooling as their male counterparts. While many colleges were educating women in certain things such as teaching and nursing, classes like science, math, law, and philosophy were only offered to women in only women’s colleges. Studying at an all-women’s college was popular until coeducation hit the streets due to women wanting to chase better opportunities. Many schools were made coeducational like the University of Nebraska, but Ivy Leagues made smaller colleges under their name for women to attend.

Many believed that when women came to a coeducational university, men became “less humane.” Rollo Walter Brown had a different opinion on coeducation while he was still on the opposition side of it. Instead of thinking that “coeducation is wrong because it brings men and women together without the steadying restraints of the home,”[14] he believed it was wrong due to the way men perceived it. Subjects that were then considered humane and “womanish” were languages, history, fine arts, and literature. Mr. Brown goes on to state that “because women would elect”[15] these subjects, many men attending coeducational universities “would avoid them due to them being considered soft or sisterly.”[16]

Many events led to a very progressive time for women during the so-called “Roaring Twenties.” At the national level, many things were changing like lifestyle, fashion, hair, academics, sports, etc., many things at the local level were halted to a stop. Universities made tremendous strides in becoming coeducational; some went backward with controlling studies, curfews, and their stances on smoking and drinking. It would take many years for some regions of the United States, like Nebraska, to catch up to the progressiveness of other areas.

The 1920’s Woman, Progressive or Submissive? Women on the Conservative Campus of the University of Nebraska-Lincoln During the Roaring Twenties.