In the Hesperian published on Charter Day, February 15, 1894, Chancellor James H. Canfield writes an overview of the University of Nebraska-Lincoln and its purpose as an institution.

The University of To-day [sic]

I am asked to write briefly of the present University, the University as it is to-day [sic], the University of and for the Academic year 1893-1894. The sketch is not to include statistical information. That can be found in the catalogues and in other printed matter issued from the executive office. I am to speak of the position of the University in the state; of the aims of the University; of its spirit and life.

It is exceedingly doubtful whether there is another state University in the country which recognizes so clearly and accepts so willingly its place in the state system of public schools. It is not always either easy or pleasant to do this. Men eager in the pursuit of their specialties are not often willing to deny themselves success in a chosen line for the sake of more immediate usefulness and more direct ministration. It is a rare prophet who is content to go without honor because of a sense of duty which makes him abide in his own country and in his own house. There is so much more fame in a learned monograph, so much more applause for a bright magazine article, than can be found in the daily round of lecture room and laboratory. Then, too, it is far more stimulating and pleasurable to associate with oneâ€™s equals or superiors than to be subject to the constant strain of instruction. The attraction which characterizes original investigation, the charm of the sense of pre-eminence and power, the fascination of a position on a pedestal surrounded by followers and admirersâ€”it is difficult to turn from all these to the far more humble calling of a teacher. Yet all the conditions of faculty life in this institution are such that these are almost daily sacrifices. The men and women who have toiled through the quarter of a century just closing, and those who are now at work, are unwilling to separate the university and the people. Slowly as the latter may seem at times to move, we are willing to wait for them, to labor with them in the upbuilding [sic] of Nebraska, to work them even in ways that may not be appreciated.

This spirit accounts for the continuance of the Preparatory courses; an endeavor, and a very costly and trying endeavor, to keep touch with the eighty per cent of the school children still without opportunity for secondary education and sound training. This spirit explains the maintenance of short and special courses for those who for any reason cannot push through to graduation. It lies back of the permission given students of mature years to select and studies which they are prepared to carry. It sends members of the faculty ito all parts of the state; visiting and examining high schools, counseling with local school authorities, planning and attending Farmersâ€™ Institutes, speaking before agricultural and industrial organizations, prominent in all educational gatherings; quick to observe, eager to plan, and ready to execute in behalf of their fellowmen. It is a recognition of this helpful spirit, of this willingness to serve, that makes the University the centre [sic] of such practical and far-reaching influence; that draws to the institution each year such associations as the State Board of Agriculture, the State Historical Society, the State Press Association, the State Horticultural Society, the State Teachers Association, the State Dairymenâ€™s Association, the Annual Corn Exhibit, the State College Y.M.C.A. meeting, and others of like nature. This it is that led the last legislature to make the heads of certain University departments acting state officers: as botanist, chemist, geologist, and entomologist. This it is that inspired the united appeal to the last legislature by every state industrial, agricultural, professional, and educational organization made for a building suitable for the business and other meetings of such organizations, to be erected upon the University campus.

So it is this determination to serve all, to reach the greatest number with what the greatest number demands and needs, that has broken the old fixed courses into eight groups of equal values; that has made the curriculum so flexible; that carefully studies the time-schedule in order to avoid all possible conflicts; that extends the hours of work from eight in the morning till six at night; that permits evening work in the libraries and laboratories; that makes Saturday almost as busy a day as any other in the week; that organizes the Science Club, the Camera Club, the Microscope Club, the Political Economy Club, the Botanical and Historical Seminars, and the several other similar associations of students and faculty.

It is in recognition of this spirit of helpfulness and with keen appreciation of it, that the names of nearly twelve hundred students are upon our rolls today; that these students present to the most casual observer evidence of a sincerity of purpose, a maturity of thought, a strength of character, and earnestness of life rarely known elsewhere; that their intelligence, their self-control, their patience, have united to preserve unbroken the cordiality and good-will of the student body and of the relation of instructors and instructed; that without a â€œruleâ€ on our books, the work of this vast body of young people moves forward so regularly, so intensely, so methodically, so evenly, with such unbroken peace, that there has not been a case of discipline before the faculty for more than two years; that without dormitories, under no surveillance, with perfect freedom of intercourse, these students have mingled in classes, in the halls, in literary societies, as spectators at athletic games, in the most varied social relations, for twenty-five yearsâ€”yet no whisper of scandal has ever attacked the name or reputation of one of these young women; and if any young man has so far forgotten himself and his obligations, opportunities and responsibilities as to deviate from the path of duty and rectitude, it has been a case of very willful and deliberate error which would have occurred anywhere else and under any other conditions.

This then is the University of today: an integral part of the state system of public and free instruction; with a material equipment infinitely in advance of any other in Nebraska, though not yet meeting the full demands of the work; crowded to overflowing with earnest, industrious, determined students; in the hands of an able, loyal, self-sacrificing faculty; backed by the enthusiastic loyalty of a splendid body of graduates; and with an ever-increasing hold on the full confidence of the state.

What the University of the near future will be may easily be surmised. 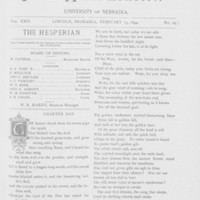 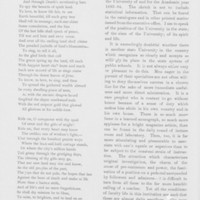 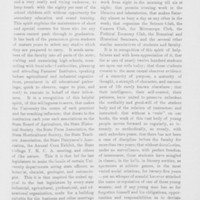 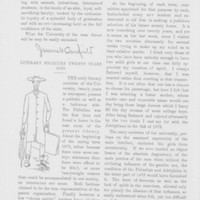