Article from the "Daily Nebraskan" over the upcoming Schiller's Day

Great Poetâ€™s Hundredth Anniversary Will Be Celebrated May 9.

Next Tuesday, May 9th, the University and particularly the German department will celebrate the one-hundredth anniversary of the great German poetâ€™s death. Preparations have been going on for considerable time to worthily share i the homage that is given him at home and abroad, wherever man is civilized are making laudable efforts to fitly express the reverence and admiration Americans feel for the great German gymnasiat knows some of Schillerâ€™s plays and poems much better than do American college students. Who hasnâ€™t read Tell, or Wallenstein or Maria Stuart or Das Lied Von Der Glocke? How much pure delight is ours when reading the beautiful lines of Schillerâ€™s German. The reader forgets all about the declensions and prepositions and other grammatical apparatus, and simply follows him in his ideal flight to escape the commonplace.
The University should greatly appreciate the fact that the German department has gone to so much trouble to give the whole university community a Schiller-Abend. As the program shows, some of the finest musicians in the city will lend their aid to make the occasion a memorable one. Parts of some German plays will given in the orginal. Suitable costumes have benn sent for. The committee which has the matter in charge are planning appropriate stage settings and other decorations. The plain moral of all this is: Keep your Tuesday evening free so that you can spend as hour or two with Schiller.
Johann Christoph Friedrich Schiller was born at Marbach in Wurtenberg, Nov. 10, 1759. His father was an army surgeon. At the age of fourteen he entered the military academy founded by the Duke of Wurtemberg. He first selected law, but afterward changed to medicine. At the age of twenty-one he graduated. Even before his graduation he wrote the revolutionary drama â€œDri Rauber,â€ which reflected his feeling of rebellion against the petty tyranny of the school. He was so hemmed in by the Dukeâ€™s commands that he was forced to flee and became an exile from his country if he would remain true to his ideals. His life ever after was one long struggle,--his years of struggle with poverty, his attempt to develop a noble character, his sincere efforts to understand life, a struggle against sickness and disease. Yet he wrote lyrics, drama, philosophical treatises, which cannot be excelled. The last ten years of his life were spent in loving companionship with Goethe. He died May 9, 1805, at the age 45.
Carlyle says of him: â€œHe was a high ministering servant at truthâ€™s altar, and bore himself worthily in the office he held.â€ 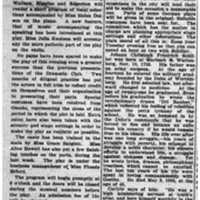