An article looking back on the iron gates after 90 years.

1982 marks the 90th anniversary of the purchase of the old iron gates, university landmarks, that now stand at the entrances to the columns northeast of Memorial Stadium. Those gates were the only entrances to the original University of Nebraska--Lincoln campus in 1892.

The gates stood at the east entrance of University Hall, the only building on campus in 1892. They made complete an iron fence that surrounded the original campus bounded by 10th, 12th, R and T streets, covering 11 acres.

The purpose of the fence was to keep out wandering cows and late strolling students, according an article in the June 24 issue of the Daily Nebraskan.

The fence was removed in 1922 but the gates remained. The gates were used as bulletin boards for 20 years until they were moved in 1942.

New locations were chosen, one at the corner of 14th and R streets near the entrance to the student union building and the other at 12th and R streets, in front of Pharmacy Hall.

In 1942, as a result of much debate and an unofficial Daily Nebraskan poll which found 90 percent of the students polled in favor of saving the gates, the iron gates were saved. Rather than being donated to a university scrap iron drive, the iron gates were restored as monuments of the original campus.

Five years later, in 1947, the gates were moved again, this time being stored in the â€œarchivesâ€ under the west stadium. The gates were later placed on the grounds of the Agricultural Campus.

In June of 1947, a group of UN-L alumni formed a committee to find a means of establishing a permanent memorial for the old gates.

The â€œIron Gates Committeeâ€, as it was called, headed by Mrs. Fred Putney of Lincoln, found a permanent place for the gates.

A gift from Ralph Mueller of Cleveland, Ohio, a UN-L graduate of 1898, made possible the restoration of the weather-beaten gates.

The old iron gates were hung once again at the entrance to the columns near Memorial Stadium.

They were dedicated on June 11, 1955, as part of the annual university alumni roundup program. Each gate has a plaque on it with the appropriate wording for the memorials of the original university campus.
By: Theresa Goodall 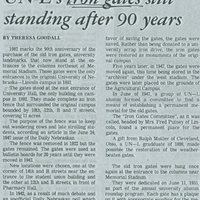