This article, written by Ray Walden, appeared in the Daily Nebraskan on February 2, 1978. The article describes the debate about bilingual education in the United States and points out that Nebraska, in 1922, played apart in the monolingual, English only, education system in the USA. It describes the opposing points of view of those in favor for and those against bilingual education. By looking at education in Nebraska within the larger national context of race and education Professors Ralph Grajeda and Miguel Carranza explain the importance of education with a cultural perspective (click on thumbnail to enlarge image).

Bilingual education is now new in the United States.

German immigrants in many cities supported German-English bilingual public schools between 1880 and 1917. In Louisiana students learned in French and in New Mexico, Spanish. New York City children have studied in such languages and Chinese, Italian, Greek, Yiddish, and French.

German-English schools were closed by anti-German sentiment in World War I. Other bilingual schools suffered from the subsequent rise of post-war Americanism and isolationism.

Nebraska played a part in the decline of this earlier phase of bilingualism. In the 1922 Myers vs. Nebraska lawsuit, the U.S. Supreme Court ruled that English was the only acceptable language for instruction.

Much of the political pressure for bilingualism came from Hispanics and Chinese who don’t want to see their culture burnt by their failure to assimilate.

“Until very recently in the Southwest, students were penalized for speaking Spanish in the schools because the schools took it on themselves to Americanize students,” recounted Ralph Grajeda, UNL assistant professor of English and modern languages and director of ethnic affairs.

A sign on a cafeteria wall in a largely Chicano school read, “Be smart, sound smart, use English,” he said.

“That tells kids that their problem lies with their being Chicano and we have to bring them into the mainstream,” he said. “Prior to the 1970s we hadn’t been talking about the weaknesses inherent in the melting-pot theory.”

Assimilation means a rejection of one’s own identity, Grajeda said. Some change their names and deny their background. Others can’t melt into the white majority because their skin is too dark or their features too ethnic.

“Many of the groups that came over to the United States went through hell in trying to be American” said Miguel Carranza, UNL associate professor of sociology. “Many of the ethnic groups were made to feel inferior because they didn’t speak English.”

“This is a country that has built itself out of cultural differences,” he said. “Language is an important part of that ethnic difference.”

One function of non-English languages is to keep cultural traditions alive. Another is to keep communications open between young people, who tend to drop their native language, and their parents or grandparents who may cling to the language and customs of their homeland.

Bilingual education, according to Carranza, is needed to preserve students’ connections with their heritage, to take advantage of this country’s rich ethnic diversity and to build up the self0image of non-English students with a learning environment which doesn’t assume the inferiority of their culture and language.

Grajeda sees bilingual education as a way to keep history, to give a different view of history, which American schools traditionally have presented only from the European perspective.

Critics of bilingualism warn that it could divide American society and isolate ethnic groups from each other because, they say, it emphasizes differences rather than commonalities.

A key opponent of Colorado’s new law mandating bilingual-bicultural education for the lower grades, Colorado Sen. Hugh Fowler, claimed that the 1975 legislation subsidizes minority political activities by Chicano militants. He and Colorado conservatives fought the law on the grounds that it was un-American to teach children about Spanish, Indian or Asian cultures.

Teachers’ associations are split on the issue. The American Federation of Teachers sees politics as inextricably involved with bilingual education. But the National Education Association supports it as a way to help non-English speakers and keep them in school.

“It’s not going to make us any less American,” Carranza said in response to critics of bilingualism. The benefits to English speaking students will be as great as to non-English speakers,” he added.

“It should not be impossible for you to both keep your ethnic culture and succeed in the contemporary world. The goal is not to remain alienated. On the contrary, the aim is to allow them to develop and live the way they want to live. The poor and the alienated don’t have these choices.” 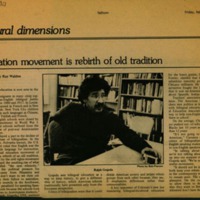 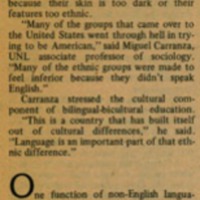