The 1909 club photograph, a brief history of the club and its activities and a list of members and officers for 1908-1909.

The Komensky Club is an organization of the Czech (Bohemian) students. It is named in honor of John Amos Comenius, the Czech educator of the seventeenth century. It is the first and only organization of Czech students in America.
Its organization at Nebraska dates back to the month of November, 1903. At that time, upon the suggestion of Prof. B. Shinek, of Iowa State University, twelve Czech students met and organized the first “Komensky” club. The idea met with such universal approval that soon after similar organizations were effected among the Czech students at the Iowa State University and Ames, Iowa, Urbana, Illinois, and Minneapolis, Minnesota. In addition to the university organizations, the alumni of the various schools have organized clubs among the Czechs of Cedar Rapids, Iowa, South Omaha, Table Rock, Humboldt, Wilbur, and Crete Nebraska, and other Czech communities.
In January, 1908, the several clubs sent delegates to Cedar Rapids, Iowa, who met with representatives from the local club. At this convention a constitution was adopted and an organization effected know as the National Federation of Komensky Clubs. It is believed that this federation will materially strengthen the separate clubs and secure a better cooperation in the spread of the doctrine of education among the Czech people than has heretofore been possible. At Nebraska the movement has resulted in the establishment of a department of Slavonic languages. Thus many Czechs, through a study of their native language and literature, become interested in education and culture in general. Elsewhere, reading circles are being organized and libraries furnished with Czech literature. During the past year several lectures have been given under the auspices of the Komensky clubs. 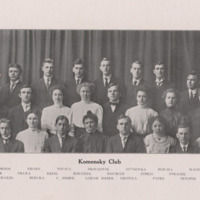 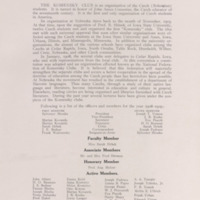