(Special Telegram to The Daily Nebraskan.)

Nampa, Ida., Oct. 19.- Cornhusker rooters on the special train bearing Nebraska University's football team and band to the Pacific coast, have enjoyed the spectacle of a doughty coach playing popular airs on the piano while his pupils scratch their heads over the best plays to be used against the Oregon Aggies Saturday.
For the coach has decreed that the lineup of me to enter the game when the whistle blows will very largely depend on who hands in the best outline of the way to direct the attack against the foreign foe. After his chalk talk in which he explained the attack that the Aggies are expected to develop, Stewart turned the task of planning the defense, and the counter-attack over to the Cornhuskers, and they are busy on the strategy of the coming game.
Coach Strums Piano
Meanwhile the coach himself lightly strums the piano, whenever he finds an opportunity to get his fingers on the keys. "Arrah Go On, I want to Go Back to Oregon" flies off the keyboard as Corey wonders whether he should box his man in or out. Stewart strikes up "Pretty Baby," and Rhodes and Riddell plan a gain of ten yards or so through tackle. And so it goes, with the team gaining added confidence and determination as the goal is neared.
One of the best incidents of the trip so far happened when the train pulled out of Laramie, Wyo., yesterday. Two of the members of the band, Pittman and Bush, had strolled off down the street to examine the Wyoming weather, or perhaps in some softer pursuit.
Whatever they were looking for, they had difficulty placing it, for it had not been found when the whistle blew and the train began to snort in preparation to pull out. Pitt and Bush started toward the depot on the run, and as they entered the yards the engine began to pull out. They fired up, but the stoker was doing likewise.
With comrades on the rear of the observation shouting and waving encouragement, Pittman put all the speed he possessed into his long legs, and Bush came following after. They gained and as the train left the siding, they simultaneously grabbed the step rail on the tail end car and pulled themselves aboard.
Jack Best Happy
Old Jack Best has been in the best of health, and is feeling fine. Some of the trainer's friends had feared when he started out that the trip would be too much for him, as his health is not of the best, but Jimmie has been fine all the way. And he is happy. As he watches his youngsters talk over the game in prospect, and as he hears the band swing into the University anthems, his eyes brighten and his smile grows broader.
The first arrival of the train in the depots along the way has caused little fervor, now that the Nebraska border has been passed. But before the wheels have ceased to turn, the band is off, and away on one of its most spirited tunes.
The effect has been magical. Townsfolk flock to the depot, and a crowd gathers around the band to applaud the efforts of the players. Few of them have heard as good band music, and the University is receiving the best kind of boosting because of the fine showing of its representatives.
Many Photographers
At every station almost a flock of photographers, amateur and otherwise, representing the newspapers, or simply out for the excitement, have been on deck to snap the team. The boys are getting used to posing, and line up almost by force of habit to be snapped.
In spite of the warning of Guy Reed, a few tried to bum their way out. At Julesburg two who thought they could get through with the band and who are said to have been Keyes and Schmidt, were detrained. The stowaways watched the special pull away from them and sadly turned their faces toward Nebraska.
Friday the train will make the trip down the beautiful Columbia river valley to Portland. On one side the board blue river, and on the other the mountains, will fascinate them. The daily practices will be continued.
The team is in the best of shape. The brief practices yesterday, when the boys ran through a stiff signal practice in jerseys and running trunks while the cold winds and snow made the goose-flesh rise on their bare legs have not suffered in the least from their arctic experience. 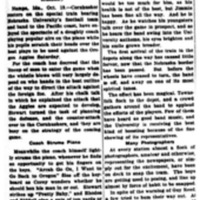