The Daily Nebraskan speculates over whether or not the Nebraska football team can pull off a win against the Oregon Agricultural College Aggies.

Will We Beat Oregon?, The Daily Nebraskan

When the University dair judging team won first place from seventeen other representatives, at Springfield, Massachusetts, last week, another worth-while honor was added to Nebraska's list. From fifty-four entrants, a Nebraska man won first place and another won fourth place. It is a proof of the excellent quality of instruction which the University offers, not only in the school of agriculture, but in every department of the institution.

The Oregon agricultural college daily has not been coming to the office, with the rest of the exchanges, lately. Are they printing dope they don't want us to know about, or are they afraid of us?

The rally last night was the best football "pep meeting" ever held at the University. Nebraska spirit swept the crowd in waves and the enthusiasm of everyone present was as contagious as a bargain hunt on Monday.
We are determined to beat Oregon. Much depends on it. It is not a blinding, brilliant display that we want from the team, it's real playing, and we have to have it. This is Nebraska's chance to win or lose in more than football. It is a crucial moment, and all of this week we must be with the team in spirit. This was realized last evening, and when the team pledged "For Nebraska, we will," everyone present felt that it was a true prophecy.
Nebraska students have "pep." Nebraska students have the right kind of enthusiasm. Nebraska students "will." 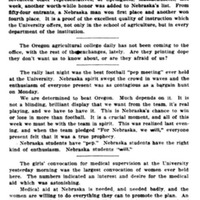