needed to distribute copies of the song and aid in successfully presenting it to the public, Ed Weird of the athletic department pointed out. Approximately 500 copies are now on hand and several thousand more can soon be had, he declared.
“I believe the grid song will go over in a big way.” Weird stated. “Students should soon obtain copies of the song and study and accept it.”
Words of the song are as follows:
“Rah! Rah! Rah! Rah! Rah! N-e-b-r-a-s-k-a, Nebraska boom! (Music optional thus far) Onward march for dear old Nebraska.
“Flying her colors true,
“Hail, all hail our alma mater, dear old Nebraska U.,
“Smash thru that line, touch-down this time,
“Kick, pass and run till the battle is won.
“Cheer boys, cheer, the fighting Huskers, marching on to victory.” 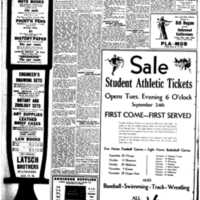