Bond No. 63 describing the University of Nebraska Dormitory Corporation's Student Activities Building Bond that aided the facilitation of the construction of the Student Union. These bonds were issued on February 1, 1937 and were to be paid in full by February 1, 1943. Each bond (two hundred in all) were worth one thousand dollars.

KNOW ALL MEN BY THESE PRESENTS: That The University of Nebraska Dormitory Corporation (organized under Article 15, Chapter 24, Compiled Statutes of Nebraska, 1929, for the purpose of erecting buildings for the use of the University of Nebraska), hereby acknowledges itself to owe, and for value received promises to pay to the bearer hereof on the first day of February, 1943, the sum of ONE THOUSAND DOLLARS in lawful money of the United States of America, with interest thereon from date hereof until paid at the rate of three and one-half per centum (3 1/2 %) per annum, payable semi-annually on the first day of February and August of each year on presentation and surrender of interest coupons hereto attached. The principal and interest of this bond are payable at the office of The First Trust Company of Lincoln, Nebraska, but only out of the funds hereinafter referred to.

THIS BOND is one of an issue of the aggregate principal amount of Two Hundred Thousand Dollars ($200,000.00) consisting of two hundred (200) bonds, numbered from 1 to 200, both inclusive, of like date, tenor and effect herewith except as to numbers and date of maturity, and is issued by the University of Nebraska Dormitory Corporation, for the purpose of financing part of the cost of construction of a building for student activities purposes on the City campus of the University of Nebraska; the estimated cost of said building is $400,000.00. All of said bonds are equally and ratably secured by an assignment to The First Trust Company of Lincoln, Nebraska, as Trustee, of all right, title and interest of said Dormitory Corporation under and by virtue of its contracts and leases with The Board of Regents of the University of Nebraska, providing for the construction of said building.

IT IS HEREBY certified and warranted that all conditions, acts and things required by law to exist or to be done precedent to and in the issuance of this bond, did exist, did happen and were done and performed in regular and due form and time as required by law.

BONDS numbered from 1 to 116, both inclusive, are not redeemable prior to maturity. At the option of the maker, on any interest payment date on or after February 1, 1942, bonds numbered from 117 to 200, both inclusive, may be redeemed by the payment of the face amount thereof with accrued interest to date of redemption. Redemption of bonds prior to maturity shall be made in inverse order of their serial numbers, the bonds bearing the higher serial numbers then outstanding being redeemed first.

IN WITNESS WHEREOF, The University of Nebraska Dormitory Corporation by resolution has caused this bond to be executed by its president, its corporate seal to be affixed and attested by its secretary-treasurer, and the interest coupons to be signed by its facsimile signature of its president, and the president does by the execution of this bond adopt as and for his own proper signature his facsimile signature affixed to said coupons. 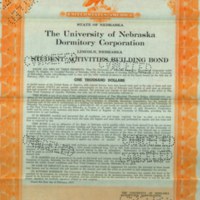 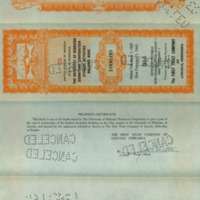