Two hundred sixty women, representing alumnae from eight decades, gathered last weekend for a banquet honoring on hundred years of sister of the Kappa chapter of Delta Delta Delta. The sorority is the fourth oldest on campus, it was founded in 1894 with eight members. The reunion attenddees spoke at the banquet about everything from rolling up the rugs for dances in the 30's to the ending of Ivy Day, the school yearbook, alumna Lynn Rober said.
"The chapter really mirrors the lives of young women through the years," Roper said.
The sorority was located in a variety of houses before the existing uilding at 16th and Rstreets was purchases in 1926 for $40,000.
The metal fence and gates around the house were given to the house by General John Pershing - the only male honorary member. Three of Pershing's sisters were Tri-Deltas.
Alot of history has been witnessed inside the house throughout the years.
"A group gathered around the radio in the Tri-Delta house, listening to reports of the Japanese attack on Pearl Harbor. (There was) gasoline rationing, sugar rationing and nulons were practically non-existant," alumnda Jessie Lou Tyler Allen said.
Some history of campus life has just started to change after decades of common experience for students. Registration is described in a 1920 excerpt from the chapter's history: "Registration at Nebraska presents itself into hours of seemingly endless lines. An official report has not been made, but rumors has it that 7000 students registered this year."
Positive aspects of sorority life as membership have been steady throughout the years, Roper said.
"The support of a close-knit group within a larger organization is the same as it was 100 years ago," Roper said.
Women attending the banquet came from as far away as California and Maine. Many have maintained close friendships for over the fifty years, she said. 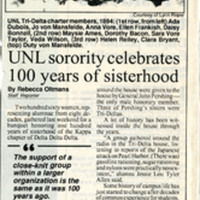