An article in the student newspaper, the Daily Nebraskan, reported on G.W.A. Luckey, petitions, and statements associated with disloyalty accusations, including a letter written by Luckey himself.

Dr. Luckey Denies He is Unpatriotic
Says He is Loyal to President and Democracy's Cause
DID NOT TEACH DISLOYALTY
Declares Star Insulted Patriotism of Nebraska Students by Insinuations
An expression of fealty to and faith in the president of the United States and a denial that he has been to his knowledge unpatriotic was made to The Nebraskan yesterday by Dr. G. W. A. Luckey, dean of the graduate school of education, who was called before the council of defense a week ago on the charge of making disloyal utterances.
The particular charge for which Dr. Luckey was called before the council came following an impromptu talk before the Open Forum club some time ago, in which he criticised the German school system. Dr. Luckey said that at the time the alleged disloyal statement was made he was scoring German autocracy and its dominance of the German school system. He is reported to have said in this connection that he would just as lief "live under a government run by kaiser Wilhelm as by kaiser Theodore." He declared that he was nor sure to his exact words, but meant to imply, not a comparison between Emperor William and any American, but to convey the incomparibility of the idea of autocracy. His thought was, he said, that even a benevolent despot was undesirable, and that the name of autocrat was immaterial.

Students loyal
The charge of disloyal teaching, about which council of defense members also inquired, was also denied by Dr. Luckey. He declared that such accusation was, if nothing else, "an incrimination of the patriotism of Nebraska students."
"I do not believe that a more loyal body of students and professors can be found anywhere in the country. Nebraska students would not countenance disloyal teachings for a moment," he declared.
The story in the Lincoln Star last Tuesday regarding a petition denying disloyalty in Dr. Luckey's classes insinuated that many of the professor's students were signing the paper to make sure of the credit hours. This story Dr. Luckey branded as an insult to the integrity of his students. They were not so easily bought, he declared. The accompanying rumor that Dr. Luckey himself started the petition was also denied by him. He said that he knew nothing of the paper until it was showed to him signed.

Conflicting reports
The conflicting stories coming from Dr. Luckey's students who denied that the professor had made disloyal utterances of any kind, and those coming from the Star, inferring his lack of patriotism and opposition to the war, started The Nebraskan's investigation. To the point blank question of whether he was loyal to the president of the United States and in sympathy with the cause of democracy, he replied in the affirmative. When definitely asked to tell what he had done in support of the war, he in order to determine the truth of a report that he was not so enthusiastic as he might be, Dr. Luckey would only say that he had given what he could afford. Independent investigation shows, however, that he purchased as many liberty bonds as any faculty member with the exception of Chancellor Avery, that he could also contributed liberally to the Red Cross, the Armenian and Siberian relief, and the Y.M.C.A.
The following questions, put to Dr. Luckey by The Nebraskan, were answered affirmatively:
Are you in sympathy at heart with the cause of democracy?
Are you loyal to the president in his war policy?
The following charges were denied by him:
Have you, to your knowledge, made unpatriotic statements to your classes?
Have you ever intentionally compared American and German governments to the detriment of the former?
Did you have anything to do with the petition circulated in your classes which declared that you had neither taught nor said anything unpatriotic?


Letter from Dr. Luckey
The editor of the Nebraskan has received the following letter from Dr. Luckey, in connection with the reporter;s interview:
"Dear Mr. Beede: For some time I have been under criticism in the very field I pride myself of being strongest. I do now know the animus and intrigue that are promulgating it, neither have I the time nor inclination to ferret them out. I am too busy and too much in earnest trying to make the young men and women more efficient and able to live better and truer lives. I am aware that anyone who really thinks and gives expression to his thoughts will meet with opposition, but in a democracy we should expect justice and fair play. I am not a formalist, and in speaking I am attracted by the thought and try to make clear my ideas without being conscious of the particular words in which they are clothed. For this reason the pure formalist may not see the truth that lies hidden.
"I think it is only fair to the conscientious doubters for me to state that I am absolutely sympathetic with the president in this war and deem it a great privilege to have such a worthy and trusted leader at this critical time. I have complete confidence in his wisdom, judgment, and genuine sympathy for his humanity, and from the first I have lived in harmony with this truth. As for the other criticisms I have nothing to say. Fortunately for my friends my past life has not been shady and will bear the closest inspection.
"Sincerely yours,
G. W. A. LUCKEY." 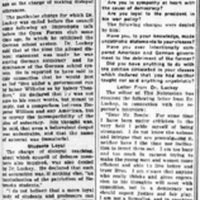