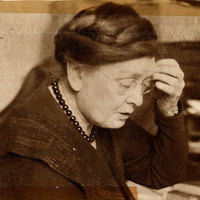 Louise Pound published “Traditional Ballads in Nebraska” in 1913 for the Journal of American Folk-Lore, a collection of traditional ballads recovered in her home state.   In 1922 Louise Pound published American Ballads and Songs. The book includes songs with exaggerated plots including jealous lovers and gamblers. The most characteristically American folk songs are slave and plantation songs, temperance songs, and campaign songs of the Civil War Period (Omaha). Pound grouped the songs in categories such as “English and Scottish Ballads in America,” “Native Ballads and Songs,” “Ballads of Criminals and Outlaws,” and “Dialogue, Nursery and Game Songs.” The songs may have no factual historical value, but do have sociological value because they convey an impression of society at the time they were written. These record traditions passed down through generations. On the surface they express social views held at the time while also expressing feelings of human nature from all periods (Omaha). In “A Syllabus of Nebraska Folk-Songs,” Pound writes about songs that have traveled from the Atlantic Coast to the Nebraska prairies; songs of the Pawnee tribe, Canadian voyagers, and European peoples about cowboys, tragedies, those lost at sea, homesickness and railroads. In “Traditional Ballads in Nebraska,” Pound lists traditional ballads that were recovered in Nebraska.  One of her articles, “‘Sir Andrew Barton’ in Nebraska”, is a recovered English ballad.