An Act to amend the established University

An Act to amend the established University

AN ACT To amend an Act entitled “An Act to establish the University of Nebraska.”

“To the funds received from these two sources there shall be added to the first two-thirds, and to the second one-third of the proceeds of all lands, or of all moneys acquired by donation or bequest, when other object is not stated, and of the fees for admission to the University, all money so received shall be invested as fast as five hundred dollars shall accumulate in such United States, or guaranted (sic) state stocks as will pay not less than six per centum annually, and the principal of such investments shall never be appropriated by the Legislature, or used by the Regents for any purpose whatever. The Regents’ fund shall consist of the proceed of the investment of the endowment fund, of the proceeds of annual rental of University and Agricultural College lands leased, the tuition and text-book fees of students, and of a tax of one-quarter of one mill on the dollar valuation of the grand assessment roll of the state, which shall be levied in the year 1872, and annually thereafter. 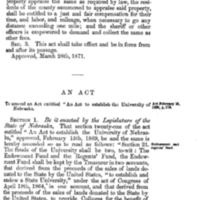 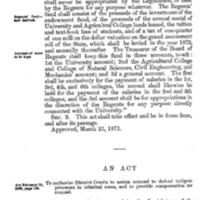