Joint Resolution accepting act of Congress of the United States (pages 308-312)-
This is a reprint of the original Morrill Act passed in 1862. The Nebraska legislature printed it in their records verbatim, with the final passage being a complete acceptance of the federal terms.

JOINT RESOLUTION Accepting Act of Congress of the United States.

WHEREAS, the Congress of the United States passed an act donating lands to the several State and Territories, which may provide colleges for the benefit of agriculture and mechanic arts, which said act is as follows:

An act donating Public lands to the several States and Territories, which way provide colleges for the benefit of agriculture and the mechanic arts.

SECTION 1. Be it enacted by the Senate and House of Representatives of the United States of America in Congress assembled, That there be granted to the several States, for the purposes hereinafter mentioned, an amount of public land to be appropriated to each State, a quantity equal to thirty thousand acres for each senator and representative in Congress, to which the States are respectively entitled by the apportionment of the census of eighteen hundred and sixty: Provided, That no mineral lands shall be selected or purchased under the provisions of this act.

SEC. 2. And be it further enacted, that the land aforesaid, after being surveyed, shall be apportioned to the several States in sections not less than one quarter of a section ; and whenever there are public lands in a State subject to sale at private entry, at one dollar and twenty-five cents per acre, the quantity to which said State shall be entitled, shall be selected from such lands within the limits of such states, and the Secretary of the Interior is hereby directed to Issue to each of the States in which there is not the quantity of public lands subject to sale at private entry at one dollar and twenty-five cents per acre, to which said State may be entitled under the provisions of this act, land scrip to the amount in acres for the deficiency of its distributive share, said scrip to be sold by said States, and the proceeds thereof applied to the uses and purposses (sic) prescribed in this act, and for no other use or purpose whatsoever: Provided, That in no case shall any State, to which land scrip may thus be issued be allowed to locate the same within the limits of any other State, or of any Territory of the United States, but their assignees may thus locate said land scrip upon any of the unappropriated (sic) lands of the United States subject to sale at private entry at one dollar and twenty-five cents, or less, per acre, and Provided further, that no more than one million acres shall be located by such assignees in any one of the States: and, Provide further, that no such location shall be made before one year from the passage of this act.

SEC. 3. And be it further enacted, That all the expenses of management, superintendence, and taxes from date of selection of said lands, previous to their sales, and all expenses incurred in the management and the disbursement of the moneys which may be received therefrom, shall be paid by the States to which they may belong, out of the treasury of said States, so that the entire proceeds of the sale of said lands shall be applied without any diminution whatever to the purposes hereinafter mentioned.

SEC. 4. And be it further enacted, That all moneys derived from the sales of such sale of the lands aforesaid by the States to which the lands are apportioned, and from the sales of land scrip hereinbefore provided for, shall be invested in stocks of the United States, or of the States, or some other safe stocks, yielding not less than five per centum upon the par value of said stocks; and that the moneys so invested shall constitute a perpetual fund, the capital of which shall remain forever undiminished, (except so interest to be far as may be provided in section fifth of this act,) and the interest of which shall be inviolably appropriated, by each State ,which may take and claim the benefit of this act, to the endowment, support, and maintenance of at least one college where the leading object shall be, without excluding other scientific and classical studies, and including military tactics, to teach such branches of learning as are related to agriculture and the mechanic arts, in such manner as the legislatures of the States may respectively prescribe, in order to promote the liberal and practical education of the industrial classes in the several pursuits and professions in life.

SEC. 5. And be it further enacted, That the grant of land and land scrip hereby authorized shall be made on the following conditions, to which, as well as to the provisions hereinbefore contained, the previous assent of the several States shall be signified by legislative acts:

First, If any portion of the fund invested, as provided by the foregoing section, or any portion of the interest thereon, shall, by any action or contingency, be diminished or lost, it shall be replaced by the State to which it belongs, so that the capital of the fund shall remain forever undiminished; and the annual interest shall be regularly applied without diminution to the purposes mentioned in the fourth section of this act, except that a sum, not exceeding ten per centum upon the amount received by any State under the provisions of this act, may be expended for the purchase of lands for sites or experimental farms, whenever authorized by the respective legislatures of said States.

Second, No portion of said fund, nor the interest thereon, shall be applied directly or indirectly, under any pretence (sic) whatever, to the purchase,

Buildings, erection, preservation, or repair of any building or buildings.

Third, Any State which may take and claim the benefit of the provisions of this act shall provide, within five years, at least not less than one college, as described in the fourth section of this act; or the grant to such State shall cease; and said State shall be bound to pay the United States the amount received of any lands previously sold, and that the title to purchasers under the State shall be valid.

Fourth, An annual report shall be made regarding the progress of each college, recording any improvements and experiments made, with their cost and results, and such other matters, including State industrial and economical statistics, as may be supposed useful; one copy of which shall be transmitted by mail free, by each, to all the other colleges which may be endowed under the provisions of this act, and also one copy to the Secretary of the Interior.

Fifth, When lands shall be selected from those which have been raised to double the minimum price in consequence of railroad grants, they shall be computed to the States at the maximum price, and the number of acres proportionally diminished.

Sixth, No State while in a condition of rebellion or insurrection against the government of the United States shall be entitled to the benefit of this act.

Seventh, No State shall be entitled to the benefits of this act unless it express its acceptance thereof, by its legislature, within two years from the date of its approval by the President.

SEC. 6. And be it further enacted, That land scrip issued under the provisions of this act shall not be subject to location until after the first day of January, one thousand eight hundred and sixty-three.

SEC. 7. And be it further enacted, That the land officers shall receive fees for locating land scrip issued under the provisions of this act, as is now allowed for the location of military bounty land warrants under existing laws, Provided their maximum compensation shall not be thereby increased.

SEC. 8. And be it further enacted, That the Governors of the several States to, which scrip shall be issued under this act shall be required to report annually to Congress, all sales made of such scrip until the whole shall be disposed of, the amount received for the same, and what appropriation has been made of the proceeds.

AND WHERAS, That by act of Congress approved July 23, 1866, entitled an act to amend the fifth section of an act entitled an act donating public lands to the several States and Territories, which may provide colleges for the benefit of agriculture and the mechanic arts, approved July 2, 1862, so as to extend the time within which the provisions of said act shall be accepted and such colleges established. It is provided that when any Territory shall become a State, and be admitted into the Union, such new State shall be entitled to the benefits of said act of July 2, eighteen hundred and sixty-two, by expressing the acceptance therein required within three years from the date of its admission into the Union, and providing the college or colleges within five years after such acceptance as prescribed in said act. Now, therefore, 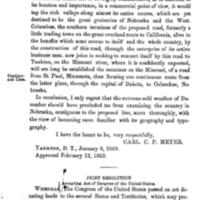 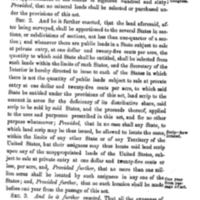 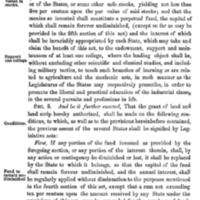 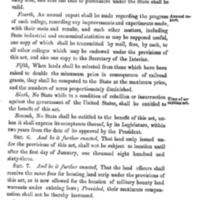 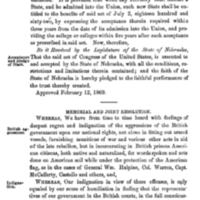