An Act to provide for the Registry of School Lands…

An Act to provide for the Registry of School Lands…

An Act to provide for the Registry of School Lands… (Sections 5, 17, 26, 27)-
The state of Nebraska was sure to cover as many points as possible in relation to public land received from the federal government. This act lumps together “general schools”, what would later become public schools, and the university. The act specifies in length the bureaucratic procedures that were to be taken to ensure the value of the lands would forever go “undiminished.” In short, all proceeds from land sales were to be directed to the treasurer of the State. In turn the treasurer would invest the proceeds in United Sates or State securities, which were to bear not less than six per cent annual interest. The annual interest then supplemented the university fund.

AN ACT TO PROVIDE FOR THE REGISTRY OF SCHOOL LANDS, FOR THE CONTROL AND DISPOSITION THEREOF, AND FOR THE SAFE KEEPING OF THE FUNDS DERIVED FROM THE SALE AND LEASE OF SAID LANDS.

SECTION 5. When the selection of University and Agricultural College Lands made as herein or otherwise by law provided, and the selection of lands in lieu of sections 16 and 36, in the several townships, wherein they have been pre-empted, have been confirmed by the Department at Washington, or are properly ascertained to be under the control of the authority of the Sate, the Land Commissioner shall make a registry of the school and university lands, the agricultural college lands being entered in the book of university lands as a part thereof, ion separate books to be provided for the purpose: Provided, That nothing in this section shall be construed to prevent the disposition of such common school lands as the State may have an unquestioned title to, as soon as the same may be registered according to the provisions of this act.

SEC 17.  The county commissioners of the several organized counties are hereby authorized and directed to lease the common school and university lands within their jurisdiction at any time- except that timbered lands and lands held by resident occupants shall not be leased until after they shall have been offered for sale as hereinafter provided-upon the following terms: The lessee shall give his or her obligation and contract that the lease money shall be fully and promptly paid annually in advance (the first payment being computed to the first of January n ext ensuing); that no waste shall be committed upon the land, and the premises shall be surrendered at the expiration of twenty five years from the 1st day of January next ensuing, after the date of the lease, or sooner with the consent of the county commissioners; that the lessee will pay for the use of said land the annual rate of six per cent upon the appraised value thereof; that at the expiration of five years from the date of the lease, and every five years thereafter, the land shall be appraised by three persons one of whom shall be appointed by the county commissioners, one by the lessee, and the third by the other two, and that valuation made by such appraisers, shall (provided it be not less than the former appraisement) be the basis of the rental for the five years succeeding the next first day of January.

SEC 26. All moneys received as advance or full payments by purchasers of school lands shall be paid, by the officers receiving said money to the Treasurer of the State, specifying whether said money is for common school or university lands, which shall be filed by the Land Commissioner, and the other shall be retained by the person paying over the money.  Such moneys shall be held as the principal of the general school fund, or as principal of the university fund, as they have been derived from the disposal of common school or university lands; and all such moneys, and all such moneys, and all other moneys derived from fines assessed for breaches of the penal laws of the Sate, and all forfeitures which may accrue from lands and other estates which shall escheat to the State for want of heirs or kindred entitled to the inheritance, from all lands which have been, or may hereafter be granted to the State, when no special purpose is express in the grant; and all unclaimed fees, which said other moneys shall belong the common school fund, shall be, by the Governor, Land Commissioner, and Treasure of the State, invested in United State or State securities, which shall bear not less than six per cent annual interest, and all bonds, in which the common school or university funds of the State of Nebraska shall be invested, shall be endorsed across the face thereof, in red ink: “School (or university) funds of the State Nebraska,” which endorsement shall be signed by the Land Commissioner, and said bonds shall not be sold or otherwise disposed of, expect by order of the Legislature, in a public act, and they shall in no wise, be held as applicable to, or security for the pay of any indebtedness of the State of Nebraska.

SEC 27. All moneys derived from interest upon notes given in lieu of cash payments for school or university lands, shall be paid into the State treasury to be by the treasurer accounted for as common school or university funds, as they have been derived from common school or university lands, and such funds shall by the treasurer of State be reported to a board consisting of the Auditor, Governor, and Secretary of State, which said board shall proceed, on or before the first day of October, in each year, to distribute the same to the several organized counties in the State according to the number of children between five and twenty-one years of age in each county. 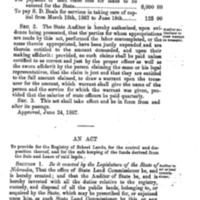 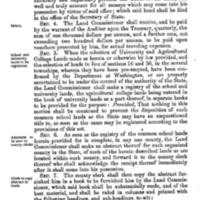 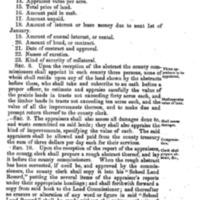 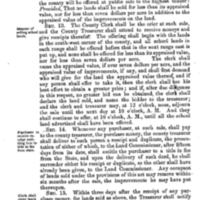 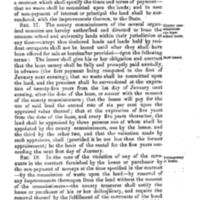 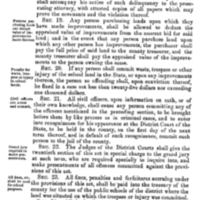 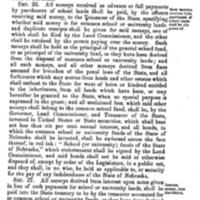 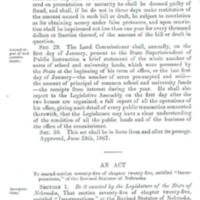 Nebraska Legislature, “An Act to provide for the Registry of School Lands…,” Nebraska U, accessed January 17, 2022, https://unlhistory.unl.edu/items/show/403.