A published collection of the Board of Regents' minutes.

(Pp. 4-5)
The Committee for Land Selection suggested to the state legislature, that the federally endowed land be sold or leased as soon as possible. Thus the profits may be invested and the annual dividends could supplement the university fund.

Third Report of the Board of Regents, 1874

The Agricultural College as a co-ordinate branch of the University will also demand the attention of the Board. The requirements of the law creating these national schools make it necessary to provide for opening this College in the immediate future. It is important to determine accurately the limit of time prescribed by law, and not to allow the land grant to revert to the general government in consequence of neglect.

Lands have been selected near the capital for an Agricultural farm, and for the general interest of the University.

During the present summer a portion of these lands should be plowed, so that next year they may be available for cultivation. Should it be found necessary according to law, and deemed advisable by the Board to organize the Agricultural College next year, in my judgment an appropriate course of study can be conducted with buy little additional expense to the University.

It is unnecessary to enter on any details until the time of opening may be fixed by the Board.

It is also a matter of importance to manage the lands of the University, so that at the earliest time possible some revenue may be derived from their sale or lease. If they could be sold, as are the railroad lands, on long time, the interest being paid annually in advance, the university might at once become in a considerable degree self-sustaining; or by leasing the lands most favorably located, with the privilege of purchase at the expiration of the lease, some revenue would be derived therefrom (sic) and the value of the land enhanced.

During the present session of Congress a bill was introduced granting to each Agricultural College, organized under the law of 1862, a million of acres in addition to the amount already received.

This bill is now so modified as to give 500,000 acres to each Agricultural College, and there is but little doubt of its final passage. I have maintained quite an extensive correspondence with Educators on this subject, also with members of Congress and am sanguine of its final adoption. 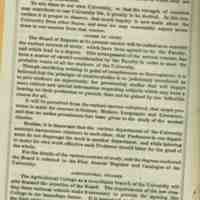 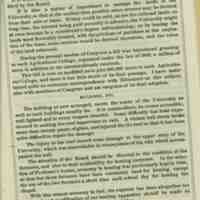