The regents request that the process of surveying and allocating land be sped up, so that a steady income may be provided to the university. Additionally, the regents declare their intent to foster a university that is not solely fixated upon agricultural issues. Rather a serious focus should be dedicated to the "...education of the industrial classes in the several pursuits and professions in life."

Fourth Report of the Board of Regents, 1877

The regents desire to call attention to the pressing necessity of some legislation looking to a speedy realization of some income from the endowment lands. While it is undoubtedly true that a very small amount of these lands can at present, and perhaps fro some years to come, be sold, under the restriction in the Constitution, yet a large amount of them may be leased, and thus something be derived therefrom (sic) for the income of the University. It is to be hoped that this subject will receive, as it deserves, the very early and careful consideration of the Legislature.

The regents take this method also of calling attention to that portion of the Landed Endowment, comprising the ninety thousand acres of land, granted, as the law of Congress declares, “For the endowment, support, and maintenance of at least one college, where the leading object shall be-without excluding other scientific and classical studies, and including military tactics-to teach such branches of learning as are related to agriculture and the mechanic arts, in such manner as the legislatures of the states may respectively prescribe, in order to promote the liberal and practical education of the industrial classes in the several pursuits and professions in life.”

Under this provision, while it is well to have a farm in connection with the University, in the cultivation of which practical agriculture may be taught, yet manifestly, the Act of Congress above mentioned does not restrict the income from those lands to such uses entirely or chiefly.

It would certainly seem to be foreign to the true intent and spirit thereof to devoted the whole of such income, or the principal part thereof, in the management of a large farm-rearing stock and growing grain for the market.

The regents submit if the cultivation of a fewer acres of land would not meet the requirements in this regard, while the remainder of such income could be devoted to the broader purposes contemplated by the act above mentioned, viz. : “The education of the industrial classes in the several pursuits and professions in life.”

The more careful consideration of this subject, so soon as this grant becomes available for the purposes of income, will become pertinent. 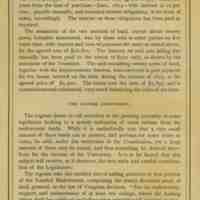 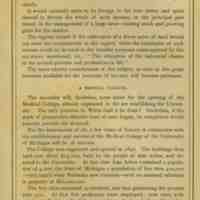